It’s pear season y’all! I’ve been allowed to harvest a few pears from trees around town so I’ve been making and canning lots of pears. From RancherMan’s favorite Pear Preserves as well as my fave: Pears in Light Syrup. (links at the bottom of the post)

We’ll enjoy them all winter long and some jars could also end up in a few of our Homemade Christmas Baskets this year. But a friend mentioned she had several pears that were given to her and she was going to make a pear cake with them.

I’d never even heard of pear cake, and I wasn’t sure I was even tempted by the thought. But a couple of days later I met up with her and she said she’d made the cake and asked if we wanted to try it. Hummm… Pear cake??  Sure, I guess…

WOW – it was amazing, all cinnamon & spice fall-tasting deliciousness with soft chunks of pear. And RancherMan went crazy over it. So of course I wanted to make it for him. Thankfully she shared her recipe with me (thanks Sue!) 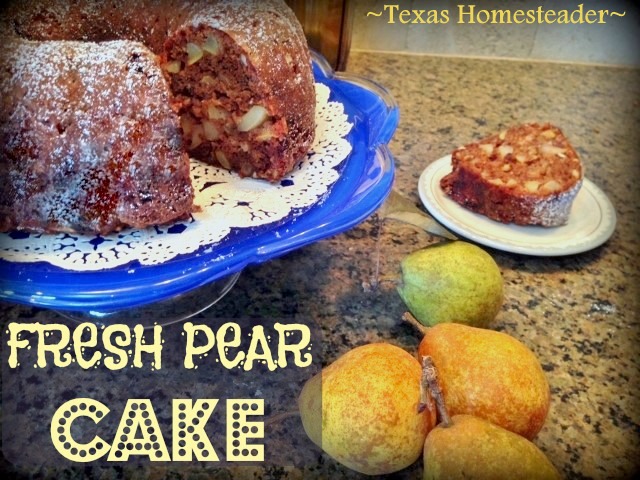 Now I amended her handwritten recipe since it didn’t indicate what size pan to bake it in. (although she did tell me that a tube pan would be appropriate.)

Plus since it was plenty moist with all that fruit included I substituted the oil in her recipe with applesauce.  I also reduced the amount of nuts and also added a bit of vanilla.

So I’ll share the recipe as I amended it.  RancherMan says it’s delicious and it’s a KEEPER!

First I washed several ripe pears and chopped & cored 4 cups worth.   My friend told me I didn’t even need to peel the pears so I didn’t.

Then I used a fork to mix up 2 eggs in a small measuring cup & poured them over the chopped pears.  I used my big honkin’ rubber spatula to mix everything together.

Then I added two cups of sugar, 1/2 cup Homemade Applesauce, 2 Tablespoons cinnamon, 2 cups of flour, 2 teaspoons of baking soda, 1 tsp vanilla, 1 tsp of salt and 1 cup of chopped nuts, stirring with my spatula after each ingredient was added.  That’s all there is to it y’all!

I allowed the cake to cool for about 15 minutes in the pan before inverting the tube pan onto a plate to release the cake and allow it to completely cool.

Then I sprinkled a little powdered sugar on top just to make it prettiful and served up a warm slice to RancherMan.  His verdict?  DELICIOUS!

Since my friend told me these cakes freeze beautifully I’ll also make one for the freezer. That way I’ll have a homemade cake ready for unexpected company.

What a delicious way to use up those fresh pears of the season! 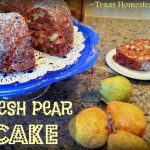 Do you find yourself with a bundle of those fresh delicious pears?  Make pear cake.  It's surprisingly moist & delicious! #TexasHomesteader

C’mon by & sit a spell!  Come hang out at our Facebook Page . It’s like sitting in a front porch rocker with a glass of cold iced tea.  There are lots of good folks sharing!  And you can also follow along on Pinterest,Twitter or Instagram