by  Texas Homesteader
*this post contains an affiliate link

A sweet friend invited me to come pick some of the pears from her huge pear tree recently and of course I jumped on that offer! RancherMan & I showed up at her house armed with a feed sack that typically holds 50 lbs of feed. We proceeded to fill that bad boy up with pears! I promised to bring back some canned pears for her. But she said she’s had all the pears she wishes to have this year. LOL.

So we thanked her profusely, waved goodbye and came home to begin processing all those pears. Of course the first thing I canned was a couple of batches of pear halves in light syrup. I love to eat these right out of the jar cold from the fridge.

But how else can I preserve these delicious pears? RancherMan loves the pear preserves typically made by a close friend. So I called her up & asked if she would share her recipe. Being the sweetheart that she is, she did! And she said I was welcome to share the recipe with you.  (Thanks Virginia)

to get me through it quickly. I don’t know what I would do if I had to peel that many pears with a paring knife! I found that I could peel, core & slice a pear in 5-7 seconds!  WOO-HOO, watch me go!

The first double-batch of preserves I made I followed the recipe exactly. But it seemed to have too much syrup and I had to boil the pears over 2.5 hours to get it to the consistency I wanted.

I asked Virginia about this & she said

it appeared my pears were very ripe so I should try it again with the same amount of sugar but less water & slightly more pears per batch.

So for my second double-batch I peeled cored & chopped about 10 cups of pears instead of 8. I dropped them into a solution of Fruit-Fresh & water to keep them from turning dark.

When I had the pears prepared I pulled out my big stock pot & stirred 3 cups sugar into only 1 cup water this time. It did seem to help the quantity of syrup.

When the syrup had boiled about 10 minutes I added my prepared pears and a few slices of lemon. I only boiled the pears this time for about 1 hr 15 minutes.

When they were as thick as I like I stirred in a tablespoon of vanilla & ladled the preserves into hot washed & sterilized jars, wiped the rim and placed the two-part canning lid in place. These jars can now be sealed in a hot-water bath for 10 minutes.

The resulting pear preserves this second time were a lighter color. Maybe because I didn’t simmer the pears as long, although I really love the golden color of the first batch too. Both were absolutely delicious! 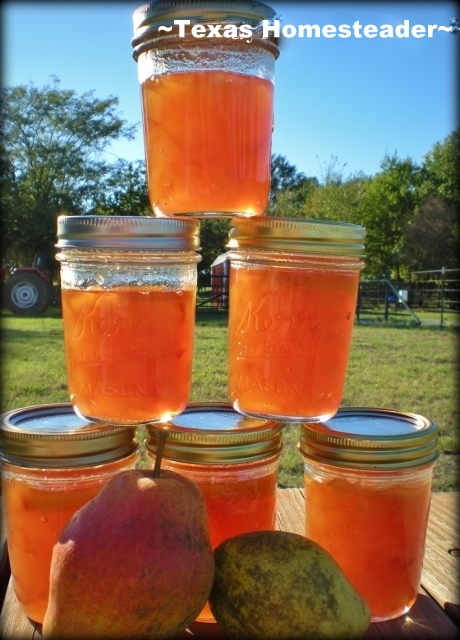 Virginia warned me not to try to make more than a double batch at a time so I heeded her advice and made two double batches. The double-batches I made yielded 6 half-pints. 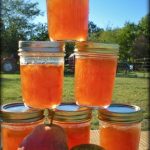 This delicious recipe yields 3 half-pints of pure bliss. I always double it! The recipe was shared by a dear friend and is RancherMan's absolute favorite preserve.  I'm happy to make it for him every year.

Note from Ms. V: This recipe comes from my mother's Kerr canning book circa 1938. It is a slow process but so worth it.

Thanks Virginia – you’re the BEST!

* A word about our Affiliate Link – We are currently enrolled as an Amazon Affiliate.  Occasionally I will insert an affiliate link into one of my posts if I think it may be of interest to you.  I  receive nothing from the manufacturer and I only link to products that I have used & love and feel you might love too. If you click on any of my affiliate links and buy something (almost anything, not just what was linked) I get a small referral percentage from Amazon.  But here’s the really important part – the price you pay for your items is UNCHANGED.
When you buy something through the affiliate link it’s a great way to support this blog. Nothing extra comes out of your pocket so please click often!