Although it takes a little time to make homemade tamales, it’s a very easy process. PLUS I have an Instant Pot shortcut option too! Come see my step-by-step directions complete with photos and recipe. 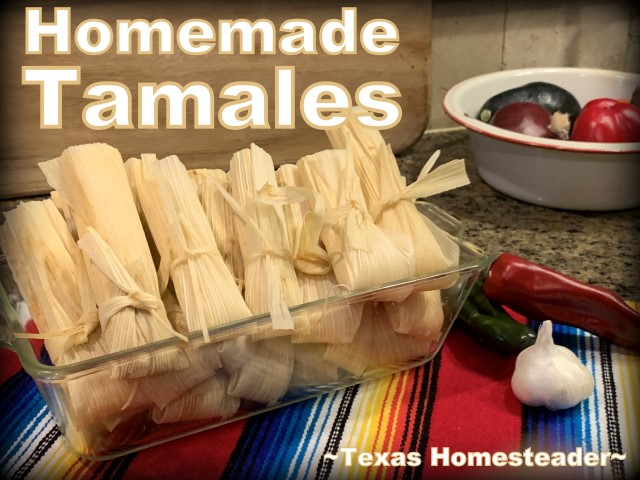 (Note: Links preceded with * are affiliate links. If you click and buy something I could receive a tiny commission.)

RancherMan & I love tamales. As a matter of fact, tamales are RancherMan’s favorite Tex-Mex food. And heck with his mad hunting skills, we always have pork in the freezer from the Wild Hogs that cause so much damage to our property.

It’s pretty common for me to cook up all those pork roasts at one time and quickly Shred The Roast with my KitchenAid mixer. That way I have cooked, shredded roast in the freezer at any given time for all manner of our favorite Mexican-themed meals, whether Pulled Pork Enchiladas, even easier Enchilada Casserole or maybe Carnitas Tacos.

But now we were in the mood to make tamales, although we hadn’t made them in about 15 years or so. Time to dust off those skills and put a few tamales in the freezer!

Homemade Tamales Are Simple To Make

First let me say: Yes it’s true, making tamales is time intensive. But what it lacks in time savings it shines in simplicity.

There’s nothing difficult about making tamales. Oh, & although you can totally still steam them for an hour (which is traditional) I’ve shortened the time in less than half by using my Instant Pot shortcut.

Here’s the abbreviated instructions if you already have meat cooked/shredded like we do: (otherwise cook & shred the meat the day before)

See? Nothing hard. But like I said, it does take a little time time.

If you don’t have cooked/shredded pork in the freezer, the day before making tamales is a good time to do that.

Cook the pork roasst the way you like it with onions, peppers, etc. But I wouldn’t add any flavors that might interfere with flavors of your tamales. Stick to seasonings like chile powder, garlic, cumin, etc.

Our Pork Roast was Smoked & shredded and placed in the freezer beforehand. So all I had to do is take it out of the freezer to thaw.

The night before is also a good time to prepare your corn husks. The tamales roll up much easier with previously-soaked husks.

We took them out of the bag they were purchased in and submerged them in a large pot of water. Then we placed a slightly-smaller pot on top to weigh them down and left them to soak overnight.

How We Altered Our Shredded Pork

Now traditionally tamales are made with shredded pork. And of course our pork was cooked & shredded already. But I wanted a finer texture to our tamale meat. So we took this extra step, but it’s totally optional.

We took our cooked shredded pork & pressed it through a meat grinder on the coarsest grind blade. 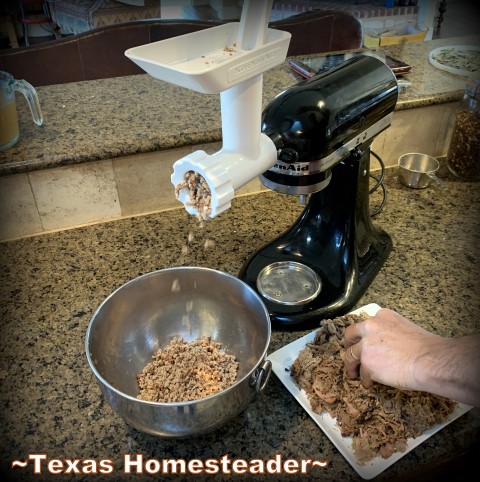 The resulting meat was less stringy and more dense. I think I prefer this texture in the tamale meat. But again, this is an extra step and totally optional.

Now your roast is cooked & shredded and your corn husks are soaked & ready to go. Let’s make those tamales!

First I made the chile sauce. The resident tamale expert at our local grocery store recommended dried *Guajillo chiles, so that’s what I purchased.

I also purchased a pound of lard, some Maseca Tamal brand of masa corn flour and a bag of dried corn husks. I’d already made a ton of homemade broth so there was no need to buy that. 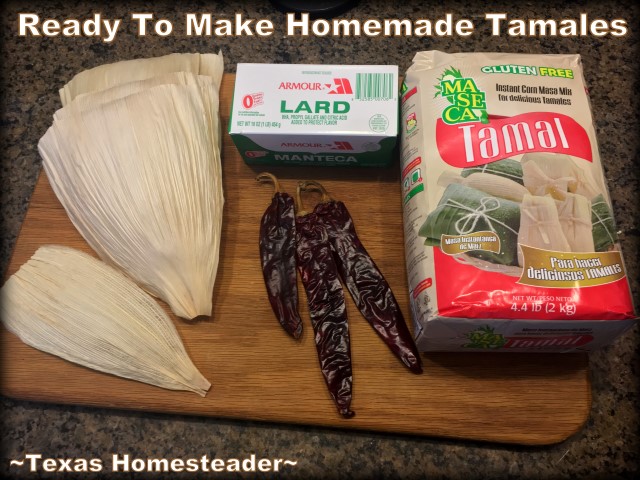 So to make my chile sauce, into a pot I added 2 cups of my homemade broth, 5 stemmed, seeded & chopped dried Guajillo chiles, a large chopped onion and 3 pressed garlic cloves.

I allowed the mixture to simmer uncovered for 20 minutes.

After that 20 minutes was up, turned off the heat & let the mixture cool. Then I used my *Ninja Blender to puree the mixture as finely as I could.

Finally I used a sieve to filter away any remaining solids.

I was left with a delightful aromatic deep red chile sauce. I’ll use this to flavor my shredded pork and also add a hint of flavor/color to my masa. 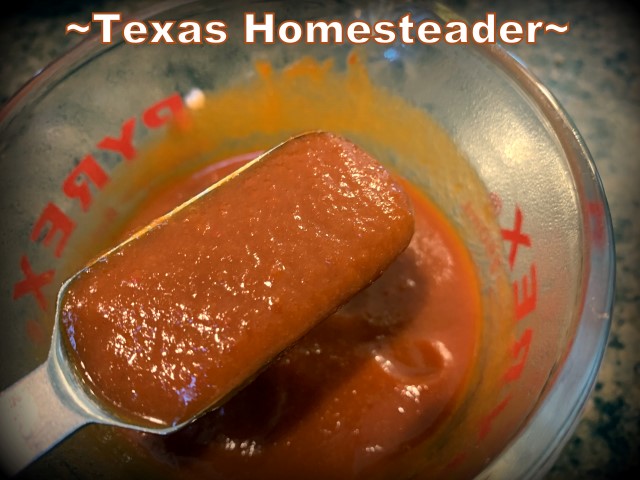 TIP: When my simmered peppers, onions & garlic were cooked and cooled I poured some of the liquid into a separate cup before dumping the rest into my blender to make this sauce. I feel the result was a thicker sauce with more concentrated flavor. I still have the liquid that I separated if I need more for my recipe.

We pulled out one of the blocks of lard and used half of it for our batch of masa. Some say you can substitute shortening here, but I’ve always read lard is best and most authentic. So that’s what we used.

Into a bowl we added 3 cups corn masa flour, a quarter cup of my chile sauce and 1.75 cups of broth. This was all mixed thoroughly to make a soft, firm dough. Then we sat the bowl aside.

Into the *KitchenAid Mixer we added the room-temperature lard, some salt and baking powder and used the whip attachment to whip it until it was completely incorporated and kind of fluffy.

Finally we added the masa mixture and switching to the paddle attachment we blended it all together for about 5 minutes. 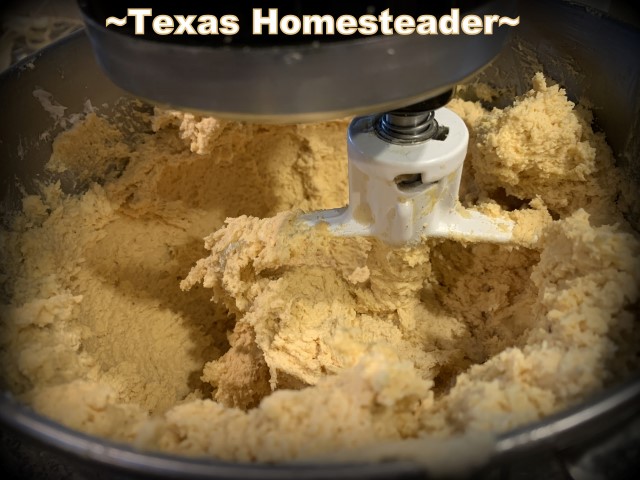 Then we covered the bowl of masa and into the refrigerator it went for about an hour. RancherMan felt this chilling of the masa dough made it easier to work with.

When an hour was up we brought our masa back out & once again used the mixer’s paddle attachment to mix it with our KitchenAid.

When we felt it was perfectly smooth and light, we took a small ball of masa dough and placed it in a cup of water. If the masa floats, it’s ready. 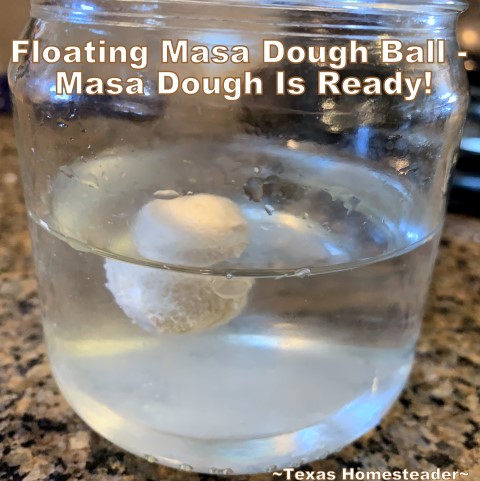 Now it’s show time! We took our soaked corn husks out of the water and placed them in a colander to allow the water to run off of them.

Then we laid several out on a kitchen towel to allow them to air dry a bit more while we assembled the tamales.

RancherMan preferred the scraper, but our resident tamale expert said she just uses a spoon. So there’s lots of flexibility here – use what’s easiest for you. 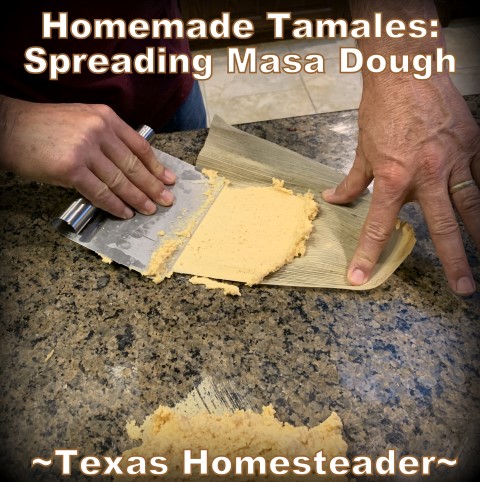 We spread the masa in a pattern of about 4″ wide and 5″ long on a corn husk. It’s best to leave some bare husk areas at the top and at least 1/2″ from the sides of the husk to make it easier to roll up and cook.

Then I placed between 1.5 & 2 tablespoons of my prepared meat filling in a line at the center of the masa dough. I used my fingers to quickly shape the meat along the length of the masa. 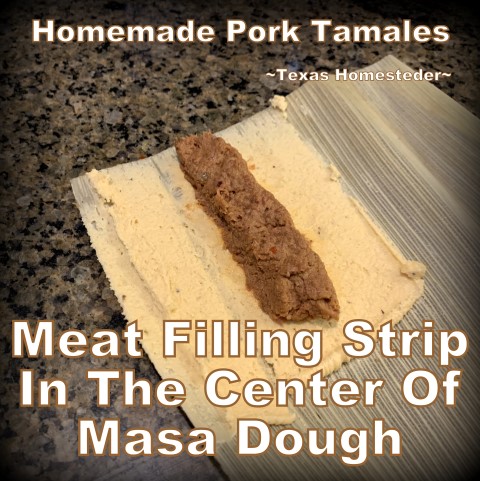 To fold the corn husk I started at one edge and folded it over the meat. I made sure the masa from the edge touched the masa on the other side of the meat, then just continued rolling to the end of the corn husk.

When the husk was rolled I folded the bottom up, starting where the masa ends. This creates a little pocket for your tamale to cook.

Although it’s optional, I used a small strip of corn husk to tie the tamale in place. 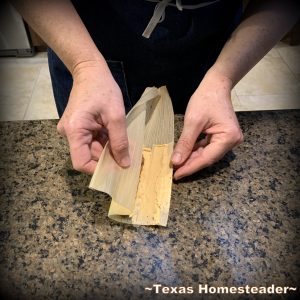 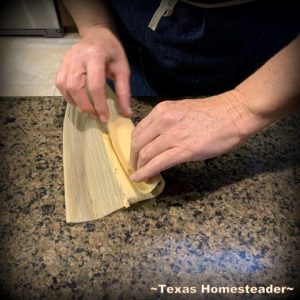 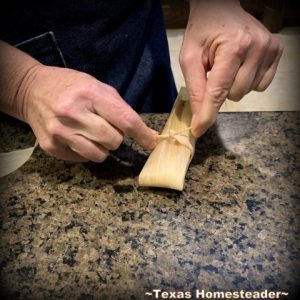 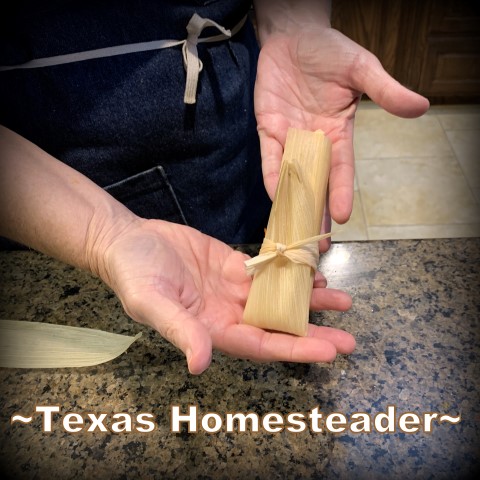 Now that your tamales are assembled it’s time to cook them. Traditionally they’re all placed in a steamer pot and steamed for an hour. If you don’t have an Instant Pot, go ahead & steam them in a large pot.

But since I have a *6-Qt Instant Pot I’m using that bad boy now to once again simplify my kitchen tasks!

I first put 2 cups of water in the bottom of my IP’s inner liner, then added a metal trivet. Onto the top of the trivet I placed a layer of corn husks that were too small to be used for our tamales. Nothing wasted!

I read it’s best to lean the tamales to keep moisture from accumulating in the open ends. So I placed a small 1/2 pint canning jar in the center to lean them against.

Helpful Hint: I learned that if the jar’s placed open-end down it siphons the water into the jar. So I make sure to place the jar open-end up and it works well.

Now I take all my assembled tamales and place them in my Instant Pot, leaning them against the canning jar. When I had them loaded in, the pot looked like this: 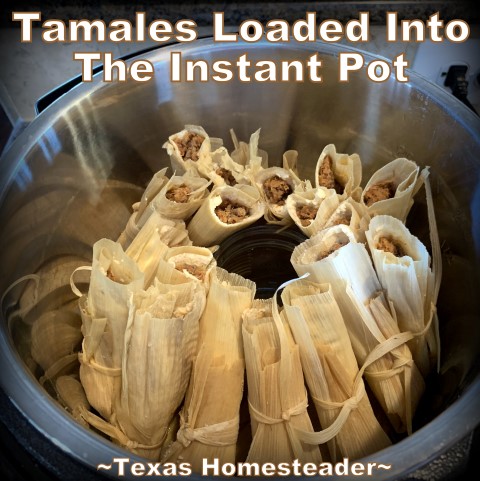 Then I used more of those unused corn husks to put on top of my tamales. This keeps condensation from the IP lid from dripping into them and making them soggy. Just another step to assure your homemade tamales turn out great!

I didn’t want to squeeze the tamales in, just lay them inside lightly. So I could fit about 1.5 dozen tamales in each IP load. That means to cook 3 dozen tamales I only loaded up my *6-Quart Instant Pot twice. So easy!

Then I put the lid on my instant pot, switched the lever to ‘sealing’ and selected ‘Pressure Cook” for my tamales. I set the time for 20 minutes and then waited.

The Instant Pot will automatically come to pressure and then start cooking for the designated time.

When the timer went off I allowed the tamales to stay in the covered Instant Pot for 10 more minutes before doing a quick release of the remaining pressure.

I opened the IP and used tongs to carefully remove the tamales. They were each placed on a rack sitting atop a cookie sheet to catch any drips. 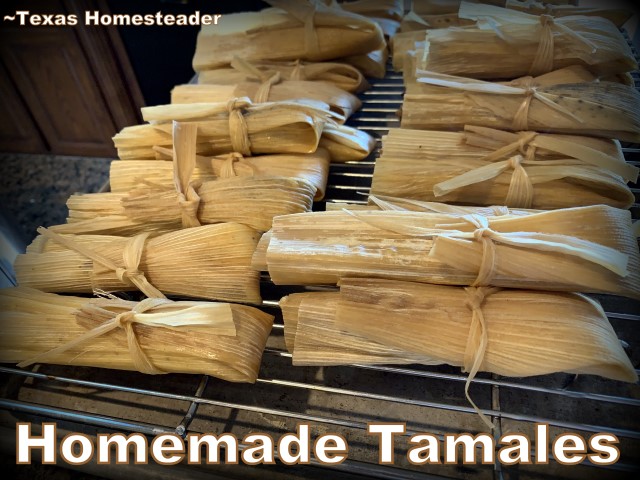 You’ll need to let your homemade tamales cool at least 10 minutes or so to firm up the masa before eating. Enjoy! 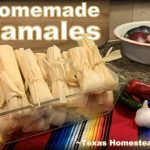 2 thoughts on “Homemade Pork Tamales – Quicker In An Instant Pot”