Looking for a fast supper idea? Chicken Pot Pie from scratch is super fast when you use leftover chicken. I made the pie crusts & cream of chicken soup from scratch too but you can use purchased crust & soup instead if you like. Fast, easy & DELICIOUS! 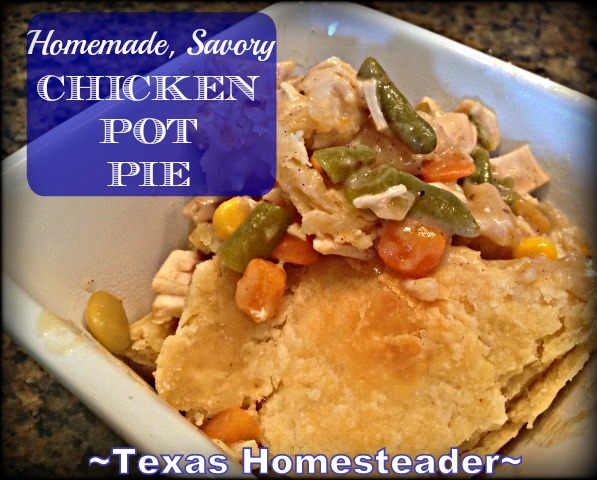 A few days ago RancherMan & I were delighted to receive a visit from two of our children and  two of our grandchildren. For some reason I seem to always stress about the food when we have company – what to serve? Will there be enough? Will they like it?

On this day I was hoping to make something in the slow cooker so that I could spend more time visiting with our kids and grandbabies. So I decided on an inexpensive $5 whole chicken because I knew I could make a delicious Slow-Cooker Chicken, only I’d leave out the heavy spices for the grandchildren’s sake.

Our chicken dinner was delicious. The next day I pulled the meat from the bones & cooked the carcass into healthy chicken broth. (6 pints!) Then I sectioned the leftover meat into three hefty meal-sized portions for RancherMan & me.

Now that’s a lot of mileage from one $5 chicken! With one of the three portions of leftover meat I decided to make some homemade chicken pot pie for supper.

I wanted to make my chicken pot pie from scratch. Sometimes I use my standby Homemade Pie Crust except I use bacon grease instead of shortening for a savory twist.

But more often than not I whip  up a simple oil-based crust. This kind of crust is easiest because I can simply mix it up & press half on the bottom/sides of the casserole dish. That means I don’t have to roll the crust out and gently transfer to the casserole dish without cracking it. (I suck at that!)

Of course I do still have to roll out the top crust for ‘pretty’, but at least I cut that chore in half. The pie crust shown in the recipe below is almost always the one I use for my chicken pot pie.

So I divided the crust dough in half and pressed half of the dough onto the bottom & sides of my dish. 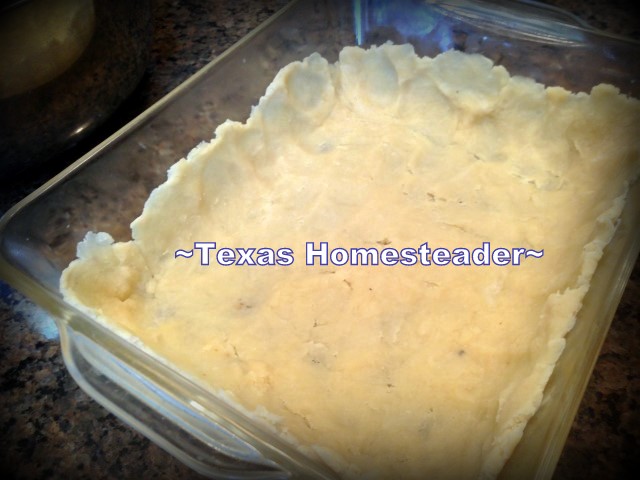 Then I chopped up about 2 cups of leftover chicken and laid it over the dough. Then I opened up two standard-sized cans of mixed vegetables, drained them and poured the vegetables on top of the chicken.

Finally I made cream-of-chicken soup using chicken broth, milk and flour. As soon as it was as thick as I wanted I pulled it off the stove and poured it over the chicken & vegetables. 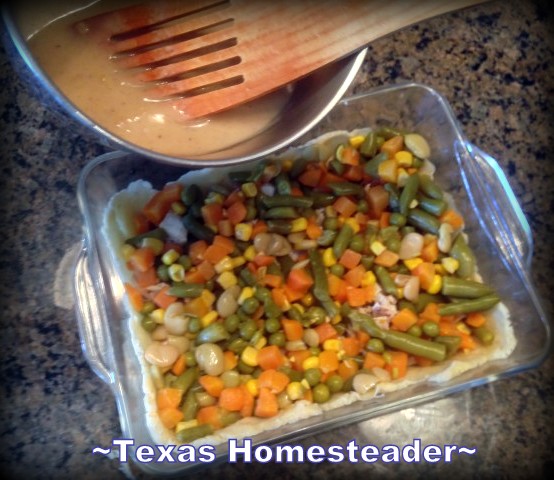 Finally I rolled out the last half of the crust and placed it on top making several slits in the crust to allow steam to escape. With the leftover pastry trimmings I rolled a rope to edge my chicken pot pie, placing shallow decorative slashes in the dough to make it ‘prettiful’.

Mama always told me that half the meal is in the presentation. So I always try to make it look nice for my handsome RancherMan.

Now all that’s left is to put this dish of homemade deliciousness into the oven. I wanted to use my table-top toaster oven to cook it so I could place it outside on a folding table and keep that cooking heat OUTSIDE where it belongs!

Since the heating element in the tiny oven was so close to the crust I covered the top with foil for the first half of cooking and then removed the foil so the the crust could brown beautifully during the final cooking time. 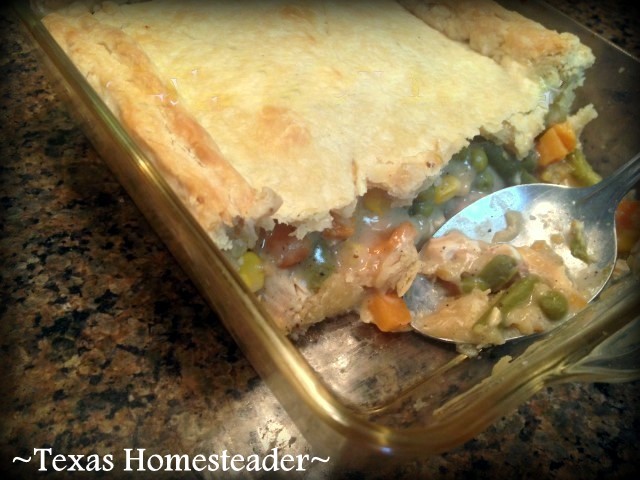 All in all it took about 40 minutes to brown to my liking.

When I brought it out from the oven the aroma was so enticing, there were plenty of ooohs and aaaaahhhhs from RancherMan to go around.

I served it up for supper & he raved about the meal. So I thought I’d share the easy recipe with you today: 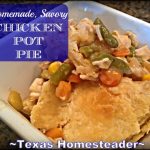 A quick and delicious meal. Just use a pre-made pie crust, add chopped leftover chicken, add cream of chicken soup & top with the other pie crust.  A delicious comfort-food meal that comes together quickly. #TexasHomesteader