There’s not a much better comfort food than homemade Chicken & Dumplings. This is a favored recipe in my Homestead kitchen and the ultimate comfort food. Check it out! 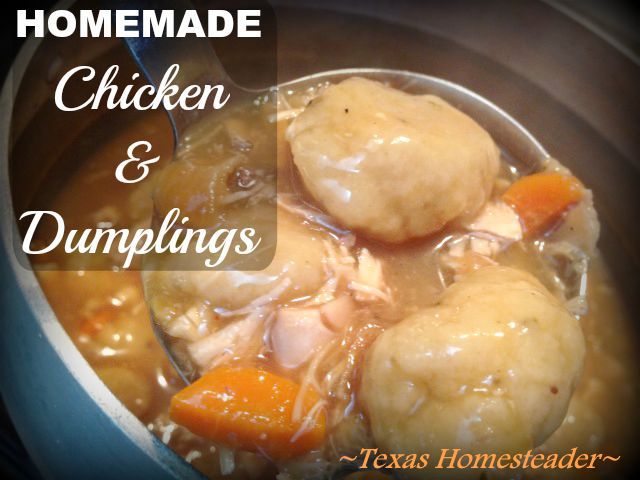 I always have homemade broth on hand. So when I have leftover chicken it’s my kinda quick & easy southern comfort to whip up chicken & dumplings from scratch.

It’s a very versatile recipe and you can add whatever seasonings float your boat.

I’ll share the basic recipe I use, although I’ll admit I throw in whatever sounds good at the time or whatever I have waiting to be used.

All came out deliciously.

Although I’ll be canning my chicken broth this winter so I can store it in the pantry, when I make broth during the heat & humidity of a typical Texas summer I freeze it instead. 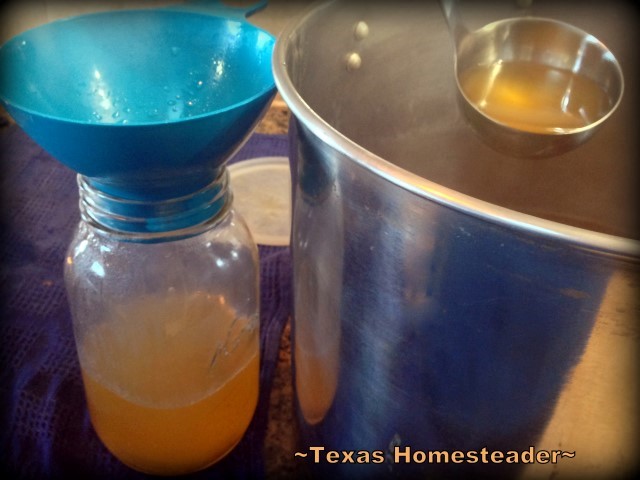 I just can’t stand the thought of adding even more heat & humidity to the house by canning when other options such as freezing broth exist!

So if I’m using frozen broth, the night before I simply take a container of chicken broth from the freezer and place it in the fridge to thaw overnight.

The following day when I’m ready to start making my chicken & dumplings I’ll pour the broth into a deep pot & put it on the stove to simmer.

Oftentimes I’m making use of dehydrated vegetables to use in my chicken & dumplings. If so I toss in a handful of whatever dehydrated veggies I want now so they can rehydrate right there in the broth. Typical additions for me are chopped onion and celery and also chopped carrot.

If you don’t have dehydrated veggies, adding the fresh counterparts into your broth at this point would be appropriate.

I also chop about 2 cups of leftover cooked chicken and set it aside. I want to have it ready to drop into the simmering broth at the end.

You can use more or less chicken based on how much leftover chicken you have available or how meaty you want your chicken-n-dumplings to be.

See what I mean? Flexible!

While the broth is simmering and the veggies are rehydrating/cooking I whip up my homemade dumplings.

It’s quick using only a bit of flour, some baking powder, milk, shortening (or bacon grease) and seasonings.

My typical seasoning is simply salt, coarsely-cracked pepper and thyme.

This makes a pretty stiff dough. 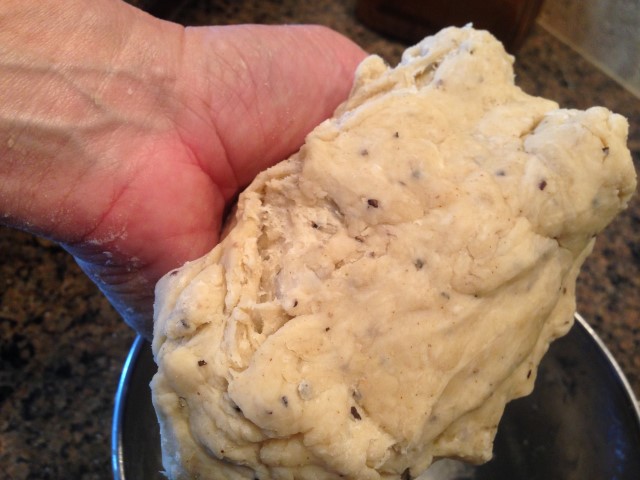 Now that my broth is simmering nicely I pinch off about a teaspoon of my dumpling dough. I roll it into a small ball & press it gently between my palms to flatten it somewhat before dropping it into my broth.

This procedure is continued until all my dumplings are simmering in the broth. I give one very gentle stir and put the lid on the pot to allow it to simmer for 12-15 minutes. (depending upon the size & thickness of your dumplings).

It’s important not to stir the dumplings too much when they are in dough form as they will dissolve into your broth.

How To Thicken Chicken & Dumplings Broth

If that’s the case I’ll take a jar and add about 1/4 cup of flour with enough cool water or broth to make a thin paste, stirring until the flour is completely incorporated and no lumps remain.

Then I pour this thickening into my simmering broth, stirring very slowly & gently. My broth always thickens up beautifully.

Now is the time to drop in my chopped chicken. One more stir and I leave it on the stove just enough for the chicken to get heated through.

This chicken & dumplings recipe fed RancherMan & me a hearty supper. Plus I still had enough leftovers for a couple of lunches for each of us.

Did you make these Chicken & Dumplings? Please rate the recipe in your comment below! 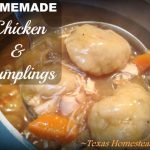