A family member had a bumper crop of various peppers last year. So she seeded several various kinds of peppers & plunked ’em all in the freezer to share with me. But now I’m trying to put them all to good use – especially those poblanos we love.

RancherMan & I both enjoy Tex-Mex food and we absolutely love chili rellanos. But (and I can’t emphasize this enough, y’all) I’m a lazy cook! So I thought it would be great if I could use my silicone muffin pan to make a quick-cooking chile relleno casserole into single-serve portions.

I gave it a try & RancherMan absolutely raved at this lazy-cook’s version of chili relleno. I must admit, it was absolutely delicious. And without the time spent roasting the peppers and other steps of traditional chili relleno.  Come see what I did. 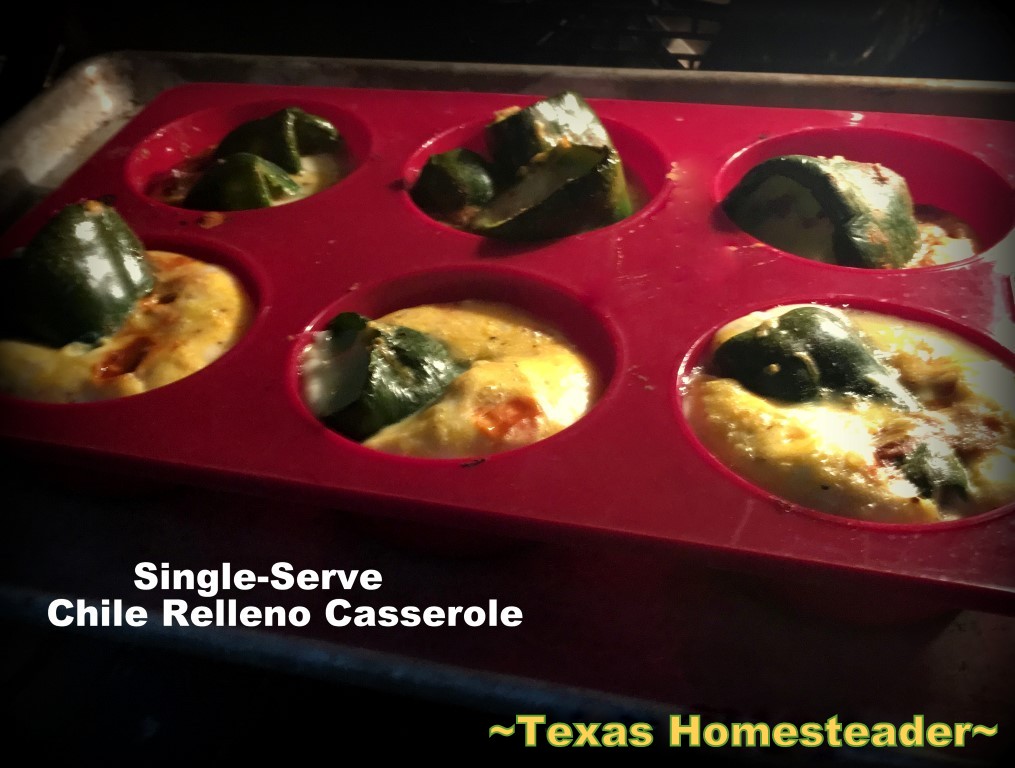 I brought out my frozen poblano peppers & let them start thawing while I was assembling my other casserole ingredients. I cubed about 6 ounces of pepper-jack cheese & shredded about a cup of the cheese too. Then I mixed up the egg mixture and set it aside.  In just minutes everything was ready to begin assembling my casserole. A lazy-cook’s dream!

I brought out my silicone muffin pan and placed it on a cookie tray. This helps support the muffin pan while putting it into and taking it out of the oven. Then I dropped about a tablespoon of enchilada sauce into each cup. There was some enchilada sauce leftover from that can of sauce. But that worked out perfectly for me to add with a couple of tablespoons of chunky picante sauce to season rice into a mexican-rice side dish.  #usewhatchagot!

Now let’s assemble the casserole! I placed a still-semi-frozen poblano pepper into each muffin cup. If the poblanos were small, I added two peppers instead. Then to give me the melty-cheesy filling we love I stuffed each pepper with cubes of pepper-jack cheese.

Finally I poured the egg mixture over each pepper, and even into the pepper when I could. I was careful to fill each muffin cup no more than 2/3 of the way because those eggs will really puff up in the oven!

I baked my casserole in a 350-degree oven until the egg was set and the tops were lightly brown – about 45 minutes or so.

As I mentioned, I made some rice & seasoned it with a few tablespoons of chunky picante sauce & the leftover enchilada sauce. The Chile relleno was served with sides of refried beans and the Mexican rice. 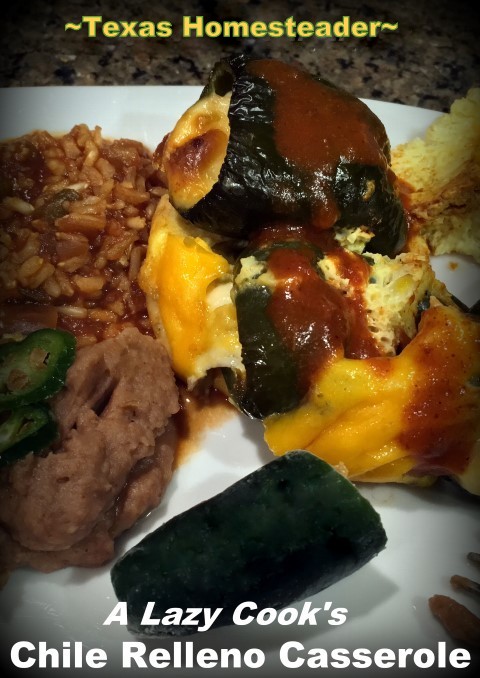 It was delicious & as I mentioned, RancherMan absolutely RAVED about this dish. And these little muffin cups would have frozen beautifully as part of my ‘Cook-Once, Eat-Twice’ method of cooking. But let me tell ya they never got that far!  RancherMan insisted that we have them for supper the next night as well as lunch the day after. Then they were GONE! They never even got the chance to hit the freezer.

Now when your man raves this much, I’d consider this Lazy-Cook’s Chili Relleno Casserole meal a screaming success, y’all. You can bet your boots I’ll be planting plenty of poblano peppers in the garden this year…

Note: The egg mixture will expand while in the oven, and partially collapse when you bring the dish out of the oven. This is normal.