The other night I made a pork roast in my slow cooker. Since I often use the Cook-Once Eat Twice method I was cooking with planned leftovers in mind.

My plan was to enjoy roast & potatoes for supper that night, then Carnitas Tacos with the leftovers. So while I was cooking my roast I cooked up the taco veggies at the same time. I heaped in plenty of chunky onions and red, yellow & green bell peppers.

When the time came the next day to turn leftover roast into carnitas tacos I thought about the taco shells.

DANG I hate to buy those! They’re always so hard & brittle. Plus several are often already broken in the package!

Oh, and you have to buy 12 at a time, much more than RancherMan & I need. Plus more times than not they just taste stale to me. How I hate wasting money buying them.

Then I remembered something I read years ago about how to easily make taco shells as you need them. Now’s a perfect time to give ‘er a try!

First I bought a package of corn tortillas. (UPDATE: I now make my own Corn Tortillas in minutes and for pennies!) I brought out the corn tortillas that I wanted to make into taco shells.

(now’s the complicated part, y’all)  I just laid each tortilla across a wire on the rack in my oven and closed the oven door. I didn’t spray them with anything, or butter or oil or season them.  Nothing!

I suppose you could lay each tortilla across two racks to try to make a wider taco shell. These will stand on their own while you fill them.

Although I can see the convenience in that, to me they’re also harder to eat when the bottom is squared. We much prefer our taco shells to be narrow enough to bite into easily.

So only one wire was beneath each taco shell I was baking. 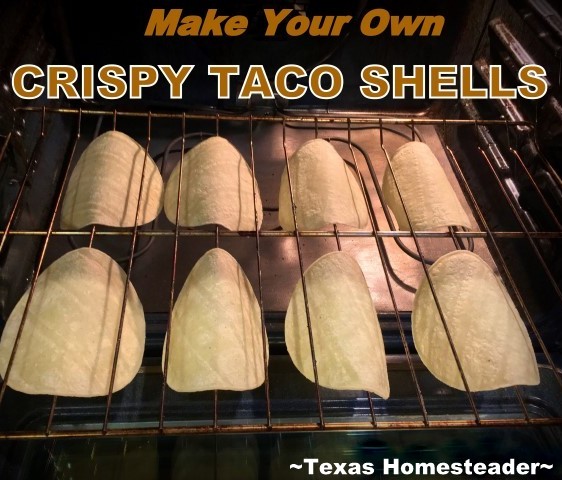 Then I turned the oven on to 350 degrees and set the timer for 5 minutes. The corn tortillas enjoyed that slow warming-up time in the oven.

When my timer went off I turned the oven off and sat the timer again for 5 minutes. My tortillas continued to crisp as the oven was slowly cooling.

When the timer went off this second time I pulled my taco shells from the oven. They were narrow enough for easy eating & lightly crisp.

Don’t expect them to be hard and shatter-crunchy like the commercial shells y’all.
These will be lightly crisp and they’ll hold together when filling instead of snapping in two. We love ’em.

And where a raw corn tortilla would have torn, these crisped ones flexed enough without breaking. They held together beautifully as we stuffed them full of shredded pork. 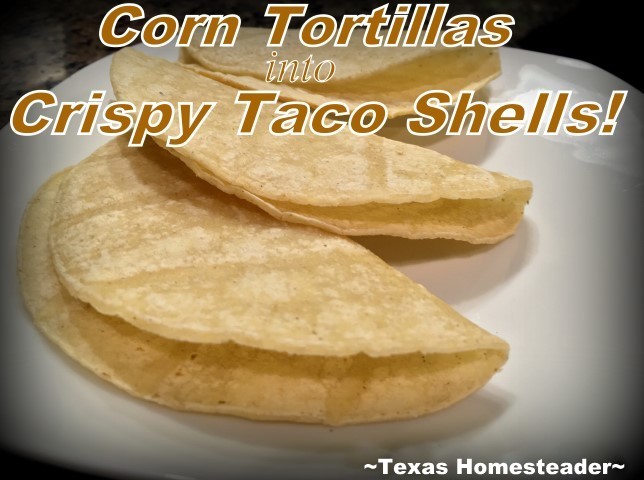 Something I’ll caution about:

My first batch of taco shells baked up beautifully. But when we wanted leftovers for lunch the next day the tortillas were one day older. So some of the tortillas cracked at the wire. One tortilla cracked all the way through and fell from the wire to the oven floor below.

I was able to open the oven door & fetch that tortilla with my tongs before it made a burnt mess. But be sure to stay by your oven with a pair of heat-proof tongs at the ready in case your tortillas do this! I’ve pre-heated day-old tortillas in the microwave for a few seconds which seemed to help them bend without breaking somewhat, but keep an eye on ’em, y’all!

Now that we’ve enjoyed our carnitas tacos, what will I do with the leftover corn tortillas in the package?

Oh those won’t be wasted either. I’ll oil & season them to make them into baked tortilla chips! 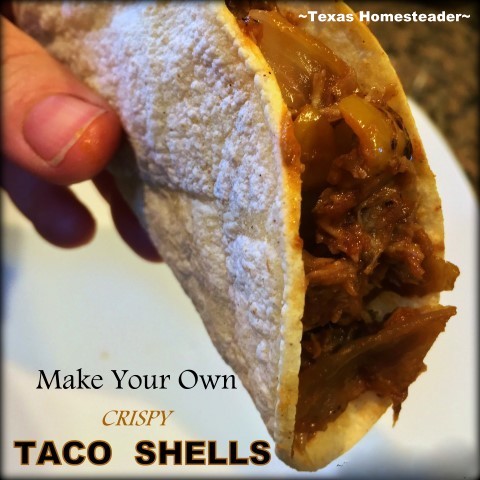