Instant Pot Yogurt – so easy! I’m sharing step-by-step instructions with photos to make it easy to make your own creamy yogurt.

And (as there always is) I share a shortcut I use in the timing of making it too! 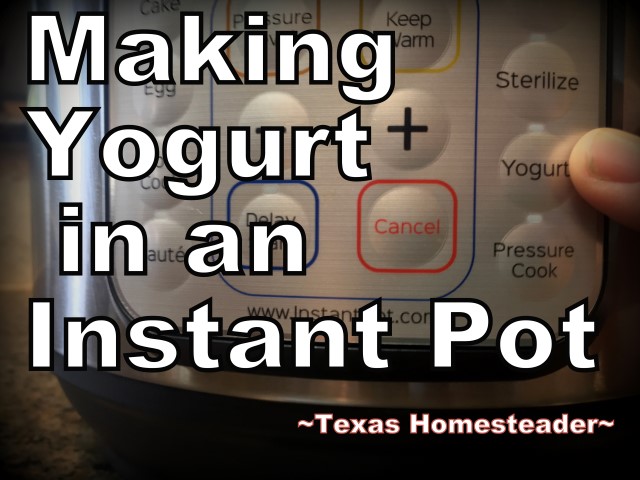 Homemade Yogurt Efforts In The Past

I’ve made yogurt for years, neigh decades. It was actually the very first self-sufficient step I ever took.

Back then looking at those non-recyclable (in my area) plastic yogurt tubs that I was forced to throw away, I just figured there had to be a better way.

I started making 1/2 gallon of Stove-Top Homemade Yogurt every week or so since then. I’ve never looked back! 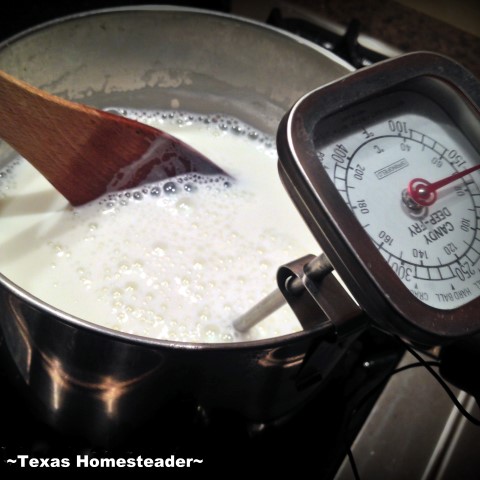 But now there’s this Instant Pot craze. So I finally took the plunge. And there’s a yogurt setting on mine too. Hummmm…

Now for you folks who want to see the abbreviated instructions for Instant Pot Yogurt just to decide if you’re interested in pursuing making Instant Pot yogurt, here ya go:

Yep, it’s really just that easy. And those instructions are the same whether you’re using your electric pressure cooker’s ‘Yogurt‘ button or making it in a pan on your stove top. Easy/Peasy! 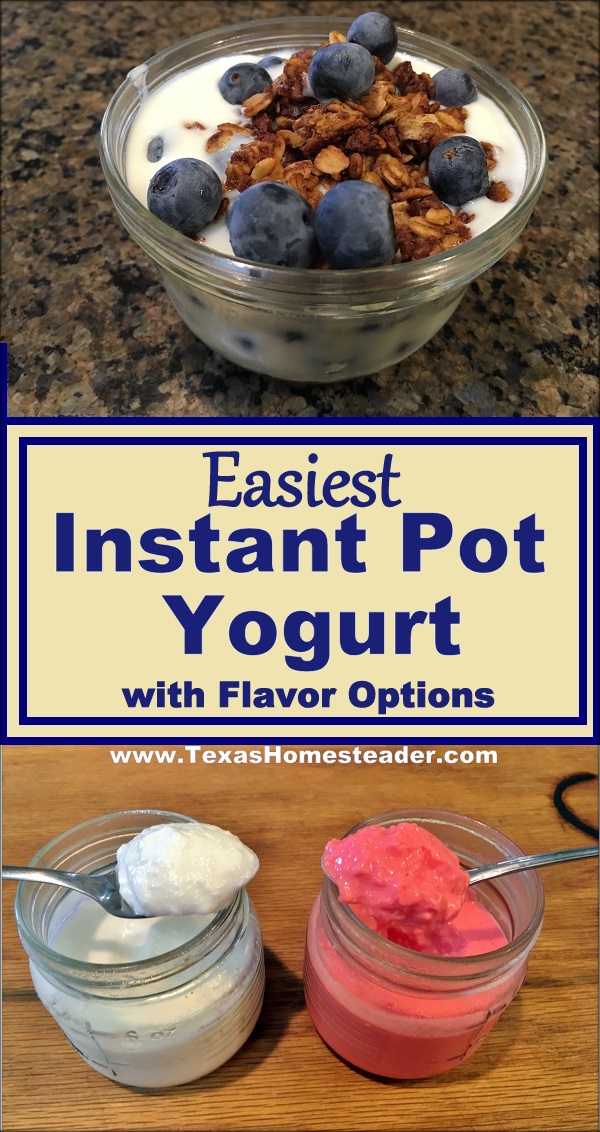 After researching I decided on the actual *Instant Pot Brand electric pressure cooker. It got the best reviews for customer satisfaction and longevity.

I first experimented with the for a while by borrowing my sister’s larger 8-quart Instant Pot. But I decided it was just too much for our household of two. And storage space was an issue too.

So we purchased the *6-Quart Instant Pot Duo. Partially because it had the yogurt feature included. 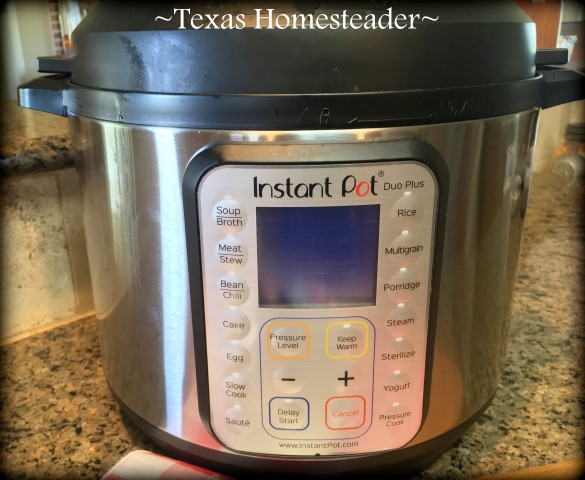 But I’ve already been able to make many things in this IP. So far I’ve been very pleased with it!

What Kind of Milk For Instant Pot Yogurt?

2% Milk – still a good texture – not quite as thick as whole milk but lower fat.

How To Use The Yogurt Setting On Instant Pot

When the cold milk was poured into the pot I placed the lid on top & secured it.

I’ve read that it doesn’t matter if your vent is on sealing or venting, so I left it on sealing. I figured it’s probably less heat & humidity being poured into my kitchen that way if nothing else.

Then I pressed the “Yogurt’ button until it displayed ‘BOIL’.

Now all that’s left to do is walk away and wait for it to do its thaaaang. It took about 25 minutes for the milk to come to the correct temperature. I was alerted by a tone from the IP.

To assure my milk had actually attained the correct temperature I checked it with my *Instant Read Thermometer. This is the same thermometer I use when I’m making stove-top yogurt too. A quick check tells me I’m good to go.

How Cool Should Yogurt Be Before Adding Starter?

But we can’t add the starter yet! The milk is hot & will kill the starter, keeping it from turning your warmed milk into yogurt.

First we have to cool the milk down. Some say to around 110 degrees Fahrenheit, but I strive to cool it down to between 100 – 105. 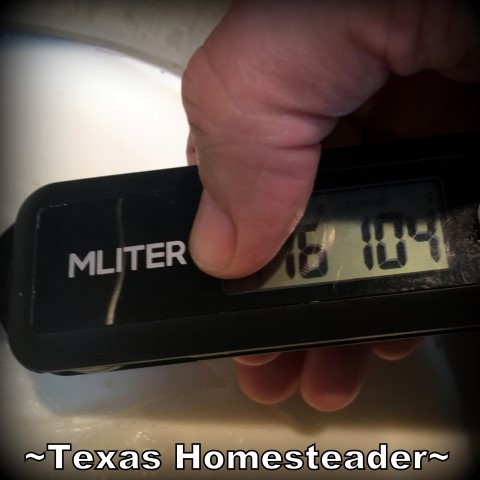 If you remove your Instant Pot container & place it on the counter, this cooling-down step takes about an hour. But you can speed it up by setting the container into a large bowl of ice water.

During the cooling down period a skin has probably formed over your milk. Some people stir it back in but I find it never fully disappears. So I like to remove it at this time.

It’s easy, I just slide a spoon along the skin to gather it up & remove it. 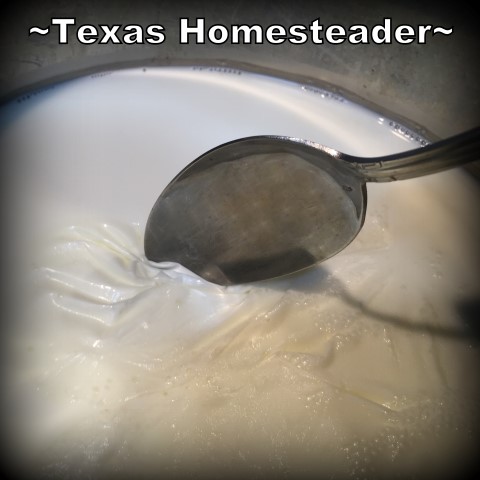 Now that your milk is a safe temperature it’s time to add your starter, which is simply yogurt with live active cultures. I’ll stir in around 1/4 cup until it’s fully incorporated.

Once you make your own yogurt you can set some back to use as starter next time. But if this is your first time you’ll need to purchase yogurt with active live cultures.

Some say your yogurt will not make correctly if you use a sweetened or flavored yogurt even if it has active cultures.

But due to lack of availability, I’ve improvised in the past by using Dannon with active cultures in vanilla flavor for my starter. The yogurt turned out fine, albeit slightly vanilla flavored. It actually added a nice subtle hint of vanilla.

How To Incubate Homemade Yogurt

Now all that’s left is to incubate the yogurt. So I press the ‘Yogurt‘ button again until it shows 08:00 (which is 8 hrs I’m after).

Most folks like 8 hours incubation for their yogurt. But those who like it more tangy might opt for 10 hours, which you can do by pressing the ‘+’ button until it shows 10:00.

Now your hands-on part is over until your yogurt is finished. Oh boy, those cultures will get right to work for you.

Once its incubation time is done the IP will beep signaling it’s done.

SHORTCUT: Make Yogurt While You Sleep

I now time my homemade yogurt procedure to look like this:

The next morning I place the finished yogurt into reusable canning jars. Then into the fridge they go.

Yogurt making has never really been this easy before! LOL

What Is The Texture Of Homemade Yogurt?

Homemade yogurt isn’t quite as hard & rubbery as you may be accustomed to with commercial yogurts. The commercial guys add thickeners & additives to their yogurt.

But Homemade yogurt is more silky. It comes out of the Instant Pot thin enough to pour into jars. But then it thickens as it cools.

How To Make Single-Serve Homemade Yogurt

Some people jar their yogurt in big quart jars for their fridge. But my preference is single-serve convenience. So I’ll spoon it into 1/2-pint glass jelly canning jars and store them in the fridge.

I always have an ample supply single-piece screw-top lids since I’ve learned where to Find FREE Canning Jar Storage Lids. 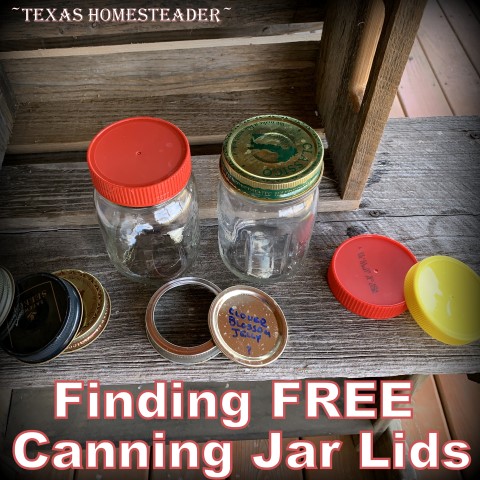 It’s grab-n-go convenient. Oh, and no trash! Those glass jars & reusable lids can be washed & reused for years.

How To Use Homemade Yogurt

I make my homemade Instant Pot yogurt unsweetened so that if need be I can use it as an ingredient:

In my Buttermilk Biscuits that RancherMan loves.

But if I want yogurt for breakfast I’ll sweeten it with some Harvested Honey from our apiary and maybe a handful of granola & fresh blueberries. 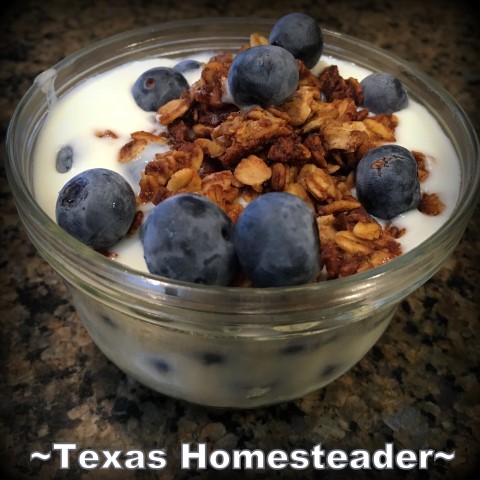 RancherMan prefers it much sweeter than I do. He’ll typically stir in some homemade Pear Preserves or maybe Wild-Plum Jelly.

He always tops his yogurt with a handful of Pumpkin Granola that I adjust specially for him by not adding dried fruit. (because dried fruit in cold yogurt gets kinda tough & chewy)

And how about this nifty trick? A dear Homesteader Facebook follower even suggested that she jars up about half of the unsweetened yogurt for her hubs and then stirs a box of sugar-free jello into the remainder for the grandkids before jarring up their sweetened version.

OMGosh RancherMan *totally* loves it this way! But, you know, then again – RancherMan’s a big kid himself. 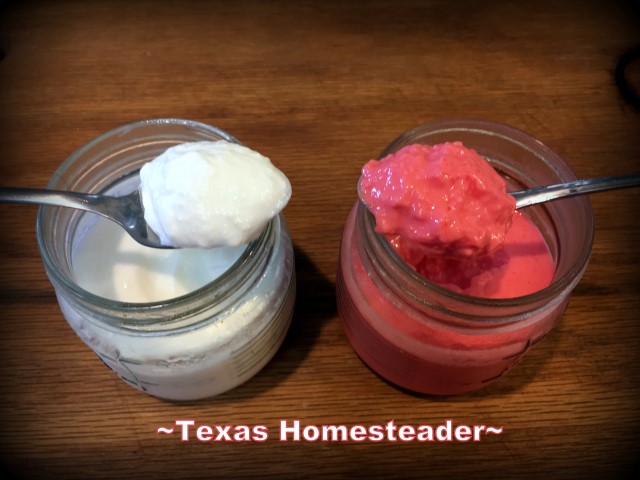 So go ahead & take the leap. However you like it, be proud of yourself. You’ve just taken a step to eco-friendly (and BUDGET friendly) self sufficiency.

Did you make this yogurt? Please rate the recipe in your comment below! 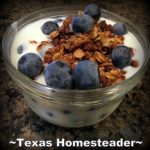 Creamy homemade yogurt made easy in a pressure cooker. Commercial yogurt often has added gelatin & thickeners (often along with some chemical nasties I'm afraid.) The taste of the homemade yogurt can't be beat, is significantly cheaper and healthier for you. And no more plastic yogurt containers go to the landfill! #TexasHomesteader

Yogurt will firm a little more upon cooling, although it's a more silky yogurt than the ones in the store since they add gelatin & thickeners to the commercial stuff