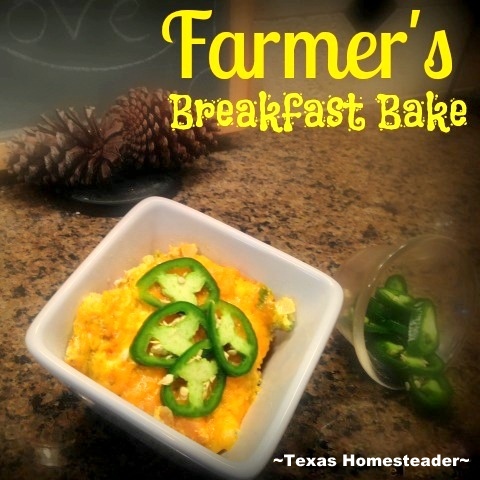 We have a few free-range hens and they’re providing eggs for us very well, #thankyouverymuch. I’ve been coming up with ways to use those delicious nutritious eggs.

One of our favorite ways to use these eggs is to have Breakfast for Supper. So I decided to make a Farmer’s Breakfast Bake which includes, eggs, smoked ham, sharp cheddar cheese and hash browns.

We’ve been incorporating fresh wholesome eggs into our diet more often since I discovered the Benefit of Free-Range Eggs. So why not make a breakfast casserole with them?

I used an 8″ round-sized casserole dish that was about 4″ deep. I wanted to make sure there was plenty of this breakfast casserole for the two of us to not only eat, but also have enough leftover for breakfast the next day or to freeze for later.

I’m a big advocate of Cook-Once, Eat-Twice cooking. It streamlines my time in the kitchen. A good thing especially now during the busy season here on the Homestead!

I wanted a quiche-like crust but didn’t want to use traditional pie crust. So I decided that the ‘crust’ would be hash browns. YUM!

For my hash brown crust I used some of my dehydrated shredded potatoes, but of course you could use store-bought hash browns, Just make sure they’re thawed and drained.

For my dehydrated shredded potatoes I rehydrated them, drained & crumbled enough to cover the bottom of the casserole dish. This will make my casserole crust.

I placed my dish with the crumbled hash browns into the oven set to broil until the hash browns were golden brown and crispy – about 5 minutes.

While the hash brown crust was crisping in the oven I mixed up some fresh eggs with some milk and added chopped onions & bell pepper and seasoned with salt & pepper.

When the hash browns were crisp I pulled the dish out of the oven and chopped up some smoked ham and sprinkled it on top of the crisp hash brown crust.

Finally I poured the egg mixture on top and placed the dish back into the oven, set to 350 degrees F. until the middle was cooked and the surface was a light golden brown color – about 30 minutes.

When the casserole was cooked I brought the dish out and sprinkled the top of the casserole with a little sharp cheddar cheese and allowed the dish to sit out for about 5 minutes. That allows the egg to finish setting as well as melt the cheese before serving.

I used just a sprinkling of cheese since RancherMan’s not a big cheese fan, but you can pile it on if your family loves it!

I garnished ours with sliced jalapenos because, well, I love everything jalapeno. But this breakfast casserole would also be good with a dollop of sour cream or a hefty spoonful of Pico de Gallo too!

So how did this Farmer’s Breakfast Bake Casserole go over at our Homestead?

I loved the hash-brown crust and the fluffy eggs cooked with the onion/bell pepper. Plus the diced smoked ham gave the whole thing a very hearty feel.  RancherMan said it was delicious – Success! 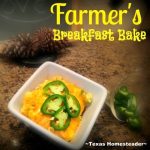