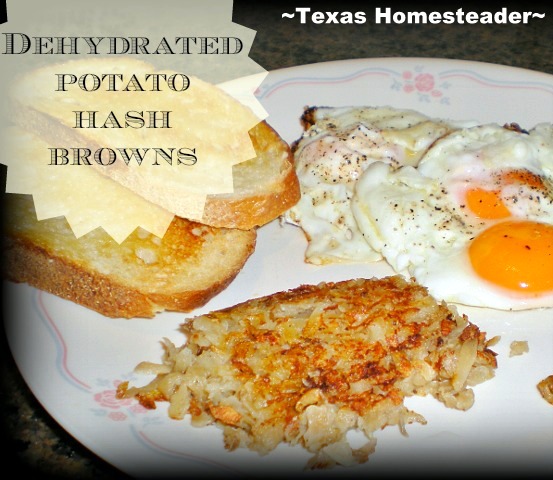 I dehydrated several pounds of potatoes and found that when they were fully dehydrated they take up very little space. They were able to be stored in small repurposed jars.

And of course since they’re dehydrated they’re going to last much longer than a bag of potatoes would. I keep them all in a small labeled jar in my pantry. 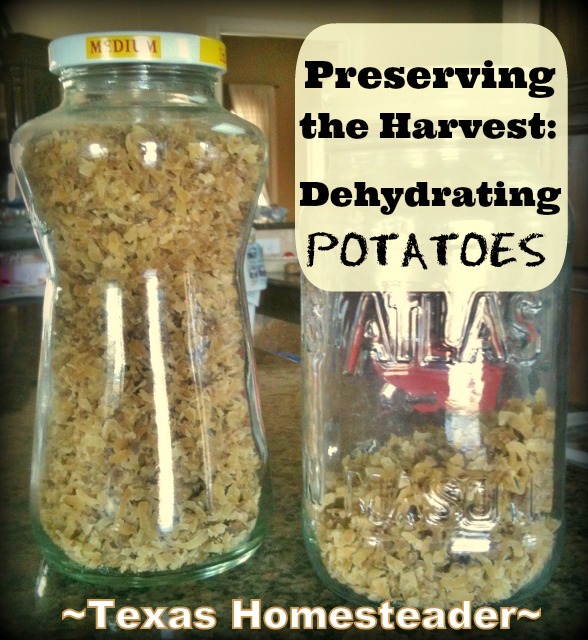 So dehydrating is a great way to keep your fresh produce from going to waste before it can be eaten. You know how much I hate food waste, y’all!

But today I decided to enjoy some of those dehydrated shredded potatoes with breakfast. I want to make hash browns to go with breakfast for RancherMan & me!

We have plenty of eggs since our pastured flock is still laying great right now, lots of fresh homemade bread for toast, and even some delicious pear preserves I canned recently.  Adding homemade hash browns sure sounds like a great breakfast to me!

I’ve gotta say those hash browns turned out delicious and they were oh so easy. Here’s what I did:

Inside Firm, Not Soggy – You don’t want any extra moisture remaining inside your rehydrated potatoes since it could result in your hash browns being soggy in the middle.

You see, extra moisture just adds steam as the hash browns cook, which could result in a soggy middle. I love hash browns with a crisp crust outside and a creamy potato inside, don’t you?

So when the rehydrated shredded potatoes are ready I’ll make sure to drain them thoroughly. Even pressing the potatoes gently in the strainer to make sure all the water is drained away.

Then I often spread them out to let them air dry a bit as I prepare the rest of breakfast, such as cooking the eggs & toasting the bread

Crispy Crust –  I really want hash browns with that signature crispy crust. But if I put my shredded potatoes in oil that’s not already hot, they will sit there and soak up the grease before it even starts to crisp. Surely not the texture I’m after!

So be sure your oil is already hot when you add the shredded potatoes to keep them from soaking up excess grease.

And I don’t try to flip my hash brown until a good, crispy crust has formed on the bottom. Not only does that assure the crispy texture I love, but it makes it easier to flip the hash brown without it falling apart.

By now the eggs are fried so I removed them from the cast-iron skillet and poured just a touch more oil into the still-hot pan. I allow the oil to get good and hot before I proceed. (see crispy crust note above)

Then I dropped my rehydrated shredded potatoes in the skillet, pressing them down lightly with the spatula to flatten them.

I divided the hash browns into quarters to make it easier to turn after each side was cooked crispy. 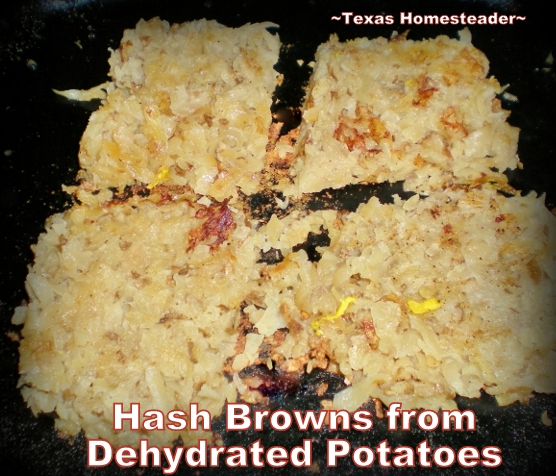 Now here’s the drudgery-work-in-the-kitchen part – after browning each side for about 3-4 minutes I scooped up each section and placed them on our plates. How easy is that??!!

But this was my first time to actually make rehydrated potatoes into hash browns, one of my favorite breakfast accompaniments.

I’ve got plenty of dehydrated potatoes in the pantry so I’ll be doing this a lot! I really love to make things for myself instead of relying on something from the freezer section of the grocery store.

Plus these hash browns are almost waste free (except for the bag the raw potatoes came in).  And they store for a long time in my pantry using no additional energy to keep them fresh. Love it!

15 thoughts on “How To Make Hash Browns With Dehydrated Potatoes”