RancherMan loves bread. A lot. And y’all know I like to try to provide for my family whenever possible.

I’ve read the recipes and they all talked about how easy it is, but bread had always been a challenge for me no matter how hard I try. And I’d tried for years.

I always end up with a short, squatty, heavy-textured loaf. RancherMan has never complained but I longed to make him REAL sandwich bread. You know the kind: soft, fluffy and aromatic.

I’m … I mean PERSISTENT so I kept trying over the years and I’m happy to say at last it appears the stars and the moon have finally aligned.

Learn From My Bread-Making Failures

My dough this time was a little softer, and also still somewhat sticky. I know that using my * KitchenAid Mixer this time was a major reason my baking session resulted in success.

Since I’m not kneading with my hands I’m not quite so apt to start adding flour to keep from having dough-gummed hands reminiscent of a toddler making a mud pie.

You see, by scooping the flour up with a measuring cup the flour will be compacted, resulting in too much flour being measured. You want your flour to be measured when it’s fluffy.

Hummm…  No wonder my loaves were too dense and squatty before…

So with renewed excitement I’m ready to try again. I love the ease of using my * KitchenAid so I looked up the recipe that came with my mixer.

I’ve made this recipe before but not with the results I got this time now that I’m using the lessons learned above. But y’all already KNOW I can’t stand to follow a recipe exactly. So I tweaked the recipe to suit our tastes:

Big Improvements: I replaced 1/3 of the butter in the recipe with bacon grease for extra flavor.

I’m not sorry & I’m here to tell ya that you should totally make the substitution too!

I also typically use a blend of whole wheat & all-purpose flour.

(I’ve also made this bread recipe into an Oatmeal Version by substituting some of the whole-wheat flour with oat flour I made by whirring some whole oats in my *electric Coffee Grinder to make oat flour with delicious results!)

Measuring the flour takes lots of time when there’s several cups of flour for making bread.  Then one of my dear FB friends told me she measures the flour once and then WEIGHS it instead. (gasp)  Why, that’s BRILLIANT!

So I totally do that now too. I have a kitchen scale that includes the tare function to zero out the weight of the container sitting on it. This is now one of my most valuable tools in bread-making shortcuts! 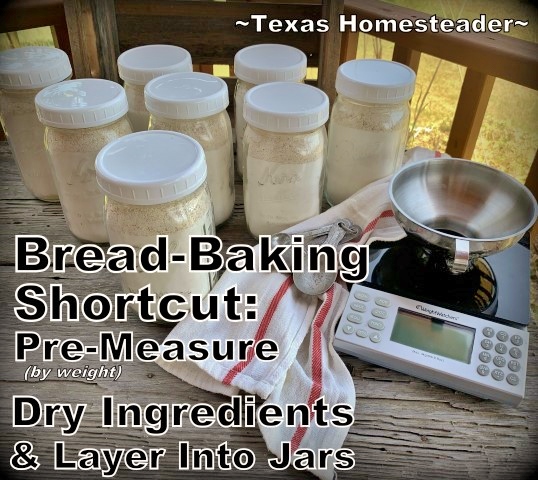 Spooning all that flour into the cup & then scraping it off & dumping it in over & over takes way more time than just taring my empty coffee can and dumping flour in until it weighs what I’ve noted on my recipe.

So I made notes on my recipe card of the weights to go along with the measurements. Weighing the flour instead of measuring is SO much faster!

Now I’ve heard that the weight of your flour could vary based on type, and even the humidity in your area. So although this is probably only an estimate, here’s a link from King Arthur Flour that gives estimated weights of a cup of different flours.

I measured the milk and heated it in the microwave for about 30 seconds or so until it was very warm. Then I added the butter, bacon grease, sugar and salt and stirred the whole shebangie until the butter was melted. I sat it aside so it could cool to lukewarm.

In a large measuring cup I measured out & warmed the water. Then I stirred in the yeast until it was dissolved.  I poured the water/yeast mixture into my KitchenAid bowl and added the lukewarm milk mixture.  Then I measured out by weight 4.5 cups of flour and added it to the bowl, attached the dough hook and got busy mixing the ingredients on speed 2 for about a minute to get it all incorporated.

After a minute I added another 1/2 cup of flour and continued mixing on speed 2 for about two minutes.  (I could have added up to another cup of flour in half-cup increments but I don’t want to add too much. I’m looking for the dough to cling to the hook and clean the sides of the bowl) After I’ve added & mixed enough flour I continue mixing on speed 2 for two more minutes so the dough is smooth and elastic.

Now I pull out a stainless steel bowl and grease it well with shortening. I plop my dough into the greased bowl, then grease my hands and pat the whole thing down.

Most recipes tell you to turn the dough ball to coat all sides of the dough but this was an easier way for me. Then I greased a piece of wax paper and placed it across the top of the bowl, greased side down.

To warm the oven I turn it on preheat for about 30-45 seconds, then turn it off again. This makes a warm draft-free environment for my bread to rise.

With the oven turned off I slide my bowl containing my bread dough into the oven and shut the door. Finally I set the timer for 1 hour and let the dough do its magic.

After an hour the bread has risen beautifully. I lightly flour my counter top and plop the whole thing on the counter.

The dough is sprinkled with a little flour to keep it from sticking to my hands and I begin to knead the dough to break down all the bubbles it contains.

After kneading for a couple of minutes I cut the dough in half, sprinkle a little more flour on one half of the dough and take my rolling pin and roll the dough into a rectangle. 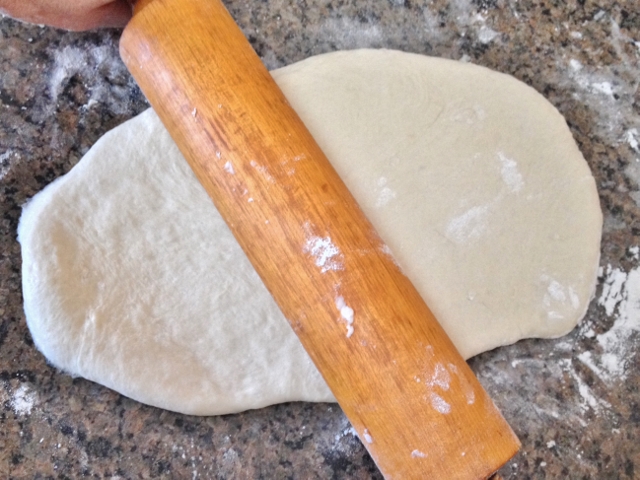 Then I carefully roll the rectangle dough into a log, pinching the ends to seal them. I place the dough log into a greased glass bread pan, turning to coat the top.

Then I repeat the rolling/pinching/greasing procedure for the second loaf.

When both loaf pans are ready I place them back in my warm oven, cover them with the same wax paper as before and allow the dough to rise a second time.

Although the recipe calls for the second rise to be about an hour, this time frame often causes my dough to over-rise. That made large air pockets created that collapsed during baking & resulted in a misshapen loaf.

So now I only allowed the second rise for about 50 minutes and it works beautifully. You want your dough to rise to approximately double in size.

Ready To Bake The Bread!

When the bread is ready to bake I carefully remove the wax paper, turn the oven to 375 degrees (because I’m using glass pans) and set my timer to 30 minutes.

About 5 minutes before the baking time ends I rub the tops of my loaves with a little butter to soften the crust, then allow them to finish baking.

When the timer goes off I remove the bread from the oven & place a clean kitchen towel over the bread while still in the pans for 5 minutes – I feel this further softens my crust.

Then I remove my loaves from the pans and place them on a baker’s rack and allow them to cool.  I re-cover the loaves as they’re cooling with a tea towel, again to keep the crust soft. 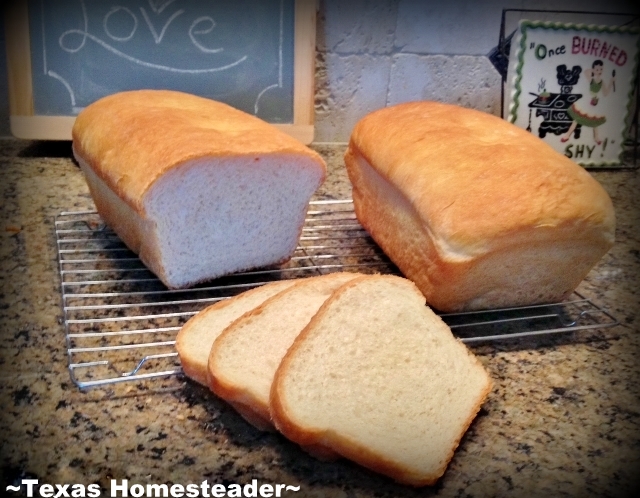 It looks great, it smells great – but how does it taste??  I sliced a big honkin’ piece and gave it to my RancherMan to sample.

He says I nailed it. Finally, SUCCESS! I’m practicing my acceptance speech, “I’d like to thank my KitchenAid for making this possible…” LOL (No KitchenAid didn’t pay me a cent to say that nor to write this post, but today’s bread was certainly made possible by it.  I “heart” my KitchenAid!)

Since learning to make delicious sandwich bread I’ve branched out and come up with an Oatmeal Version too! 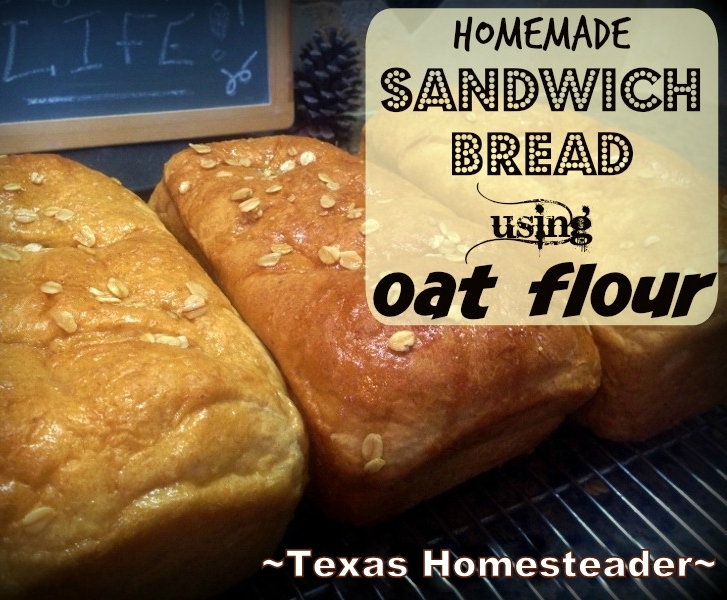 Oh, and since I bake bread so often, I’ve also created a series of Bread-Baking Shortcuts so I don’t have to start from scratch each & every time. Work smarter, not harder right??!!

So now that you’ve read the behind-the-scenes story, here’s the recipe: 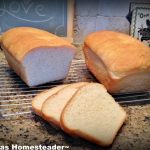 When bread is done, I like to cool the bread for the first 5 minutes while it's still in the pan, covered with kitchen towel before removing the bread from the pans & placing on wire racks & recovering with the kitchen towel to cool completely. Once bread is completely cooled you can slice it and store it for use. (or do as we do & cut a chunk while it's still hot, slather with butter & ENJOY! LOL)