We have a wild hog problem here in NE Texas. Bad. So bad in fact that there’s no official ‘season’ for hunting them because they’re such an invasive, destructive nuisance.

Their sheer numbers are astonishing. They come through like a cloud, leaving nothing but tilled ground & deep holes behind them.

So terrible that the game warden says you can hunt them at any time day or night, in any season. 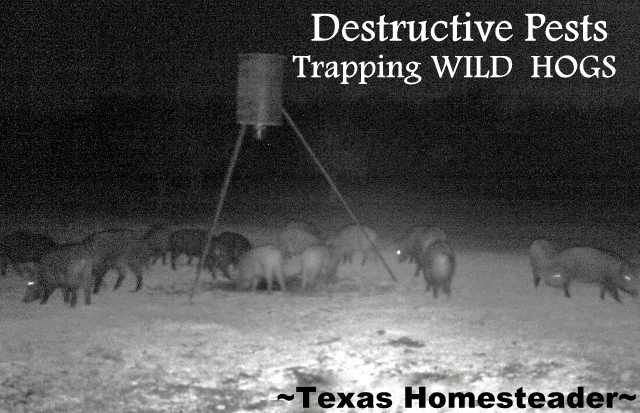 These feral hogs are descendants of domestic pigs that escaped and reproduced with lightening-fast efficiency.

They’re an expensive problem, causing much trouble with their deep rooting and sheer numbers. And they can easily descend upon a pasture & decimate it overnight.

When grass grows up in those wallows & I’m mowing, it’s often hard to see them from my seat on the tractor. So there have been many times in the summertime that I don’t see a hog wallow in time.

The jolt of my tractor almost throws me out of the seat! Let me tell ya, 8 hours of that kind of bumper-car ride is hard on the tractor. And the body too!

Everyone in our hometown knows that nighttime driving can be hazardous for sure due to these little beasts.

Good friends of ours totaled their car driving home from a high school football game one night when they hit a wild hog that was in the road.

And not too long ago a young man flipped his truck and was killed when a cloud of wild hogs appeared in the middle of the 2-lane blacktop after dark. There’s just so many of them!

Here’s a short 15-second video we took recently. RancherMan & I were enjoying our coffee when this group came running across our pasture by the house.

WHEW! There’s lots of damage potential there! Each one is a highly-efficient rototiller causing untold damage to both pastures and equipment.

Control Not As Easy As Most Folks Think

Now many who are not familiar with the problem of destructive wild hogs in our area over-simplify the problem. They shrug & say “Invite your friends to come shoot them and your problem will be solved!”. I hear it time & time again.

But here’s the thing: These wild hogs didn’t survive to these crazy numbers by being stupid. They will hit the pastures one night, completely destroy it and then disappear.

Or maybe one or two in this corner of a pasture one night, 50 or so in another corner the next night and then gone for a few weeks.

The photo below isn’t a disked field, it’s our pasture after a cloud of wild hogs came through and rooted the grass away. Complete, total decimation. Oftentimes they’ll dig up to 2-ft deep holes too! 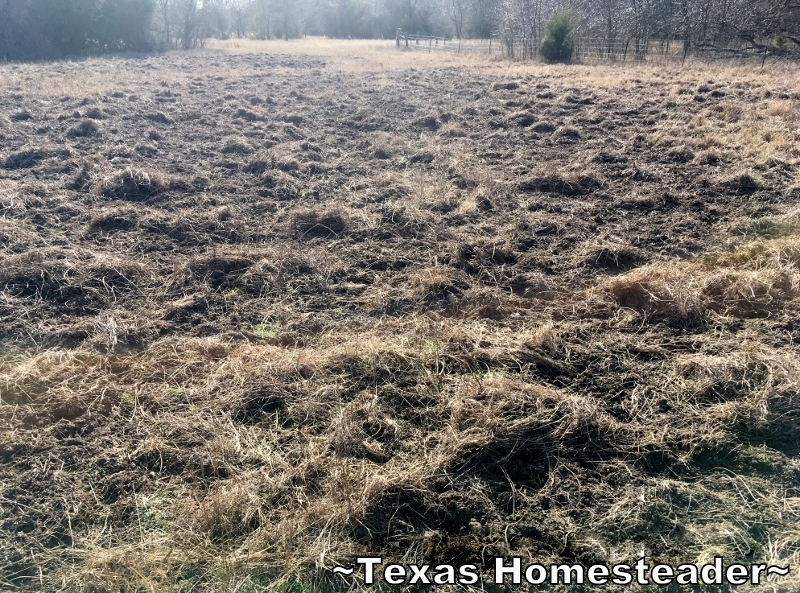 So hunting them is still a challenge. If by sheer luck you happen to be sitting in the right place that night at the same time they happen to be rolling through, you might get lucky.

More times than not they surface for a short time around 2 a.m., hit the game feeders for a few minutes and are gone leaving nothing but destruction in their wake.

So although RancherMan hunts them and is successful several times each season to put meat in our freezer, wild-hog control certainly isn’t really as simple as ‘call your buddies’.

Most of the time that meat in our freezer is from RancherMan’s successful hunting skills. But sometimes when their numbers are high he’ll set the traps in addition to his hunting.

One night recently the trap won! 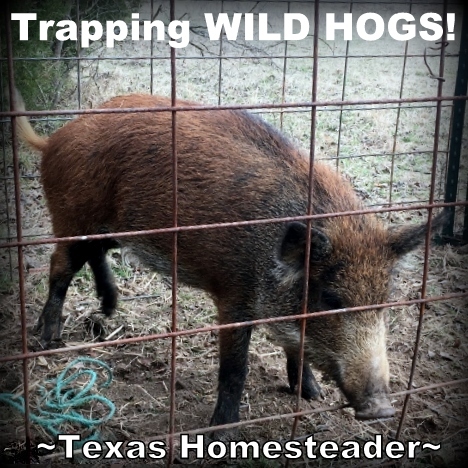 Birds find the corn right away and usually eat most of it.

And typically raccoons will find the baited trap before the hogs and spring the trap.

But we keep trying.  Wonder how we finally trapped this particular hog?

This time we tried something new: a liquid *Hog Wild ‘Pig Punch’. But we didn’t want to pour it on the ground because it would just soak in. We wanted the scent to stick around a little longer.

So we decided to dig a small hole beneath the trap’s trigger and bury all but about an inch of an empty tin can.

Then we mixed up the attractant & poured some into the can buried inside the trap. Afterward we broadcast corn in and around the trap and sat the trigger to the trap again.

We hoped a hog would be attracted to the scent, come nosing around & trip the trap door. 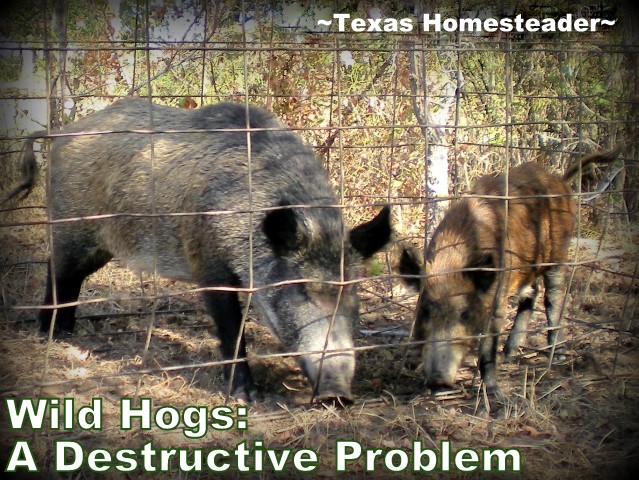 Sometimes we catch a single hog but we’ve trapped up to 4 at one time on occasion.

We typically harvest the hogs in the morning and within a short time there are pork roasts in large slow cookers or my Instant Pot. 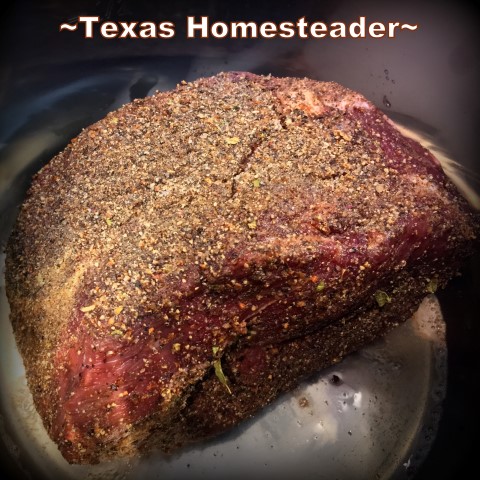 If the hog is larger we’ll often take it to the processor and have all those cuts we love – pork chops, ground pork and more

And with their expertise we’re able to put even more of the meat in the freezer.

I love when we get lots of ground pork and we request both chili cut as well as regular ground. There’s so much I can do with ground meat.

Especially the regular ground. I use a simple Homemade Breakfast Sausage Seasoning that I mix into ground pork. Then I use that breakfast sausage for various meals. My fave is and All-In-One Egg/Sausage/Cheese breakfast bite. 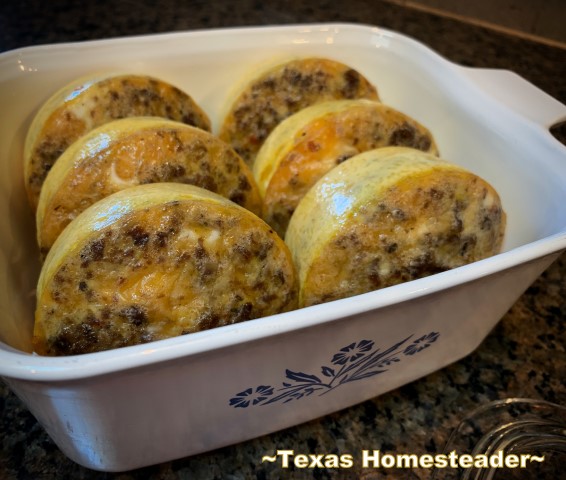 Although it’s delicious, I think it’s important to remember that no wild meat will taste exactly like its corn-finished commercial counterpart.

But we’re careful to harvest for our freezer either sows of any size or boars 75-lbs or less. A larger boar’s meat is often unpleasantly wild tasting.

But by being mindful with our harvest decisions, the pork meat is delicious, mildly flavored and very low in fat. We love it.

Sometimes I’ll flavor wild hog roasts more heavily to mask any potential wild taste. But most sows and small pigs have no wild taste at all.

So I’m cooking most roasts the same as I did the purchased pork roast a few weeks ago. (and with the anticipation I’ll be enjoying carnitas tacos this weekend with the leftovers!)

Then the rest of the cooked roasts will carved & frozen for future meals as part of my Cook-Once, Eat-Twice method of cooking.

Many pork roast recipes are listed below, check them out!

So we’ll keep changing up the bait until we’re lucky enough to get another one in the trap in the future.

But this time we’re blessed that once again this Homestead we love has provided nutritious food for us for the cost of a little attractant.

And at least there’s one less hog to reproduce & cause us grief.