We had an armadillo digging deep burrow holes in our yard. We didn’t want to kill it but instead to trap and relocate it. But it’s hard to trap an armadillo because they’re not really attracted to bait. Come see what worked for us. 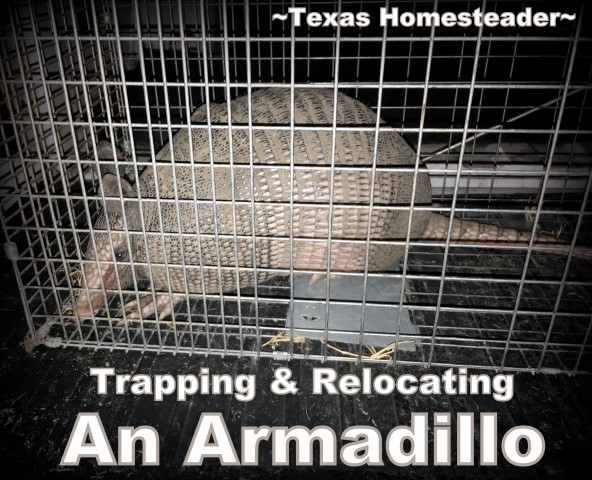 What Animal Is Digging Holes In The Yard?

One morning we found that an animal has burrowed beneath the rosemary plant by our back porch.

A wide and deep burrow has been dug and lots of dirt has been kicked up into the rock border of our porch and the burrow is obviously into the roots of my beloved rosemary plant.

What a mess! Looks like it may be an armadillo tunnel.

Now before I go any further, know that I’m simply sharing what we did to remove a pest that was encroaching upon our space. Our property was being damaged, plus we don’t want to risk a tussle with our mini Schnauzer Bailey & a potentially dangerous animal.

But we don’t like to kill a critter just for being what it is unless it’s venomous.

No, we’re not animal-trapping experts and we certainly don’t know it all. But here’s what we did to successfully trap and remove the armadillo:

A Plan To Trap An Armadillo

We decided a *Live Trap will be set to capture and relocate this animal because it simply cannot stay!

Not only is it tearing up our landscaping but we don’t want to chance our mini-schauzer coming into contact with something that could harm her.

Due to the size of the burrow, we’re trapping based on the premise that we’re dealing with an armadillo.

The mystery critter had previously dug lightly around our rain barrel. We’d raked the area smooth to repair the damage, but it came back the next day & dug the same area, this time more deeply.

We repaired the damage again blocked it off with a large stone and thought that was the end of that.

But the next day we found a deep burrow beneath our huge rosemary plant next to our back porch. It was about 2 ft deep and 10″ wide. I wonder if it’s a female & she’s looking for a place to have babies? 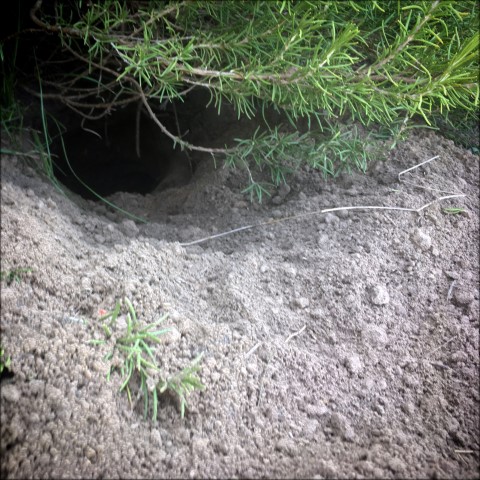 Upon close inspection we found the burrow was closed-ended & empty. RancherMan’s research showed this was probably just one of several ‘escape burrows’ that is typical for an armadillo.

Armadillos Are Hard To Trap

We don’t automatically turn to dispatching a critter unless it’s venomous or when other methods don’t work. So we started researching the best ways to trap an armadillo.

But we’re reading that armadillos are notoriously hard to capture in a trap. Any bait you use will not attract them because they root in the ground for their food instead.

So instead of attracting an armadillo, the bait in your trap could attract other pests such as raccoons, possums, etc. That certainly defeats your purpose!

Working With An Armadillo’s Natural Tendencies

So we set the live box trap (with no bait at all) right at the burrow entrance hoping she would come back to hide in the borrow and go into the trap instead.

The trap was placed right on top of the hole, the burrow opening aligned with the opening of the trap. Hopefully she’ll go into the trap not for food, but simply in her effort to enter the burrow.

Since she’ll be coming around after dark and we don’t want to stand outside watching for hours on end, we also placed a small *motion-activated sensor by the trap so we’d be alerted if/when she arrived.

When we heard the alarm go off around 10:30 that night we went out to inspect. The trap was empty but it was too dark to see very well to survey the surroundings closely.

So we came inside to get a flashlight & went back out to inspect more closely. In that short time apparently she went to hide in the escape burrow & went into the trap instead, just as we’d hoped! 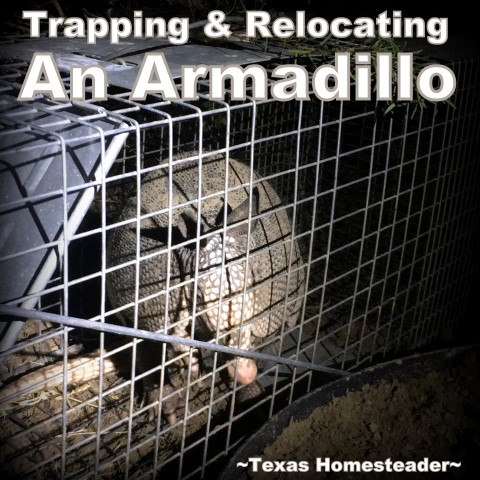 Isn’t she cute?? I’ve always loved the look of armadillos. They almost look prehistoric with their body armor.

We relocated her to the farthest back section of the pasture so she can do her armadillo thaaaaang without destroying our landscaping.

Will A Relocated Armadillo Return?

It’s said to assure they don’t come back, you need to relocate an armadillo over 5 miles away.

So even though this one was released in the farthest-away section of our 100-acre homestead pasture, she could technically navigate back to the house if she wanted.

But as long as there’s food, water and shelter there, I’m guessing that she’ll be happy right where she is.

Not Necessarily The Same Animal Returning

Many say that you must kill the armadillo because it WILL return unless you take it 5 miles away. But as I mentioned at the beginning, we don’t dispatch unless other methods of relocation are unsuccessful.

We’ve since had other armadillos that required relocation. We’ve trapped and relocated them to the back of our 100-acre homestead only to have the trap filled with an armadillo the next day, and the next.

So assuming it was the same armadillo coming back, we felt we had no alternative than to dispatch it. And we did. But the next night, the trap was tripped again with yet another armadillo!

So my guess is that sometimes there are several in a group of armadillos that might come to the burrow. Maybe they’re attracted by scent or something? I don’t know.

But it proves to me that just because the trap might be filled even after relocating an armadillo doesn’t mean it’s the same armadillo coming back. Sometimes you’ll need to relocate several to finally move the small group.

Trapping and Relocating Armadillos Was Successful

My experience is that when we relocate critters as far away as we can, even though it’s not 5 miles away, they find food & shelter abundant where we move them.

Then unless there’s a reason for them to trek all the way back to the original location they can just continue on with their lives.

If she (or another like her) encroaches on our space again we’ll trap them again. But we realize how important different critters are to the ecosystem. So our preference is always relocation instead of killing a critter.

This live trap has been helpful so many times. So far the relocations we’ve had to do with armadillos, possums, snakes and raccoons have been few & far between. 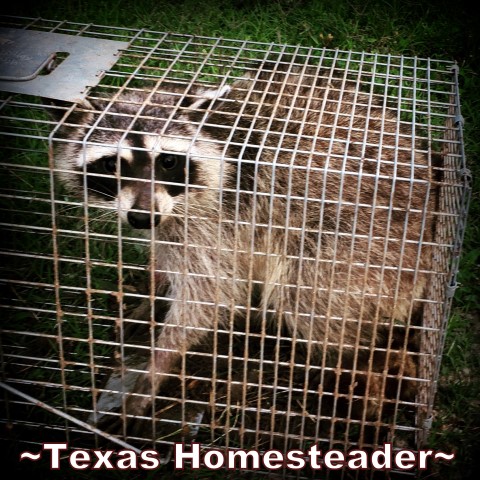 Sometimes we have to trap the whole family of critters & remove them one by one, but typically that’s the end of it.

So for now we’ll chalk our armadillo relocation up as a SUCCESS!

8 thoughts on “Trapping & Relocating An Armadillo”