Is stuck-on food frustrating you while cleaning your cast-iron skillet? I’ve found an EASY way to get it clean. Check out my lazy-cook’s method!

Properly seasoned cast iron is virtually non-stick. But to preserve the coveted finish of cast iron, the method required to clean it is different than other materials. But even so, it’s not hard at all. Just slightly different.

The skillets in my kitchen are comprised of a single stainless steel skillet for making my Homemade Chocolate Pudding and such, & several sizes of cast-iron skillets for cooking virtually everything else.

Now I love my stainless steel skillet. But let’s be honest, I love cast iron the best.

And although mine’s virtually non-stick after decades of use, there still comes the time after frying starchy potatoes or cooking scrambled eggs that results in a layer of cooked-on food to remain on the bottom of the skillet.

Now back in ‘the day‘ I’d scrub-scrub-scrub to get it clean again.

That was then, this is now…

Cast Iron Cookware Gets Lots Of Use

My cast iron skillet gets the most action in my kitchen. I make spicy Cornbread and Bake Bread in cast iron.

And I use those skillets on the stove top too for cooking Potato Cakes, frying potatoes or cooking eggs. (or anything savory really!)

It rocks my world whether I’m using it stove top or in the oven. It does it all.

How To Clean Cast Iron Cookware

It’s true that Caring For Cast Iron is a little different than cleaning typical cookware. You can’t just  plunk a cast iron skillet in the dishwasher like you could other cookware materials.

And although some people use soap on their cast iron when cleaning, I never have. I really want to preserve that long-term seasoning of the metal that only years of use can give.

And finally, since cast iron will rust it’s helpful to preserve the finish by applying a light coating of oil after it’s clean and dry.

But how do you clean your cast iron when you actually have a bit of food stuck on the surface? 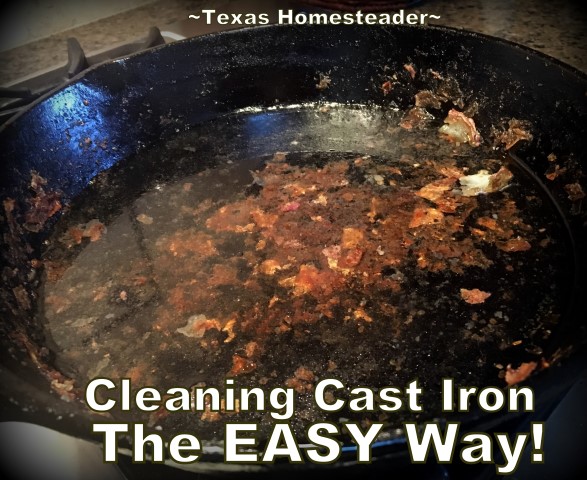 Well I’ve discovered an oh-so-easy way to clean stuck-on food such as scrambled eggs or fried potatoes from my cast-iron skillets.

Of course I’d think this would work with any skillet, not just cast iron. But oh man, you’re not gonna believe how easy this is…

I don’t even have to go that far, my way is by far easiest for me.

If I have cooked-on food in my cast-iron skillet, first I place a tiny amount of water in the skillet. I don’t need much, just barely enough to cover the bottom surface of the skillet.

Then I place it on the burner and turn on the heat. Since there’s so little water in the skillet it takes less than a minute to get things simmering.

Then I simply turn off the heat & place a lid on the skillet. I’ll let it all cool down on it’s own as I go about my other kitchen-cleaning tasks.

This basically steams loose the stuck-on food. By the time I finish cleaning the kitchen, the water in the skillet has cooled.

So I remove the lid and use my spatula to effortlessly scrape away the previously stuck-on food. 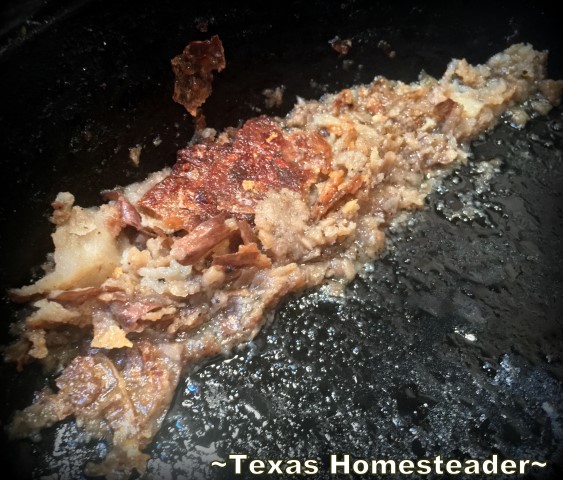 I’m not kidding – it’s THAT easy! It all scrapes away easily without sticking to the bottom or sides of the skillet.

So I scoop out the food I’ve scraped away & throw it in the trash.

Then I take my cast-iron skillet to my sink where I use my dish scrubber and hot water to finish cleaning it and BOOM! Cast-Iron Perfection. 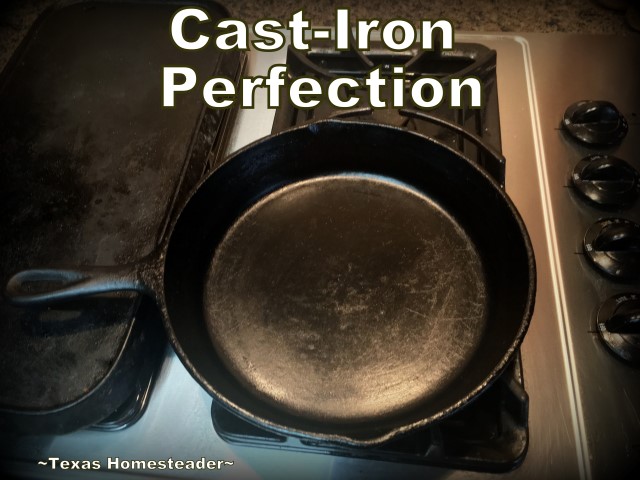 If needed I’ll run a thin layer of grease along the inside surface to keep it seasoned beautifully.

Then back into the storage drawer where it’s ready and waiting for next time.

Cast iron is my favored cooking material. It’s easy to maintain and it lasts for decades.

I have several cast-iron skillets of various sizes, but my favorite is my grandmother’s skillet.

Isn’t she a beauty? This square cast-iron skillet was presented as a wedding gift to my grandmother back in 1934 when she and my grandfather were married.

Then she gifted it to me back in the 1990’s and I’ve been using it ever since. Of course I’ll be passing it on to my children as well.

I daresay that modern cookware doesn’t have THAT kind of longevity!

See All Our Natural Cleaning Posts

5 thoughts on “Stuck-On Food? How To Easily Clean Cast Iron”