As a matter of routine I make my handsome RancherMan his favorite sandwich bread since I’ve FINALLY been able to nail down a homemade bread recipe that resulted in a light fluffy loaf. Since I make bread often I have come up with some Bread-Making Shortcuts so that I’m not starting out from scratch each & every time.

One of the shortcuts involves amending my 2-loaf recipe to three loaves since my oven will hold 3 loaf pans at one time. But y’all know how confusing it can be when you’re changing a recipe and wondering how many cups you’ve already added. I started using today’s Homestead Hack waaaaay back when my children were young. It seems they were constantly coming into the kitchen breaking my concentration while I was baking.

When measuring and adding ingredients I used to often stop midway through and ask myself “Was that 4 cups of flour or 5 that I just dumped into the bowl?” So now when I’m baking (and especially when I’m changing a recipe).

I’ll bring out a small cup that I keep nearby containing a few of my grandmother’s old vintage buttons. From that small cup I pick out 7 large black buttons and one smaller white one (for the 1/2 cup). When I dump a cup of flour into the bowl I slide one of the large black buttons aside until they’re all moved. Then I measure & add my 1/2 cup for the white button. I don’t even have to keep count – when the buttons are moved, I’m done! I use the same procedure whether I’m measuring cups of flour or teaspoons of yeast. 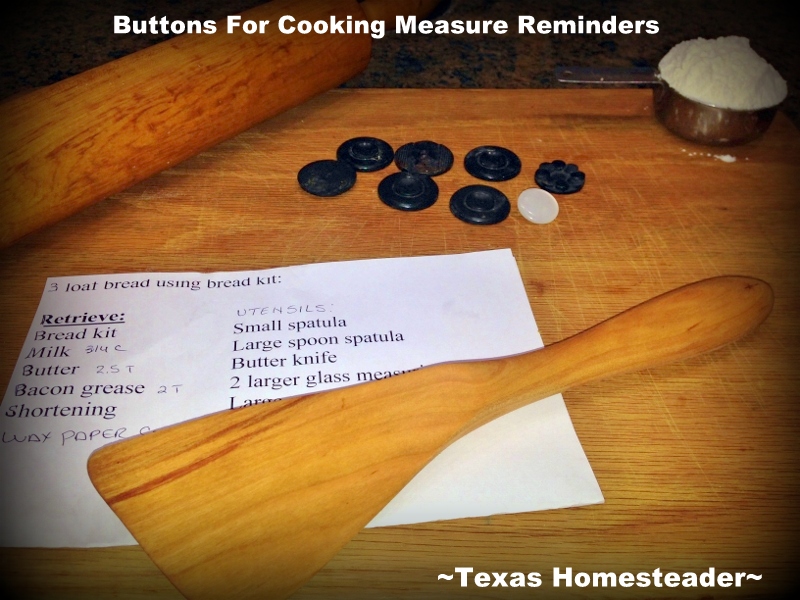 The buttons are then wiped off and placed back in the cup, ready to use next time! This Homestead Hack has served me well for many years. And it’s probably saved more recipes from disaster than I can count! I also love that my beloved grandmother still has a hand in my baking…