I’ve discovered that although garden peppers are delicious served in many ways, my favorite flavor is accomplished by roasting them. Roasting peppers brings out their natural flavor. But y’all know me – I love shortcuts.

You like to use shortcuts too? Check out this simple Homestead Hack, y’all.

Roasting peppers adds a depth of flavor that’s hard to beat. We love all kinds of peppers, but especially poblanos and bell peppers.

When the garden is pumping out those peppers I’m going through them almost as fast as they’ll produce. Jalapenos, poblanos, bell peppers, banana peppers – I love ’em all!

So when I’m making Chile Relleno or Creamy Hatch Sauce and wanting to use my fresh garden peppers, roasted is the way to go. 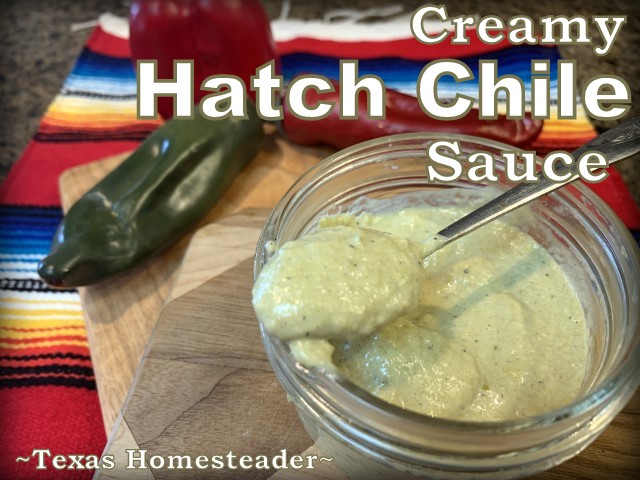 But, you know – peppers are producing most prolifically during the hot & humid months of summer. I can’t stand the thought of turning the oven on high and roasting those peppers. Even for the delicious end result.

NOTE: this hack is for gas-powered stoves with an elevated grate only. (ie: don’t try to roast peppers directly on top of your electric element coil on an electronic stove) But using my gas stove this pepper-roasting shortcut works beautifully for me.

Roasting Fresh Peppers On The Stovetop

When I’ve harvested the peppers I bring them inside and give them a quick rinse. Then I’ll let them air dry for a few minutes.

Now it’s showtime! I’ll turn on my gas-powered stove’s flame, take that fresh pepper and put it right on top of the grate with the fire directly beneath it. 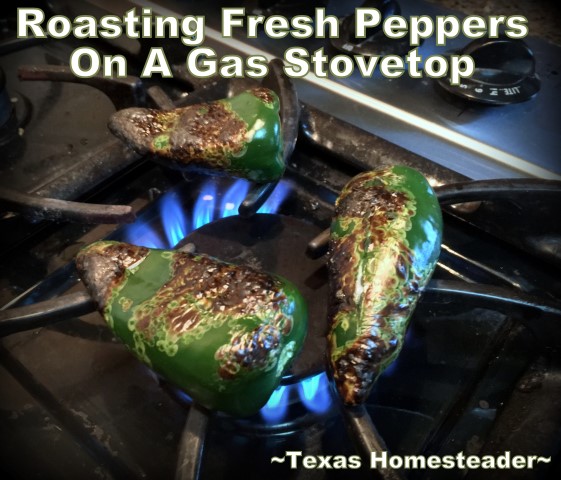 Sometimes I use a super-long meat fork to hold the pepper over the flame. But sometimes I place the peppers directly on my stove’s burner grate and let the flames hit the pepper’s skin.

It begins popping pretty quickly as the flame scorches the outer side of the pepper. Each surface only needs a minute or so of direct flame.

I’ll slowly turn the pepper whether using a long meat fork or long tongs until all surfaces are blackened. It’s important to use a long utensil here to keep your hands safely away from the flame.

How To Roast Smaller Peppers On The Stove Top

I’ve used this shortcut with larger peppers such as poblanos and bell peppers. But it’s difficult to keep smaller peppers from falling through the stove grate.

To roast smaller peppers like spicy jalapenos or milder New Mexico peppers I place a metal heat-resistant wire cookie rack across two of my burners and lay the peppers on the rack instead of the stove grate. It works well to more evenly distribute the smaller-sized peppers across the flame.

Careful when roasting a spicy hot pepper, you sure don’t want to be standing right over them and breathing in that spice! #askmehowiknow

Do You Need To Steam Peppers After Roasting?

Yes! Steaming roasted peppers helps to soften the blackened skin and makes it much easier to peel away.

Yeah, easier in the kitchen is a good thing, no??

So when all pepper surfaces are roasted & blackened I’ll place the peppers in a bowl and cover them with a towel. I’ll allow them to steam until they’re cooled.

Do You have To Peel Roasted Peppers?

Some peppers such as bell peppers have skins that are thin enough that I oftentimes leave the blackened skins intact.

I like the smoky flavor it imparts to some dishes. 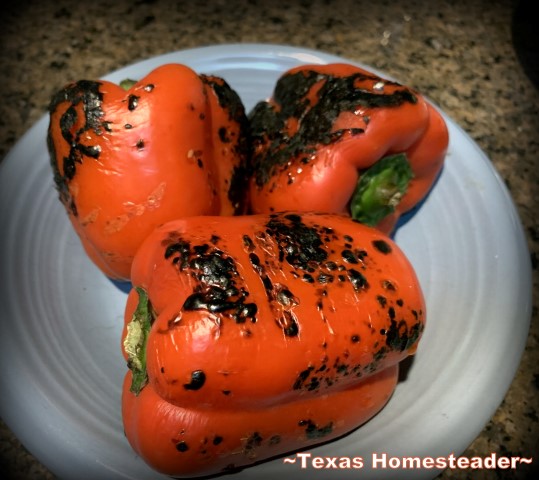 But some peppers such as poblano peppers have tough skin. I like to peel those to assure a better texture in my dishes. Don’t worry, after steaming the roasted pepper the tough skin will peel off easily.

A quick rinse to make sure I’ve gotten all of it and my pepper’s ready to be used.

Now that I have freshly-roasted peppers I’ll use them in whatever dish I’m making.

But depending upon how many peppers I’ve harvested, oftentimes I have more roasted peppers than my dish calls for. My garden can really be pumping out the peppers this time of year!

So the leftover roasted peppers are cooled, peeled if necessary and then diced up. I’ll place the diced peppers in a repurposed plastic bag such as the kind dry beans are often sold in.

Then I’ll place that repurposed bag of roasted peppers inside a freezer bag. That will not only protect them from freezer burn but also be able to seal up tightly and keep that freezer bag reusable since no food’s touched it.

(taps on noggin… Not just a hat rack, my friends! Ha!)

But before closing the freezer bag I’ll insert a slip of paper between the two bags that identifies the contents. (because you know all frozen chunks of food almost look alike!) Then I just slide it in the freezer.

Those roasted garden peppers now stand ready and waiting for me to use at a moment’s notice. They add a delicious roasted-pepper flavor to many dishes throughout the year. And I’m even able to enjoy garden goodness in the cold winter months!

By doing this I’ve preserved the garden bounty without wasting any peppers as well as  intensified the flavor of them. AND I’ve provided my own freezer convenience food as well. Win/win y’all! #WorkSmarterNotHarder.

One thought on “Quickly Roasting Peppers On A Stovetop”