I’ve always tried to make sure my family ate a well-balanced diet. Of course I don’t feel there’s anything wrong with eating some less-healthy foods… as long as it’s in moderation.

Fried foods, sweets, salty snacks – all were ok as long as they were enjoyed in proper moderation.

My goal was to get them to eat more of the healthy stuff, go lighter on the less healthy stuff and just enjoy actual junk foods on rare occasions. Luckily I found a sneaky way to tip the balance toward the healthy food. Here’s how I got my family to willingly eat more healthy veggies.

Getting The Kids To Eat More Veggies

When the kids were little I’d use this trick:

I always had raw vegetables cut up and readily accessible in the refrigerator. Oftentimes it was simply baby carrots or broccoli crowns. But to the kids I called it ‘Veggie Snack‘ to make it sound even more enticing! Sometimes there was ranch to dip them in, but oftentimes they opted for just the crunchy veggie.

(yes, this is the exact same hack I used with with them for frozen applesauce instead of sugar-filled popsicles too… LOL)

So if I was fixing dinner when one of the kids came to me saying they were hungry, I’d bring out this grab-n-go veggie snack and tell them they were free to nibble on some before supper.

The kids felt they were getting away with something to be allowed to snack before supper. But I didn’t mind nor did I worry it would ruin their appetite. I knew it was simply a healthy serving of vegetables!

It’s Not Just For The Kids…

Truth be told, even though now it’s just RancherMan & me I still use this hack.

Currently in my refrigerator I have a vintage jar filled with sliced raw carrot strips. I put a little water in the bottom of the jar to keep the carrots crisp. 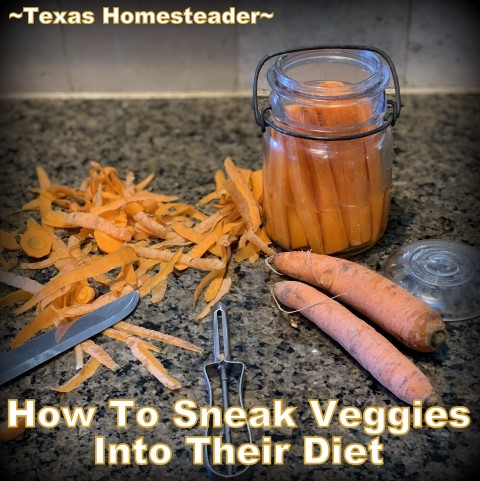 On any given evening RancherMan is typically in the kitchen with me asking what he can do to help in the meal preparation. #dontyoujustloveit??!!

So when I go into the kitchen to begin making supper, I often bring this jar out of the refrigerator and set it on the counter.

Of course I grab one and munch on it as I’m preparing supper. You know, so I can plant that seed.

Aaaah, the power of suggestion!

When he sees me munching on a crunchy carrot he’ll often do the same. As a matter of fact he typically enjoys several carrots while supper is being prepared. It’s an easy way to get him to eat more veggies that he loves.

Then when our meal is actually served I’ll leave that jar of crisp carrots on the table so they can become additional crunchy mealtime food too before returning them to the refrigerator to await their next counter-top appearance.

I never have to worry that the carrots I buy will go bad in the refrigerator. They’re brought out and enjoyed often.