I’d wanted to get a bidet (pronounced bid-day) for a long time. It can replace toilet tissue, and cleans with a gentle stream of water instead.

Plus I’ve heard folks singing the praises of the cleanliness difference between using toilet paper vs. a bidet. So I asked RancherMan to research and find the best model for us.

We decided on a model that has dual nozzles and adjustable settings. Installation was fast too. But there’s an issue with some toilet seats you’ll need to be aware of. (No worries, it’s a simple fix.) 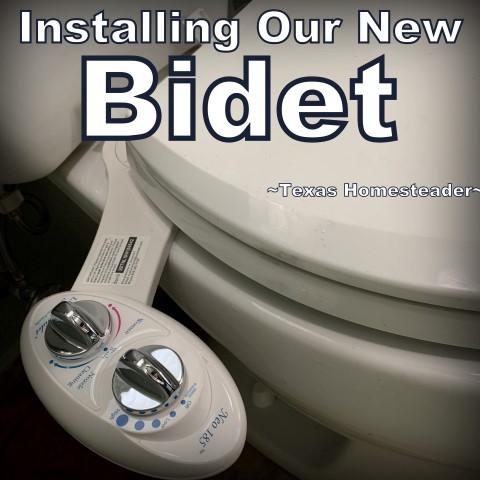 Advantages of A Bidet

Out here we’re on a septic system. So keeping toilet paper out of the system just keeps it healthier.

Plus, less paper in the septic means we can go longer between times that the septic tank must be pumped out. So it can be a cost savings too.

We went disposable paper-towel, paper napkin & paper plate free over a decade ago. Disposables in any of their forms are always shunned here.

So a bidet will be an eco win for us as well.

Now when we’re researching a purchase, there are many things we look at. It’s never just about the cheapest product out there, but often we do search for the best deals too.

Then he’ll narrow it down to the features we want. And then and only then will he hunt for the best price.

He decided on the *Luxe Bidet NEO 185 for our home. I like that it has two separate settings, which was a nice feature.

And the pressure of the spray can be easily adjusted with the control knobs on the side. The knobs were recommended by many users over the levers used by other models.

So the Luxe Neo 185 is the model we decided to purchase.

At the time of our purchase the Luxe bidet was only about $35. Wow, shouldn’t take long to recover the purchase price simply due to the savings of toilet paper purchases!

Installing The Bidet Is Easy!

The bidet was ordered and received quickly. The kit came with not only the bidet, but a flexible water connector, a T-connector, some teflon tape to seal the connections and even appropriately-sized installation tools. Everything you need in this one box. 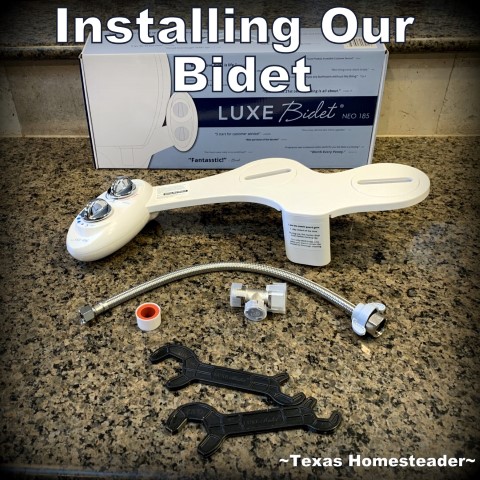 Basically you’re just changing the one line that reaches the toilet by adding a t-connector & line so water can run to the bidet as well.

First he had to turn the water off from the wall to the toilet. Then he flushed the toilet to remove the water from the toilet’s tank.

Now it’s time to hook up the bidet’s water source. RancherMan put a towel on the floor because he knew there would be a tiny bit of water that would drip from the line when he disconnected it.

So now one water source goes to the toilet (as it always had) while the other water line also sends water to the bidet. Now that the water’s all hooked up it’s time to install the bidet.

Everything was reattached with the same bolts that once held the toilet seat to the porcelain. Then he connected the water flexible water line to the bidet unit.

Wow, that was easy!

Then we stood back to check it out. But wait, what’s this?

The toilet seat no longer rests on the porcelain bowl when it’s closed! 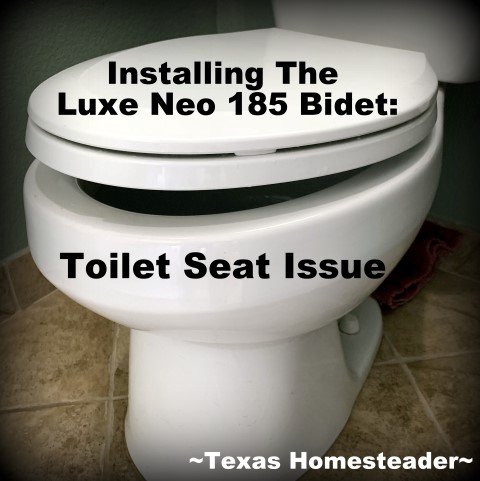 Back to the instructions where RancherMan found a small notice in the troubleshooting section that read:

Problem: After installing the bidet, the toilet seat does not rest flat on the toilet bowl.

Possible Solutions:
1. If the extra space is 1/2” or less, install *toilet seat bumpers.
2. Find a toilet seat that is flat at the bottom and does not come with outer hinge tabs.

We looked closely at our existing toilet seat and it did have a curve on the underside. Ugh, wish we’d noticed that when we were ordering our bidet! 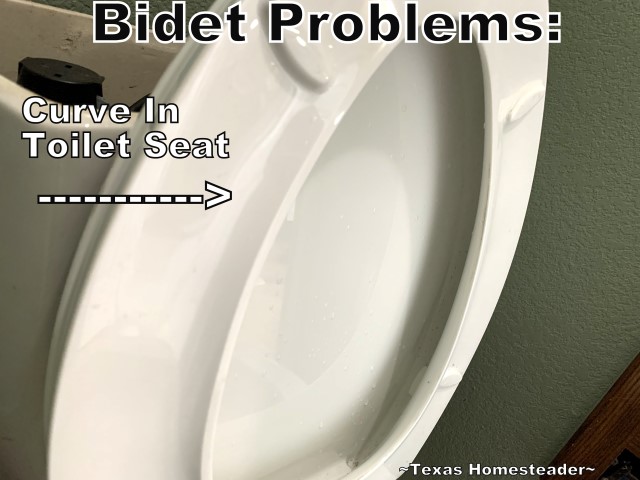 Thankfully it’s an easy problem to rectify with adjusting bumpers. These ‘bumpers‘ attach to the underside of your toilet seat to assure it rests firmly & properly on the porcelain bowl.

We considered just buying a new toilet seat vs ordering the bumpers. But our toilet seat was pretty new.

Plus, you know how much I hate buying a new whatsit to replace and throw away a perfectly good whatsit. It’s an environmental decision for me. So we decided on the bumpers. They were cheap!

They were ordered and received quickly, RancherMan installed them in minutes.  You can see the light-gray bumpers in the photo below. 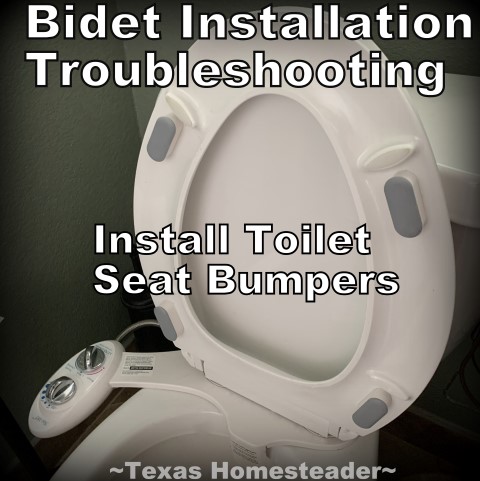 The bumpers simply have a strong adhesive to attach them directly to the underside of your toilet seat.

They worked perfectly to rectify the problem. The toilet seat now rests firmly on the porcelain bowl.

So it will be helpful if you inspect your existing toilet seat before you order your bidet. That way you can order the bumpers at the same time if necessary.

Using the *bidet means we’re not having to use toilet paper unless we want to. Instead, all that’s needed is soft cloth to blot dry the water from your skin.

I’ve used color-coded squares cut from soft, worn t-shirts. But I settled on a set of inexpensive color-coded washcloths folded neatly in a wire basket sitting on top of the toilet tank.

The cotton material is perfect for this use. And I’m pretty thrilled with our new bidet.

4 thoughts on “How A Bidet Can Be An Eco Win”