Even though it’s now winter RancherMan & I are taking steps now to assure a productive garden next spring. It’s now time to put the garden to bed for the winter.

One of the many blessings of living in NE Texas is that we’re often able to enjoy lovely temperate weather well into December. Even mid December we’re still enjoying cool days with highs in the mid to upper 60’s, even the mid to upper 70’s some days. Gotta love it!

So now that the garden is officially done for the season RancherMan & I are taking advantage of this warm weather streak to prepare the garden for war next year.

I hate Bermuda grass in the garden because it battles mightily to thwart my attempts to garden each. Every blasted year so I work with a goal of eliminating Bermuda grass in my garden.  I’m not gonna lie, I’ve lost that battle every year so far. This past spring with a hopeful heart I tried Deep Mulching The Entire Garden Area to eliminate anything growing where it wasn’t desired.

Although it worked beautifully to eliminate grass & weeds, the wet spring meant that the Bermuda boldly marched across the TOP of my thick mulch, anchoring in roots along the way until it was firmly entrenched once again in my raised beds where it’s impossible to irradiate without starting over.  (sigh…)

Changing My Garden Plans To Try To Defeat Bermuda Grass

So early this week I was helping RancherMan make plans to finally win the Bermuda war next season by ripping out my current shorter raised beds & building taller 3-ft high raised beds. Our thought was that even Bermuda couldn’t grow through 3 feet of soil to infiltrate my planting area.

But then a couple of days ago we switched the plan and decided we would keep the current shorter raised beds since they were already in place but eliminate Bermuda from coming into the garden area by constructing a chicken run around the perimeter of the garden.

Our thought was that an enclosed chicken tunnel run around the perimeter of the garden would allow the chickens a safe place to roam while keeping the grass scratched away before it reaches my planting area.

I love the symbiotic relationship between chicken needs and garden needs coming together to serve each other beautifully.  But there were unworkable complications with that plan too – especially since my garden includes two walk-through gates on opposite ends – one entrance gate from the yard and one gate to gain access to the cistern that carries irrigation water to my plants.  There was also the problem of my concord grapevine permanently growing along one fence.   We just couldn’t realistically make the chicken tunnel work.  Back to the drawing board…

Settling On A Garden Layout Plan

So a few days later we discussed our garden layout changes at length and now we’ve changed our CHANGE! We’ll still integrate the chickens into a section of this enclosed garden space and rototill raised rows to plant instead of being restricted to a specific wood-lined planting area.  My actual garden planting area will be smaller but with about the same production since there will be less wasted space. 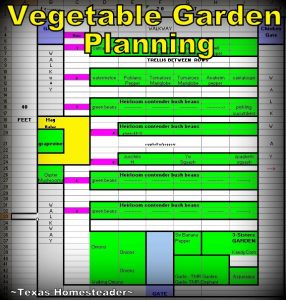 The chicken area will keep that section Bermuda-grass free, resulting in a smaller area we must tackle to stop the march of the Bermuda into my planting space.  We’ll incorporate a no-planting zone around the perimeter of my planting area where we’ll attempt to control the Bermuda with a combination of tilling, mulch and even chemical control as a last resort.

Ripping Up And Starting Over

So with renewed hope the current raised beds were disassembled and the wood was stacked out of the way.  We’ll repurpose that wood for use in remaking our picnic table as well as replacing some of the wide boards on our flatbed trailer so none of the valuable 2×6 long lengths of wood will go to waste.  I got to work digging up the garlic that was sprouting in the beds and transferred them to large containers that were heavily mulched with grass clippings.

Then RancherMan brought out the tiller and shallowly tilled the new planting area but only about 3 inches deep.  We don’t want to till too deeply since we’re just trying to break up the top layer and chop up the grass that’s currently growing there.

In the meantime I’d already emptied out my *Tumbling Composter so that the contents could finish making that precious black gold compost for next year’s garden.  (Yes, I love that tumbler for the ease of making compost! ) 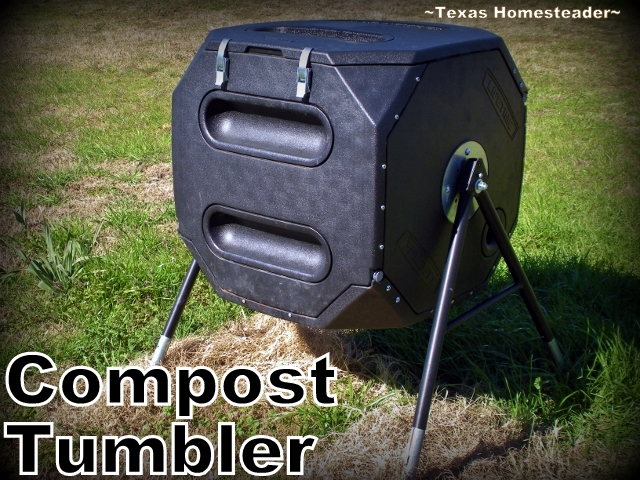 I left a small amount of unfinished compost in the tumbler to give the next batch a jump start & also added several shredded heavy paper cattle feed sacks to give it some carbon ‘brown’ material to the mix and then I gave it all a whirl.

But I also wanted to add some manure so I got to work gathering it.  It’s wonderful having this resource available to me for just the cost of my labor.  I took a wheelbarrow to our hay-feeding area, gathered manure with a shovel and filled several wheelbarrows full.

I dumped about a 5-gallon bucket’s worth into my tumbling composter and gave it a final turn and the rest was all taken to the newly-tilled garden area and dumped in piles.  I allowed the chickens that are currently restrained to the garden area scratch and spread the manure for me, then I took a dirt rake & spread it haphazardly throughout the tilled area. 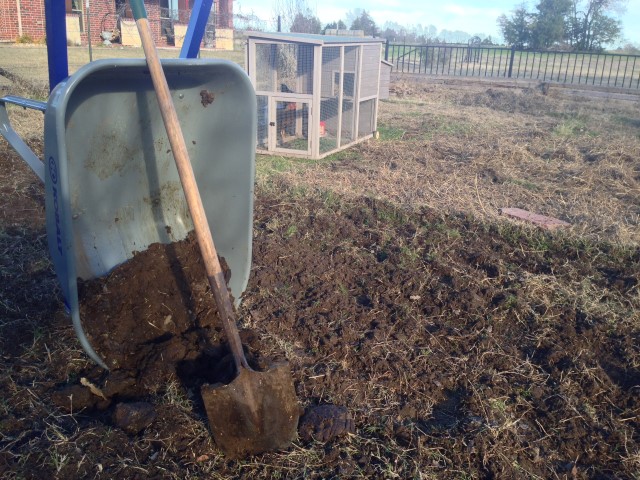 RancherMan allowed this area to sit for several days and then he ran the tiller over it again to blend everything up nicely.  He wants to allow it to sit undisturbed for a while before giving it one more light tilling after a cold hard freeze when everything’s finally dormant.

After that final tilling of the year we’ll seed the area with either winter rye grass, crimson clover or a mixture of the two – either will serve as a cover crop but the clover will also fix nitrogen into the soil.  Then all that will be left to do is wait.  We’ll retill this area in February to break up the cover crop, then again in March right before planting to make sure the ground is ready to receive my tender seedlings.  Stay tuned to see if we finally successfully win the war against Bermuda grass in the garden next season!