I typically have an ‘indoor greenhouse‘ that I use when I plant heirloom seeds in the late winter months. This means I’ll be able to actually put seedlings in my garden come spring instead of planting the seeds directly into the soil later in the season.

But this year I wondered if I should attempt to set up a cold frame to take my plants from tiny seedling to ready to plant. So to experiment I started looking around for a good southern-exposure location & items I could use to build a temporary cold frame. Why not use hay bales? 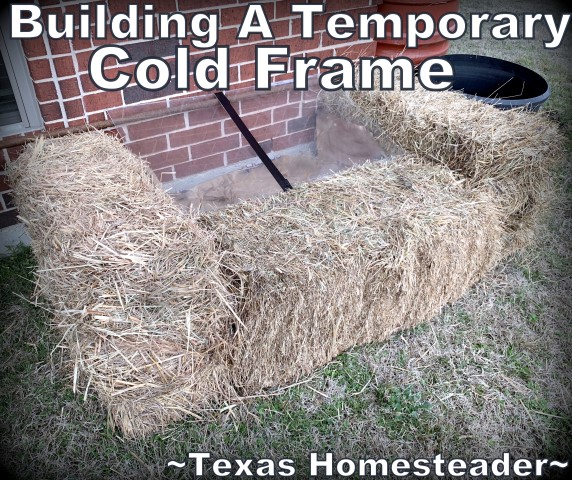 Our home has a nice brick section that faces south. This is also right next to one of our rainwater catchment barrels too so it’ll make for easy watering.

Setting Up The Hay Bales

I took 3 square bales of hay and set them next to this section of wall. I sat the two sides up on their edges to make them a little taller, then set the bale between them regularly so it would be just a smidge shorter. This should give me the angle toward the southern sky that I desire. 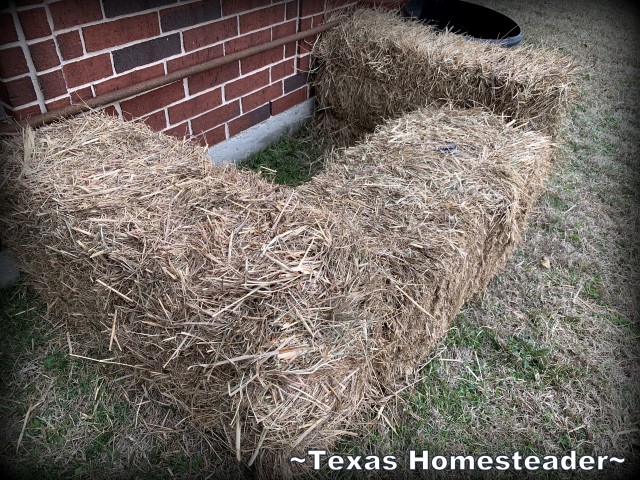 To capture the sun’s warmth I need to top it with a clear surface and tilt it toward the southern sky. This will make a warm greenhouse of sorts. But we didn’t have an old repurposed window or piece of glass to use as many others do. Hummmmm…

RancherMan looked in the shop and found two pieces of clear plexiglass that was exactly HALF the size I needed. So he used heavy duct tape to temporarily attach them together to make my clear surface.

Now I’m assuming that since plexiglass isn’t as substantial as an actual glass-pane window that my heat transfer won’t be quite as high using it. So I’ll be on the lookout for an old window to use here in future years to increase the efficiency. 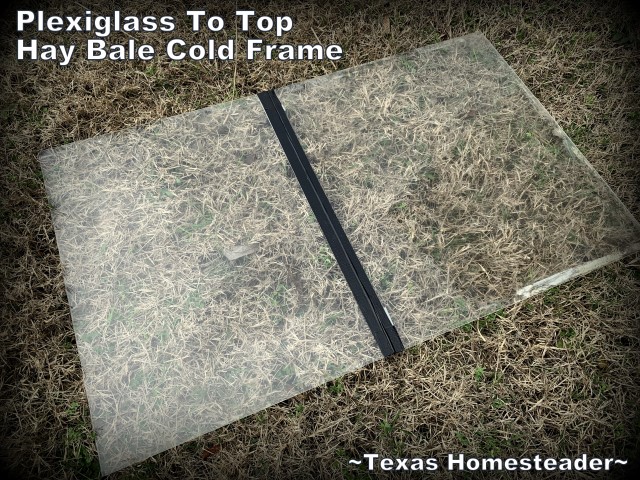 I also placed a steel rod across the back right at the brick wall. This gives a stable surface to lay my plexiglass piece atop the bales. Because of the way I’d set these three bales up the glass tilts toward the southern sky. Remember, I placed the hay where the sides were taller than the bottom. So it worked perfectly. Yeah, I like it!

Now when my tiny seedlings outgrow their small seed-starting space in I can place them here to let them harden off and grow a little larger before placing them in the garden. The slanted plexiglass will trap the sun’s heat inside to keep the seedlings cozy even when the temps are dangerously low.

When the danger of the last frost has passed I’ll be ready to drop those babies into the prepared garden soil. And the beauty is that unlike built wooden structures, my hay bale cold frame is temporary. If the bales are made of hay I’ll feed them to the cows. Or if those bales are straw I’ll use them for moisture-saving mulch in the garden. One way or the other they go on to another valuable use.

The plexiglass will slide neatly out of the way in the shop again and we’ll be ready to repeat it all  next year. Don’t you just love when things are multi-purpose??