Well, we’re almost at the end of our Fresh Apple Series where I share various things I’ve been able to preserve using fresh apples in the peak of their season.  And what a series it’s been!   I’ve of course made Slow-Cooker Applesauce with many of the apples.  I’ve even made and canned some of that applesauce into Cinnamon-Vanilla Flavored Applesauce.

Plus I  made and canned Apple Pie Filling for quick homemade pies.  And of course one of RancherMan’s favorites too.  I dehydrated some of those delicious apples into crispy Cinnamon/Sugar Apple Chips.  But we’re not done yet, oh no!  Those apples still have deliciousness to offer to our family.   Today I’m sharing how I preserved my Homemade Apple Cider. 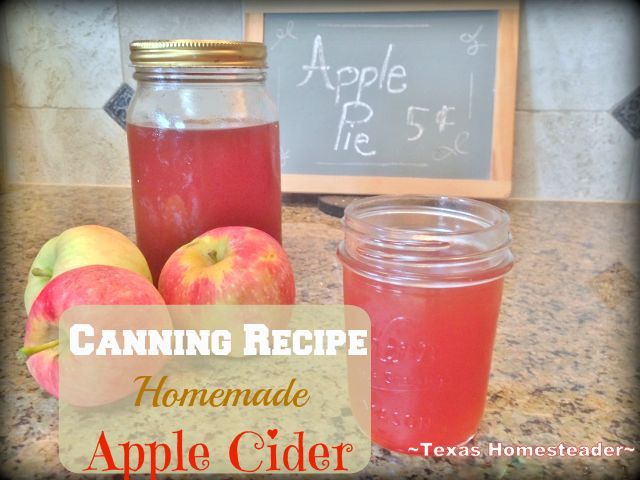 While cooking my applesauce, the apples released much of their juice.  But I’m not going to drain it off and dispose of it.   When I saw all the juice that was remaining I couldn’t help but to think about the cooler weather to come.  I want to save that juice and can apple cider to enjoy this winter!

So as I was making my applesauce I strained the juice using a fine mesh strainer.  The juice was stored in my refrigerator.  When all my applesauce was done I pulled out that juice and strained it once again.

Some people might like this final strain to be done using a coffee filter to get all the tiny particles of apple that are remaining.  But I like the slightly thick consistency that these teeny-tiny bits offer.  So I just strained it again using the fine mesh strainer and stopped when I got to the apple sediment at the bottom of my container.  This was about perfect for me. I placed that strained juice in my stock pot and turned on the heat to medium to begin heating it up.

In the meantime I pulled out my canning jars and washed them up.  I filled them with water and placed them in my water-bath canner.  Of course the canner was also filled with water to the top of the jars.  Then I placed the whole shebangie on the stove to heat.  By heating these clean jars for a bit I’ve sanitized my jars in preparation for canning.  Plus by filling hot jars with hot liquid you have less chance for breakage than if your jars were not hot.

I also brought out my canning jar lids.  Some were standard lids but some were my *Tattler reusable lids because I love that they can be reused over & over again.  I typically use about half traditional & half Tattlers when I’m canning so I get the pleasure of hearing that “PING” with the traditional lids while still utilizing the reusable Tattlers.  Plus since I don’t want my Tattlers leaving the house.  So using some traditional lids when I’m canning assures that I have some of these jars of cider available to give out with our homemade Christmas Gifts if we like.

Anyway, I prep the lids by first boiling some water in a small pan.  Then I remove the pan from the heat and drop the lids into the hot water to soften the rubber.  You don’t want to boil them – just get them nice & hot.   I cover the pot to keep everything good & hot until I need them.

By now my apple cider is boiling and my jars have been sanitized. Finally I’m ready to start canning.  In this case the canning is easy-peasy! I just ladle in my hot apple cider into my hot jars leaving only 1/4″ head space.  Then I wipe the rims of the jar with a damp rag to assure no apple bits or juice are between the jar and the lids to keep them from sealing properly.  Finally I attach the canning lids and return the filled jars to the water-bath canner.

Once my water begins boiling again I set my timer for 10 minutes to process the jars.  When the timer goes off I carefully bring out the hot jars and place them on a kitchen towel.  There they will remain there undisturbed overnight.  I do love hearing all those jars go “PING!”

The next morning I removed the rings and tested for proper seals.  The traditional lids will be slightly sunken in at the middle and will make no plinky-noise when pressed.  The Tattlers will remain tight when light pressure is used as if you were trying to gently remove the lids.  Hooray – all sealed! Now all that’s left to do is wash down my jars, label them with contents and date. I store them all in my pantry. 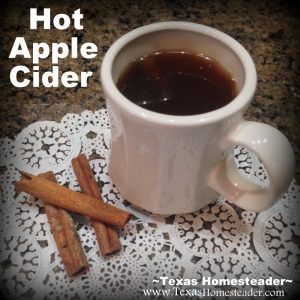 During those raw winter months I love to sit on the couch snuggling with my handsome RancherMan under a blanket. A blazing fire in the fireplace and a steaming cup of spiced apple cider stirred with a cinnamon stick to warm me from the inside out.

C’mon by & sit a spell!  Come hang out at our Facebook Page.  It’s like sitting in a front porch rocker with a glass of cold iced tea – lots of good folks sharing!  You can also follow along on Pinterest, Twitter or GooglePlus.