RancherMan & I were running errands in a nearby town recently and we decided to stop for a quick bite to eat.

It was raining and there were rivers of water running through the parking lot, so a close parking spot was nowhere to be found.

We parked at the end of the building and made a run for the doors. As we finally reached the doors drenched from the rain, RancherMan leaned forward to open the door for me as he always does.

“PLUNK” – The door was locked.

OMGosh for the love of PETE – someone please help this make sense for me. Why oh why do so many business have TWO doors to their establishments only to have one locked at all times??

And we’ve even run across some businesses that post a permanent sign to inform patrons to use the other door forever! WHY?? (smh) 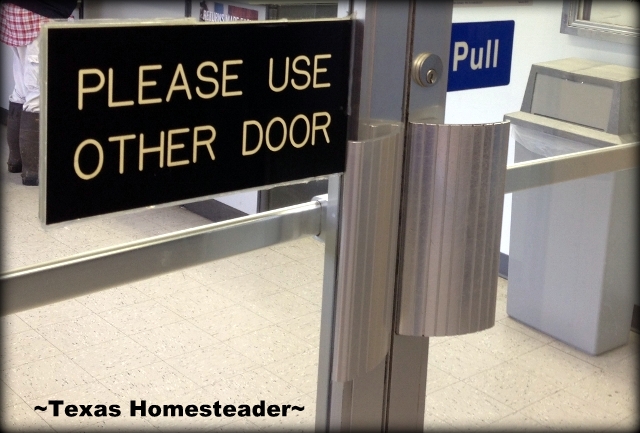 Does anyone have any insight into why businesses routinely lock one of their doors & force patrons to use the other? Maybe there’s a reason?

But I’m thinking if a fire broke out at this fast-food place during the busy lunch hour & all patrons rushed to the door, they would be met with one of those exit doors – their pathway to safety – being locked.

I know what happens in a fire-panic situation where people mob to the exit only to find it locked.

Yes they can try the adjoining door, but by that time they are not exiting in a straight line. Now they’re backing up, looking around, changing directions, stumbling, falling, etc. And each person that falls becomes an exit obstacle for the person behind them, and so on.

Because of my long tenure in a fire-protection field I’ve had to be aware of so many tragic events at restaurants, night clubs, etc. I’ve seen way too much fire tragedy.

Fire safety is in my blood. My father retired as captain of an Oklahoma Fire Dept after 21 years of service. And he was also a photographer for the newspaper on days that he wasn’t on duty as a fireman.

He had his own photo development equipment so there were always lots of fresh photographs of the action.

The Picture that Changed My Life

I remember as a child being curious about the pictures of the fires he had taken. So I started flipping through the stacks of large 8×10 black & whites. One particular photo made me stop in my tracks…

It was a firefighter giving mouth to mouth to a small baby in an attempt to revive her, with her melted skin stringing from the brave hero’s fingers. That sweet baby didn’t make it and that picture haunts me still.

I myself worked in the fire protection industry for over 20 years. This only further cemented my awareness of fire safety.

Although I’m usually a very shy person and hate to draw attention to myself, my children have witnessed many times where I called a retail establishment out on a blatant fire safety issue.

I was astonished once when a restaurant lazily stacked highchairs in front of the fire exits. So I requested that they move them. But they moved them a couple of feet to the right to block only HALF of the fire-exit door!

So I requested they move them completely away from the exit. The servers were beyond irritated that I would dare to make such a request, requiring them to go further to retrieve a highchair when one of their guests required one.

Oh if only they had seen that picture…

Once while traveling my brother decided he should test the smoke detector in the fancy-schmancy Bed & Breakfast where he & his wife were staying. (Oh yes, I’m so proud he thought to do this…)

He had to get something long enough to reach the button on the ceiling-mounted smoke detector. 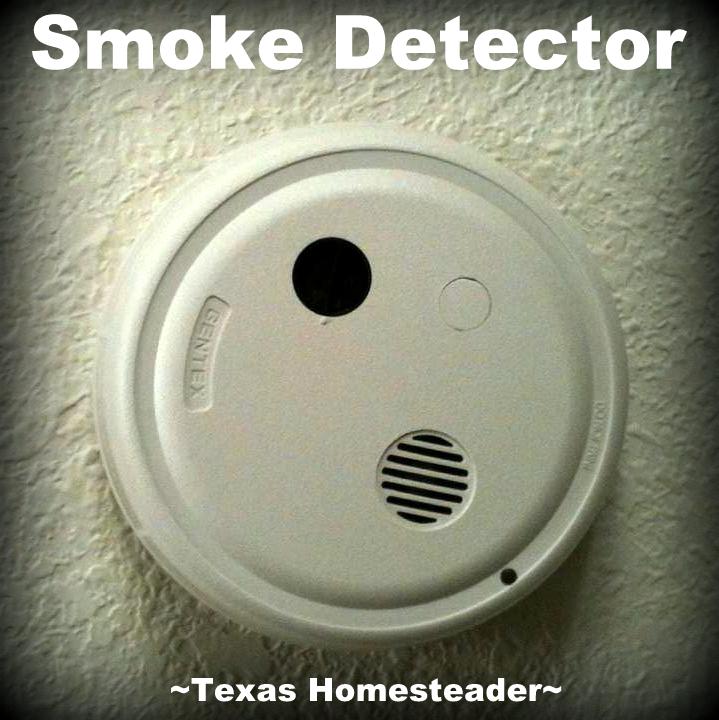 But when he pressed the button there was no response. Upon further investigation he discovered that it didn’t even have batteries in it!

That false illusion of fire safety is not protecting anyone. And the laziness or cheapness of not replacing that battery is not worth a human life.

If only that B&B owner had seen the picture…

OK, once while staying in a hotel I requested RancherMan to check the smoke detector in our room. When he did the alarm went off and the fire department was automatically dialed.

Although thankfully the emergency call was canceled before the firefighters actually hit their trucks, you definitely want to make management aware of your request before you test. OOPS!

And what about this! Last week we were enjoying a special celebration dinner at a very well-known restaurant. The server seated us close to the fire exit & THIS is what I saw! 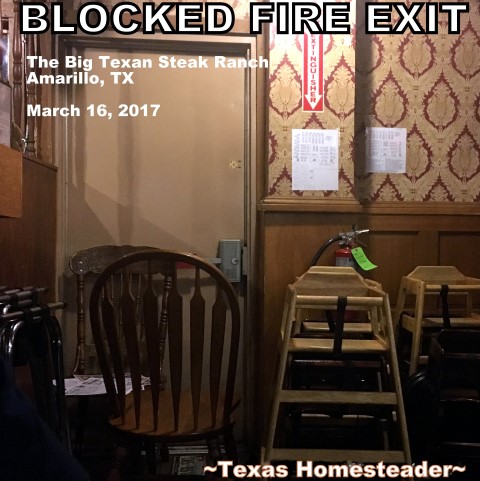 Why, to even reach the fire extinguisher you’d have to climb several high chairs stacked 2-3 high and somehow shove them out of the way to retrieve it!

Oh, if those servers had only seen that picture…

Typically I’ll go straight to management & ask that they remove the blockage immediately. But not wanting to embarrass our dinner guests, I instead took pictures. I forwarded them that very night to the fire marshal of that city.

When I didn’t hear back from him I sent the Fire Marshal a follow-up email asking if there had been any action taken. I restated my wish to be informed of any updates. He finally responded to my email:
“I conducted an on-site inspection at the location and I spoke with one of the managers. I informed him of my concern and he and I walked the dining area together. At this time we were not able to identify any blocked exits. However, I showed him the photo that you sent to us and he stated that he would make sure that all exits remain unobstructed”

This awareness is all I can really hope for. BUT, if y’all see something similar in a restaurant or other public location – speak out! Awareness is key!

I will say that in subsequent visits to this restaurant I was very pleased to see the fire exits remained unobstructed. The managers are training their personnel about fire safety, and that makes me happy. Especially since I really enjoy this restaurant.

Like the fly that insists on landing on your nose over & over again until you become irritated enough to take action, I’ve got plenty of ammunition to work with.

And dammit, I’ve seen the picture!

I’ll be speaking with managers of businesses that have one of their doors locked and ask them to unlock all of their public access doors for the safety of their patrons.

And I’ll certainly take notice & demand that the fire exits remain unobstructed at every public establishment I visit.

And If I feel there’s a fire safety issue that’s not being addressed I’ll contact my fire department or my County Fire Marshal’s Office and have them swing by & chat with them. I hope you’ll do the same.

Rant over.  (turns off light & drags soapbox off stage left…)