How do you keep the spark in a relationship? I think once you get past the brand-newness of any relationship, there’s often a shift. Not in a bad way, but in a way that requires each of you to work at the relationship to keep it strong.

Now I realize that each personality is different and what works for some won’t work for others.  But I thought I’d share a little about how RancherMan & I stay in the newlywed phase of our marriage even though we’ve already surpassed our 20th wedding anniversary. 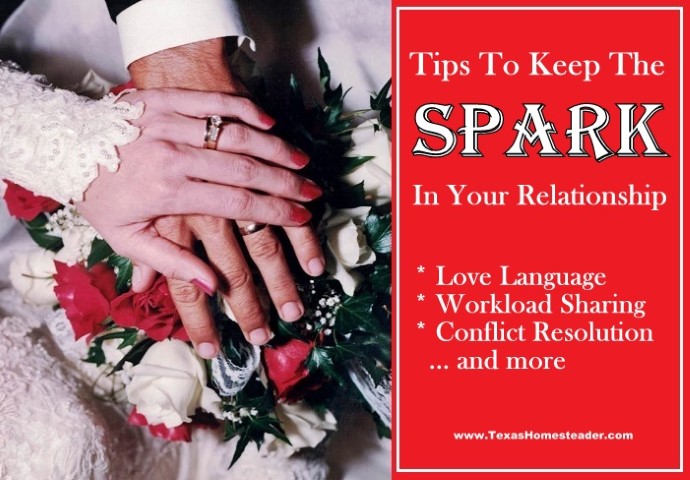 Those who know us personally often refer to RancherMan & me as newlyweds. And I guess it’s true, I do still get a little tickle-in-my-tummy feeling just from seeing that oh-so-handsome man of mine.

We are always holding hands or touching lightly on the arm because we just wanna be that close.

And you know how some folks are afraid of spending a little too MUCH time together?  Nah, that’s not us. We actually prefer to be together.

To me, serving each other and putting the other first is a huge deal.  There are a thousand different ways in a typical day we serve each other.

For instance, RancherMan often awakes before me. And when he does he closes the door to keep things dark & quiet in the bedroom so as not to awaken me.

He sneaks into the kitchen and makes the coffee and pours a cup for me. So each & every morning that he is up before me, there’s a hot steaming cup of coffee on the night table next to the bed the moment my eyes open. He’s done that from day one. It’s just a tiny way he serves me.

And if he’s out in the pastures on a hot summer day and I see him heading toward the house, I’ll hurriedly grab his insulated tumbler, fill it with Ice & filtered water & set it on the counter for him.

That way he can have a cooling drink the moment he steps inside. It’s a tiny way I serve him.

There are so many other things too. RancherMan always (and I mean ALWAYS) opens my door for me. Even when it’s cold, or raining, or hot.

Yes I’m perfectly capable of opening my own car door. But it’s a small way he serves me.

And at night I typically take the first shower. But when I get out of the shower I lay his towel out for him in preparation for his shower.

And  when we’re getting ready for bed, I load up my toothbrush with toothpaste, then I load up RancherMan’s toothbrush too and set it next to the sink. It’s ready & waiting for him.

Tiny? Yes. But representative of one of the many small ways we find to serve each other every day.

We’re constantly starting our sentences with “Could I bring you …” or “Would you like …”  Whatever we can do to put the other first and serve them, we do.

And who doesn’t love feeling that important to someone? I think that’s paramount in importance in our relationship. It’s Rule #1: We each put each other first and ourselves last.

Although I don’t believe RancherMan & I have ever had an actual fight (yes, really) we don’t always see eye to eye.

Ya know, when you’re self employed each of you have a hand in the same job to earn the money required to run your household. And sometimes the visions on each side don’t match exactly.

RancherMan & I have certainly had our differences of opinion. Sometimes polar opposites!

I mean, we’re not the same person – we’re gonna think differently sometimes. Here’s the way we work that out.

Each of us listens to the other’s point of view. And not just plotting out our response but really listening.

Then the other partner has an opportunity to voice their point of view. If there’s just no meeting in the middle, RancherMan & I typically decide whose way of thinking matters to them the most.

Sometimes for one of us it’s just a preference to do something one way while for the other it’s much more important in this case to do it their way instead.

But it’s never a power struggle where we want to win just to say we won! Of course it helps that our #1 goal is to serve each other, so we never get into a battle of will.

This is important too. When differences of opinion are being discussed, it’s easy for a passionate point of view to alter our tone.

But we each remember that our tone of voice and the words we choose when speaking with each other can either be beneficial or counterproductive.

Think about how you would you feel if aggressive words or tone of voice were being aimed at you. Attacked, right? Even if that wasn’t the intention.

But doesn’t that just put you immediately on the defensive? Who’s gonna benefit with that? My guess is neither side.  I guarantee your partner feels the same.

The words we use (and yes, even tone of voice) are important when dealing with differences. There’s no quicker way to turn the other side to deaf ears than an aggressive ‘My way or nothing’ speech.

You’re partners. Speaking kindly to each other even during an impassioned conversation goes a long way in getting your opinion heard & understood.

Sometimes I write love notes to RancherMan using soap on the bathroom mirror. Or I write a quick note & tuck it into his coat pocket where he’ll find it some other time. It’s just a short & sweet way to let him know I still think he’s da bomb.

And when he’s out in his hunting stand watching a gorgeous sunset, he’ll text a photo of it along with a love note to me. Or maybe he’ll text a sweet sentiment about how he misses me as he’s sitting in a meeting somewhere.

I think it’s easy to get caught up in the day-to-day and take your partner for granted. These tiny little languages of love lets your partner know you’re thinking about them. 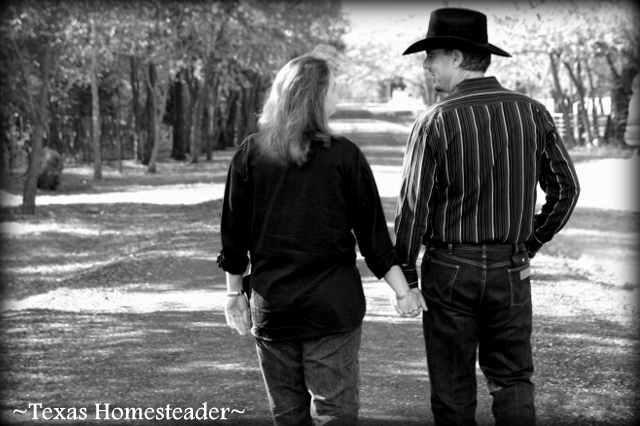 To keep from feeling unbalanced with the workload, we partner up with them. For the most part, we don’t have specific his & hers chores.

Yes, he typically mows the grass and I typically tend to the garden. But our chores are often done side-by-side and are pretty evenly split.

When it’s time to prepare supper, he’s almost always in the kitchen with me dicing, slicing or cooking. And when supper’s done we’re both in the kitchen cleaning up the dishes.

On laundry day he’s loading up the washing machine & hanging out the laundry just the same as me, often side-by-side.

On the flip side when it’s time to work the cows or mow the pastures, we’re both tasked with those chores too. I’ll spend hours bouncing around the pastures on my tractor mowing or dealing with pasture weeds or fixing fences the same as he does. Again, often side-by-side.

Having both of us involved equally in the chores means no one is left feeling like they do all the drudgery work. I mean, many hands make light work #amiright? Plus I think we just like being together, so there’s that… 😀

So there ya have it. It’s just a few of the ways that RancherMan & I have enjoyed many years of wedded bliss so far, with many, MANY more to come. 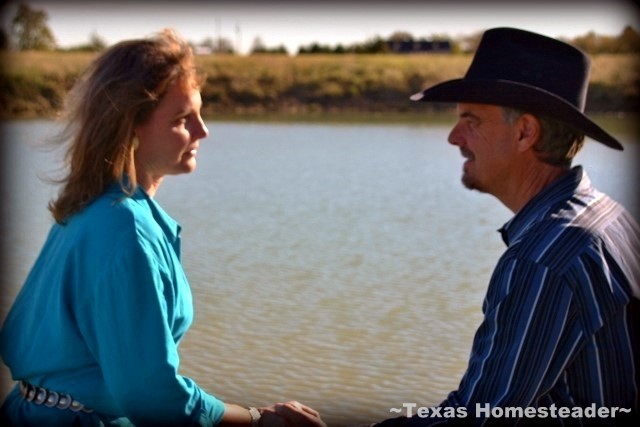