I usually make plans for the day and work towards implementing them to keep things running smoothly. And then things change. Wanna see what a day on our Texas Homestead is like?

I’d already made all the preparations for my homemade Chicken & Dumplings supper. The cooked chicken was pulled from the freezer and the dumpling dough made in advance & stored in the fridge. Heck even the Homemade Broth was made & canned weeks ago. So all my advance preparations meant that supper tonight would be quick & easy. But then… 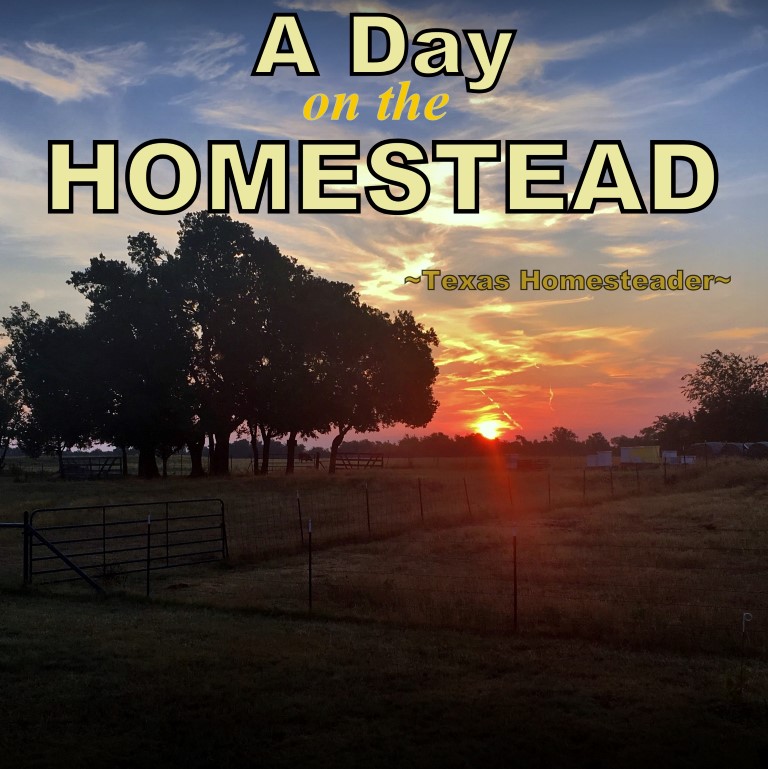 First, a little background… A young first-calving heifer was due to have her very first calf. So several days ago we moved her to the ‘maternity ward’ to keep a closer eye on her. Then she began showing the beginning signs of labor.

So we moved her once again, this time to a small paddock close to the house. This would allow us to monitor her constantly but from beyond her view. We don’t want to make her nervous, but we need to make sure she’s ok.

We watched as her labor progressed. It seemed to take forever to see any progress. But finally we saw the baby’s hooves making their first appearance. We noted that there were two hooves showing and they were pointing correctly. This tells us the calf is in all probability aligned correctly in the birth canal. Whew! One worry eased… And the size of the hooves wasn’t overly large so we were hopeful things would continue to progress. And they did – albeit slowly.

After over an hour of labor we finally saw the calf born. Then we watched the new mom’s interaction with her baby. But as a first-calving heifer, she was confused as to her role here. The sun was in the western sky by now and the breezes were chilly. Although RancherMan & I like to leave this important initial bonding step to the dam and new calf, now it’s time to step in and offer assistance. Time was running out.

Our cattle are Herefords, known for their docility. RancherMan & I are the only two working with our cattle. So for our safety and the safety of our other cattle, we don’t tolerate flighty or excitable animals.

And most importantly, we walk among and care for our herd daily. They know us to be the good guys and they don’t fear us. They know we’re gentle and mindful caregivers.

So although we still exercise caution, we’re typically able to be present for each calf’s birth. Oftentimes just 10-20 yards away yet as out of sight as we can make ourselves for the comfort of the new mama. The dams typically allow us to weigh and tag the baby for our calving records within the hour.

From what I understand this is not possible for most herds where new dams can be aggressive and dangerous. So I’m not advocating this for other cattlemen. Know your animals before attempting to get close to a newborn calf!

RancherMan & I bundled in coats, gloves & mud boots and went out to the paddock. The baby was laid out flat. She was still covered in fluid, eyes rolled back and shivering violently. Oh no!

We gently guided the mama back to the baby, trying to get her to clean the newborn calf. That would help them bond and also stimulate the baby to get up & nurse. Then we stepped back out of the way to observe.

But the new dam was only half-heartedly licking the baby, not really sure what to do. Soon she began to walk off again to graze.

Taking Steps To Help The Calf

So we rolled the calf over to get her feet under her and vigorously rubbed her shoulders and neck with our jersey-gloved hands. This was to emulate the mother’s licking, and it seemed to work. The calf reacted to it & although she still didn’t attempt to stand she started appearing more alert.

The now more-alert calf attracted the attention of her unsure mother and she again began licking on the calf. And again we stood back to observe. But soon the dam lost interest and started to walk away, obviously more interested in grazing than her new baby.

RancherMan & I calmly led the mama back to the baby and repeated the vigorous rubbing of the calves’ shoulders & neck. But still the baby did not want to get up & nurse. She was cold and confused.

Running Out Of Time

We know how important that first meal of colostrum is for the calf. Especially when the weather’s cold. And with nightfall approaching we knew that she needed that colostrum quickly. The sun was starting to go down and soon it would be dark. And much COLDER!

We needed to get that mama to bond with her calf. To accept, feed and protect her. And we needed that calf to get up and nurse. Her health both now as well as way into the future would depend on it.

So RancherMan & I attempted to pick up the calf and get her feet under her. But her legs were all newborn-wobbly so it was difficult for her to stand. We can’t give up, we had to try again.

So once again we positioned her legs beneath her & stood her up, RancherMan straddled the calf to keep her upright while I guided the calf’s mouth to her dam’s udder.

Although the calf initially took a teat, she didn’t really nurse because she was still cold & confused. So RancherMan stood there holding her up with his legs as I worked to get the calf to understand that this was her first oh-so-important meal.

With all of this going on, it began to click with the young, inexperienced mom that this was her baby. Her maternal instincts began to kick in. And as she stood still waiting to be nursed, she started licking on and creating that important bond with her calf. The licking invigorated the calf to finally stand on her own and nurse heartily.

A Hard Night For Us

RancherMan and I were now chilled to the bone & covered in mud and afterbirth. But we were happy that the baby & mama were going to be just fine. As we came into the house, I dropped my wet, muddy, dirty clothes, gloves, jacket etc right into the washing machine and went in to take a hot shower – both to wash up as well as to WARM up!

RancherMan had already showered so he called for a pizza. (Thankfully our local small-town grocery store has a pizza oven service!) It was ready to be picked up by the time I emerged from the shower.

So tonight we enjoyed pizza and celebratory brews as we relished in the wonder of new life here on our Homestead. The chicken & dumplings will be on the menu tomorrow instead, but tonight we’re totally spent and so thankful for the pizza option.

All Is Not Always Beautiful

Life here is blissful have no doubt. But it can be dirty, muddy, hard and sad too. We’ve had to accept loss & heartache. We’ve lost mamas & we’ve lost calves. And we’ve suffered financial hardship and had to make hard adjustments when things didn’t turn out as we’d planned.

But to be honest, more often than not we’re relishing in joy. The joy of healthy, happy animals. Joy in a nourishing garden or vibrant beehives all bursting with abundance. And joy that this life we live is lived together, side-by-side. RancherMan & me living a life we’ve fashioned for ourselves at a place we love. And that’s one of the greatest joys of all. 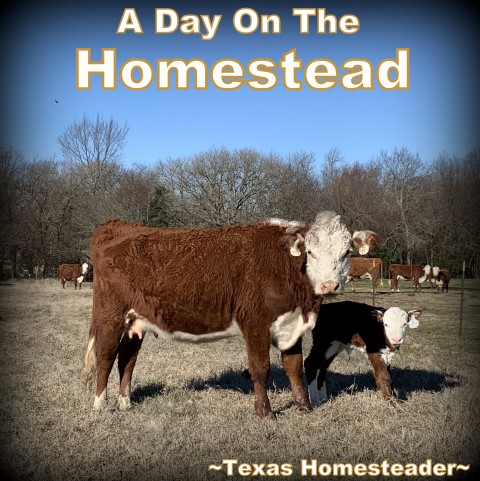 2 thoughts on “A Day on the Homestead: New Calf Needs Our Help!”