When we moved to the country we discovered TV reception was poor at best. But we didn’t resort to a monthly cable bill – see all the ways we easily enjoy television entertainment! 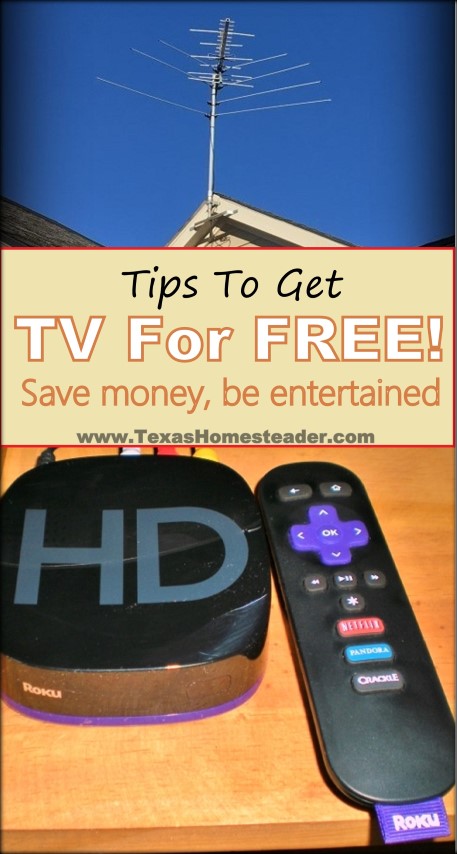 (Note: Some links in this post are for further information from earlier posts I’ve written.  But links preceded with * are affiliate links.  If you click them and buy something (almost anything, not just the item noted) I could receive a small commission.  But the price you pay will NOT change.  It’s an easy way to support this blog without anything coming out of your pocket.  So click often!  Thank you!)

One of my pet peeves is paying for something that used to be free. When we moved to the country one thing we discovered was that TV reception was poor at best.

Everyone told us we would have to get a cable or satellite subscription if we wanted to watch TV. As you can guess I immediately went on a mission to defeat that issue.

When we lived in the city we had an antenna

in the attic that provided excellent reception. That was before digital TV.

But once we moved here we were able to get acceptable reception with the same set-up.

Raising The Height Of The Rooftop Antenna

We tried mounting the antenna as high in the attic as possible. But it was very unreliable. Partially due to our solar decking in the attic blocking the signal.

I contacted a local TV service company who reported they could install an antenna on a 30′ mast and run the necessary cables for $600.

Heck $600 will get several months of cable TV! We almost caved in right then and there and subscribed to cable.

But we decided if raising the antenna was the problem we would mount it as high on the roof as possible.

After installing the proper bracket and pole to the peak of the roof and properly grounding against lightning we were able to get the antenna about 25 feet high. (our roof peek is about 20 feet high and the pole is another 5 feet higher) 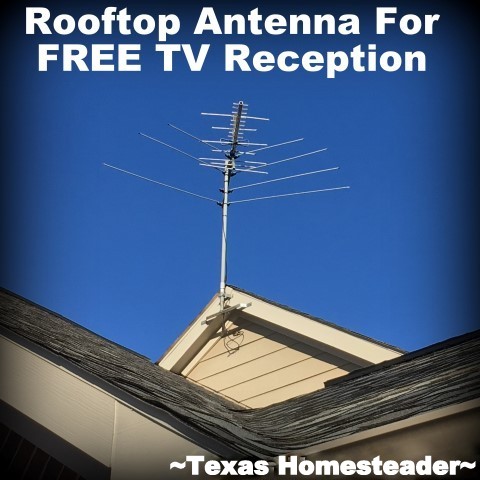 How To Position Antenna For Best Reception

Once the antenna was up in the air and clear of our solar decking, the reception improved dramatically. RancherMan then went online and found the list of FCC DTV Station Maps.

Using a compass he pointed the antenna exactly where it needed to be to get the strongest signal from the closest stations.

We live approximately 75 miles from the Dallas towers, which is considered the fringe area. That means all of our station signals are weak.

But then there was the issue of signal strength and this proved much more difficult a problem to solve. As you all know the digital signal is weaker and much more finicky than the old analog signal. But we refused to give up. 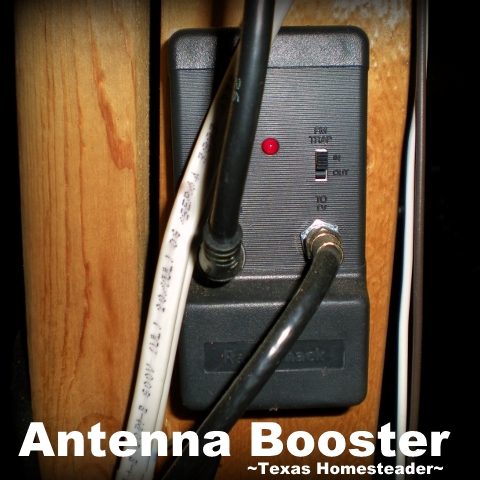 So we installed a *Power booster on the antenna. This helped our antenna reception substantially.

Streaming Shows & Movies To Your Television

We watch television via our antenna often. But as you know, broadcast TV is oftentimes less than tolerable now days.

Cable and satellite offer many more television entertainment options through many more channels. But as you know, a huge percentage of those channels are either repetitive or of little interest to many people.

Thankfully it’s easy stream movies & shows from the internet to your television using: 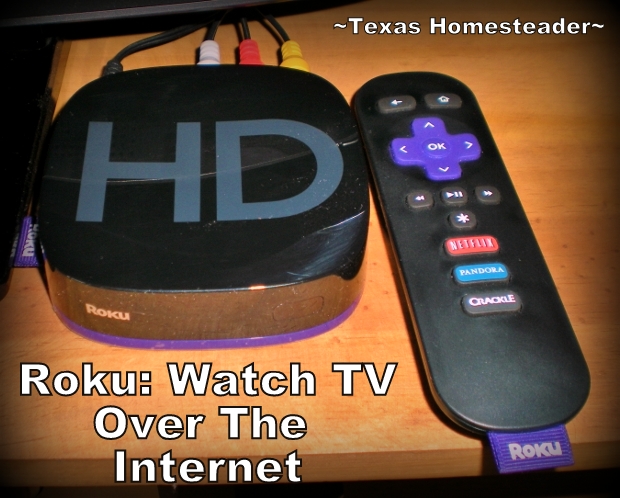 We have DSL internet and a wireless modem. So this is better than cable and is a one time purchase.

The Roku gives us access to hundreds of free internet-based channels, including movies.

Now don’t confuse this with cable. There are no “live” broadcasts through this device. But news is still broadcast after the fact through Roku. And countless shows are available on a replay basis.

One of my favorite Roku channels is Crackle. It’s essentially Netflix with a 30 second commercial every 20 minutes or so. And it is absolutely FREE.

There are also home improvement channels as well as cooking, DIY, documentaries, old movies and cartoon channels. And guys, there are hunting and fishing channels too.

Chrome Cast To Mirror Your Computer To Your TV

RancherMan loves his *ChromeCast. It’s just a small thumb drive-looking device that plugs into the TV.

But ChromeCast doesn’t work with Apple IOS and we have Apple tablets. So he’s also looking into an *Airplay dongle to be able to mirror our Apple Tablets to our Apple TV too.

We love Amazon Prime for free shipping. But your prime account also allows you to stream shows & movies. So we enjoy that feature often. I mean we’ve already paid for Prime – why not use all the benefits??

Plus there’s an added benefit of no commercials while we’re streaming many shows & sitcoms. That’s especially handy during the holidays when the same ole “If you loved her you’d buy her a truck for Christmas” commercials play over & over again!

Lately we’ve been streaming the Andy Griffith Show in the evenings – aaaahhhh, it was a simpler time for sure. And a nice way to wind down after a busy day.

And y’all – you can try *Amazon Prime For FREE!

So it might be a good way to see what all is available through them. And take advantage of that free shipping and streaming music too!

So if you live in a rural area don’t give up on affordable TV.  And if you live in the city, still look into the Roku, AppleTV, ChromeCast and Amazon Prime options.  Cut that cable bill – your bank account will love you.

*See ALL Our Frugality Articles*

* Affiliate Links – We are currently enrolled as an Amazon Affiliate (others could be added in the future) Occasionally I will insert an affiliate link into one of my posts if I think it may be of interest to you. If you click on one of those links and buy something (almost anything, not just what was linked) I get a small referral percentage from them – the price you pay for those items is UNCHANGED.

When you buy something through the affiliate link it’s a great way to support this blog without anything coming out of your pocket so click often!