If you’ve been following our Beekeeping Series, you’ll know we’ve already discussed preparation steps before you ever get your bees, then the steps needed when you actually receive your bees and even another post about internal hive inspections needed periodically.  (I’ve added links to all of those posts below)

But now you have your bees, you’ve kept up your periodical hive inspection and are wondering if you need to give your bees room to expand.

So today we’re talking about how to tell when it’s time to expand the hive. 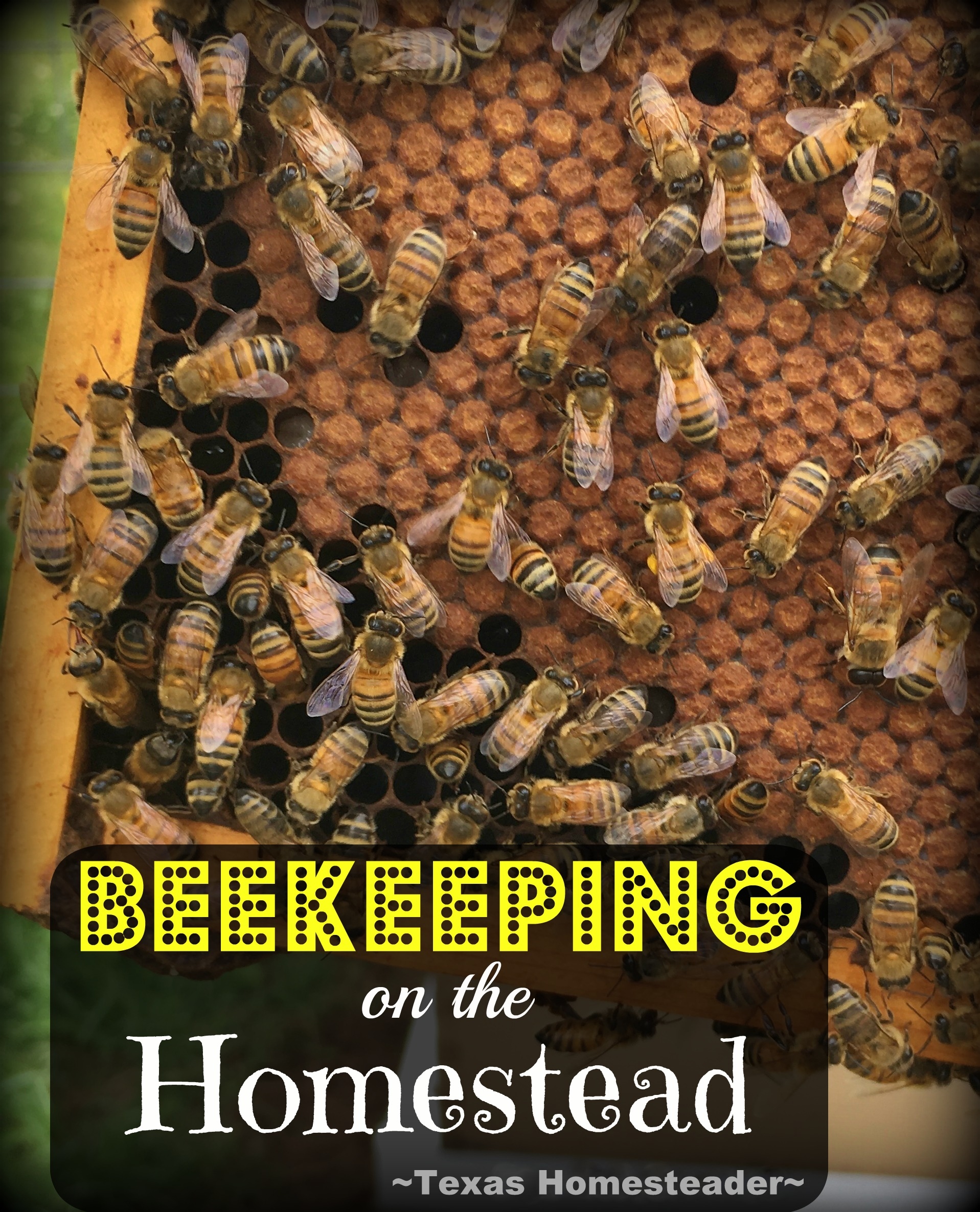 RancherMan & I are raising our own colonies of bees using the popular Langstroth hive.

Before we ever got our first bees we attended seminars & joined a local beekeepers association to surround ourselves with those that have already learned the ropes.

One important thing we’ve learned is that if the bees fill too much of their available frames with brood and honey, they’ll often go looking for a place to expand by taking their queen & swarming away into the wild blue yonder!

As a beekeeper you want to avoid this since their swarming means you’re losing the bees you’ve purchased and nurtured this far along.

This is one important reason it’s vital to inspect the inside of your hives periodically. You’re checking the health & vitality of the hive, whether or not you see common pests and how many frames the bees have filled so far.

When Is It Time To Expand The Hive?

When you observe that the bees have filled approximately 80% of their available frames you want to add another deep box with frames to give them room to expand. This box is open on both the top & bottom so the bees will naturally migrate upward and start working on those available frames.

Not only does this step help keep your bees from swarming away, but it also builds your hive: More space + more frames = more bees & more HONEY!

To do a simple Walk-Away Split you’ll simply remove the top cover & telescoping lid on the top box, add this new deep box and frames and replace the covers to the top.

(Note: Although the walk-away split is by far the easiest, RancherMan & I typically do a Frame-Swap Split giving each split colony a number of frames of comb, brood and honey. Either way, up to you!) 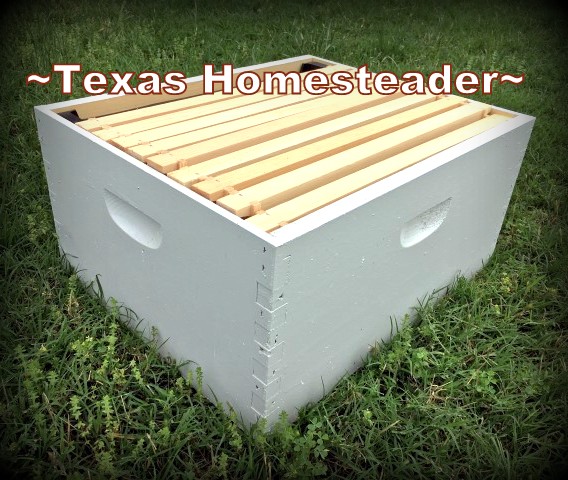 During the last inspection RancherMan noticed that we approached the 80% full threshold so we made plans to expand the hives today. We waited until mid afternoon when the bees would be most active in their foraging and hopefully fewer bees would actually be present in the hives.

We’ve been warned time & time again to NEVER deal with the hives without at least a protective beekeeper’s veil to protect your eyes. So we suited up with our veils and gloves, long sleeved white shirts over a tucked in t-shirt, heavy denim jeans and boots. And out to the hives we went.

RancherMan smoked the entrance of the hive first to distract the bees. Then he removed the cover and the top.

Using his hive tool he loosened the first frame on the edge of the hive box and gently removed it for inspection. Bees typically work from the center of the hive outward so this gives us an idea of how full the frames were.

This last frame looked to be about 90% full on one side and they had just started working on the other side.  Perfect!

While we were inspecting the hive, we were taking notice of the contents of the frames as well. The bees will usually fill in their frames in a semi-circle, arching to the top of the frame and back down again.

The middle of the frames will typically be brood cells where the queen lays the eggs and the workers tend to the brood. These cells have already been capped and these new bees are well on their way to being born. 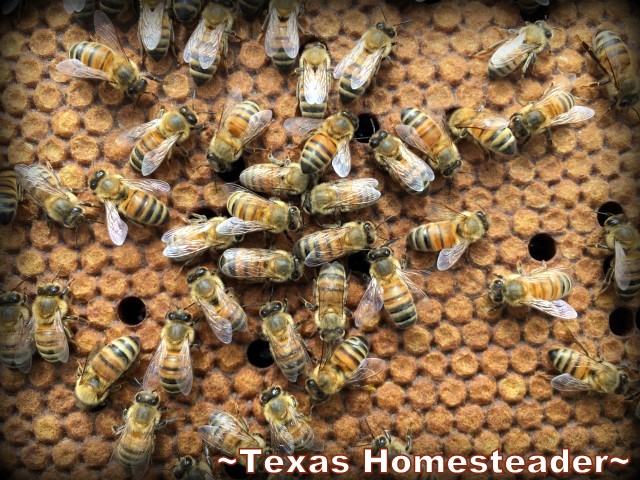 The top corners are where the bees will typically store their honey reserves. The capped honey is easy to tell from the capped brood as it looks different than the brood, as you can tell.

The honey cells are waxy, not papery like the brood cells are. This honey is stored to be used to feed the hive. 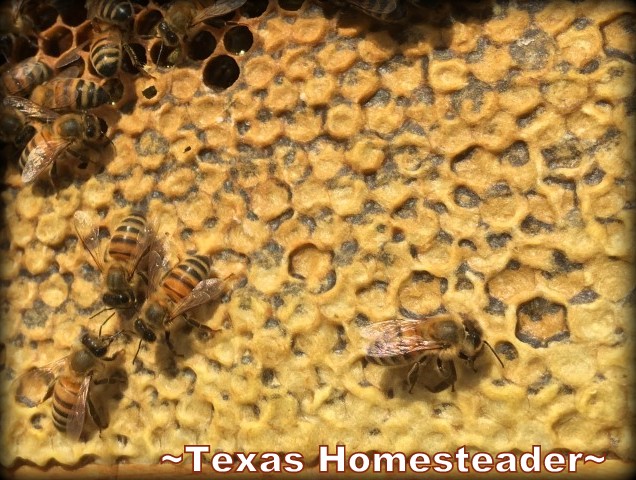 Looking For The Queen Bee

He also pulled a couple more frames and inspected them as well. He was hoping he could lay his eyes on the queen.

Although I didn’t snap the picture before she began moving out of the frame, this picture shows the difference between the queen bee and a worker bee.

You’ll notice the queen is more solidly colored and noticeably longer. She’s pretty easy to spot in the hive even with all the bees buzzing around! 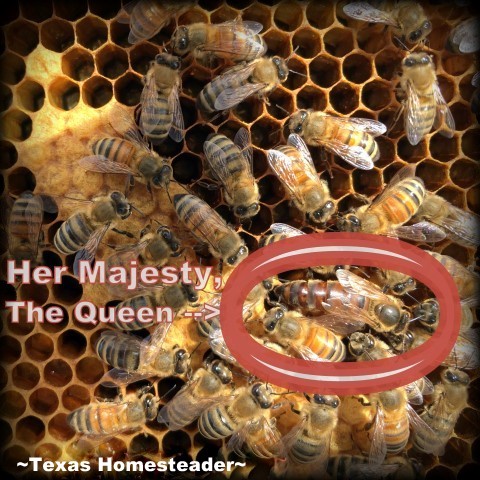 Adding Boxes To Expand The Hive

Now that the inspection of the hive has been done, it’s time to add a deep box to the hive. This deep box has 9 frames plus an internal feeder. The feeder has been filled with 1 part sugar, 1 part water.

We felt it was beneficial to add the feed, and 1×1 encourages them to draw out the comb.

So we grabbed the prepared boxes we brought to the hive with us and RancherMan smoked the hive again to distract the bees. He brushed away any that were on the top edges and carefully sat the expansion box atop the previous hive box.

Now he replaced the top and the roof of the hive. He repeated this process with the other hives, then he strapped the box tops back down and we left them to attend to their bee bzzzzness! 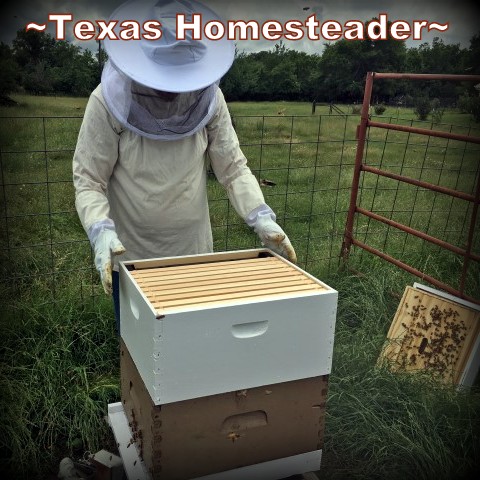 Once we were back inside, I got busy downloading a kabazillion pictures I’d taken and RancherMan updated his beekeeping journal. He wants to keep tabs on when he did things to the hives and what he observed during inspections and expansions:

We’ll inspect them in a couple of weeks to see how they’re doing with their new diggs.

8 thoughts on “Beginning Beekeeping: Knowing When To Expand The Hive”