Hobby Beekeeping is enjoying quite a popular resurgence. Many people are becoming interested in raising their own bees, whether for pollination of their own gardens, that delicious honey, valuable beeswax or just to care for our beloved pollinators.

Today I’ll be talking about requeening our hive. There are many reasons a beekeeper might want to requeen their hives. Maybe their existing queen is older and not productive anymore. Or maybe over the years the bees in the hive have swarmed and requeened their colony so many times the hive is becoming more aggressive, or ‘hot’.

You see, each time the colony makes their own queen, she must make her maiden flight for breeding with the surrounding bees. Oftentimes those are wild bees and some might even have more aggressive Africanized bee influence.

If you have very many generations taking those steps you’ve gotten too much opportunity for aggressive characteristics to be introduced into your hive.

4 Reasons To Requeen A Beehive

Drawbacks To Requeening Your Beehive

We ordered mated Italian/Carniolan cross queens in December. They’re supposed to be a great species combination of calm and high production honeybees, extremely gentle toward beekeepers and able to defend themselves against insect pests.

As it gets closer to time for us to pick up our new queens in the spring, we’ll first need to find and remove the existing queen 24 hours before the new queens are installed.

Honeybee colonies won’t tolerate two queens in a hive. One of the queens will have to kill the other; you sure don’t want that after you’ve spent so much money purchasing your queens!

We’re planning on doing a split of this double-deep hive with a new queen in each split. That way each of these new queens will have a hive of their own. 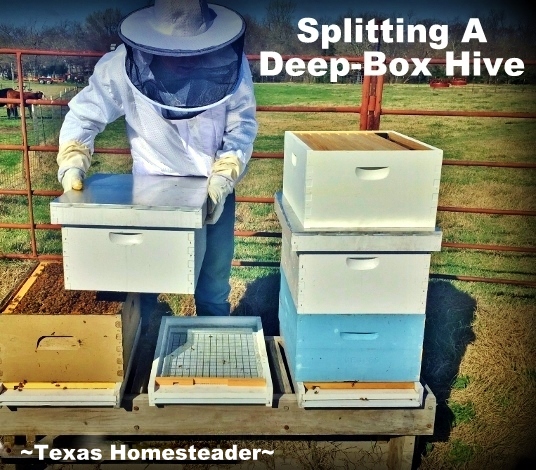 We’ll opt for the Frame-Swap Split method instead of the quicker & easier Walk-Away Split since we have to locate the existing queen anyway.

Trying to look frame-by-frame for the queen, well it can be a little cramped pulling and returning full frames of bustling bees. Since we’ll be splitting the hive anyway, here’s what we did to more easily locate our existing queen while performing a hive split at the same time.

We first set up a bottom board topped with an empty deep hive box next to our existing hive. Then we pulled a bee-filled frame from the existing hive and looked carefully on both sides for the queen. If she wasn’t on that frame we placed the now-inspected frame into the adjoining empty hive box. 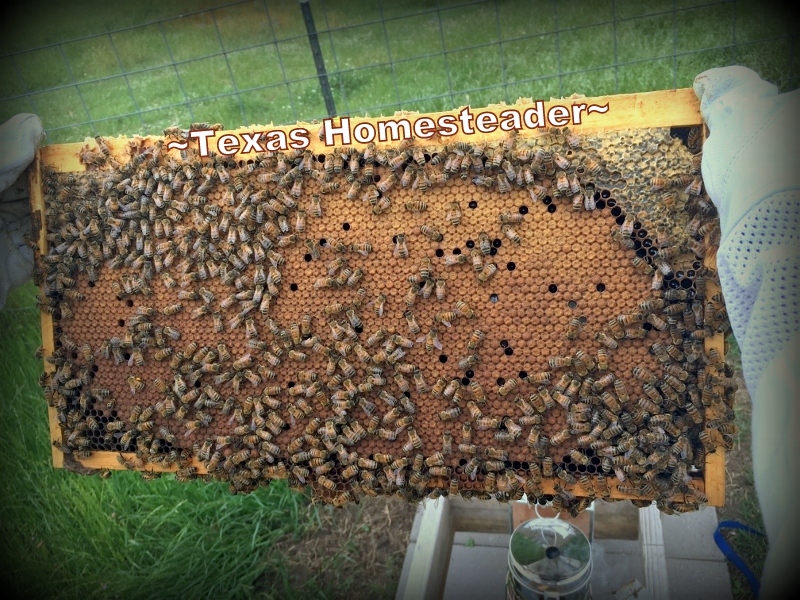 Then we continued looking for the queen on the remaining frames. When she was removed from the hive we pushed all filled frames to the middle of the hive box & added empty frames on the outside empty spaces the same as we’d done with the empty hive box before.

That way you’ll have 2 double-deep hive boxes for each hive with expansion room in each hive box. And it makes and it much easier to see which frames you’d already inspected and which need to still be inspected. Plus we’ve basically completed a simple frame-swap split at the same time.

Picking Up Our New Honeybee Queens

We picked up our new queens the first week of April and they were presented in wood/wire boxes complete with a couple of nurse bees to accompany the queen. 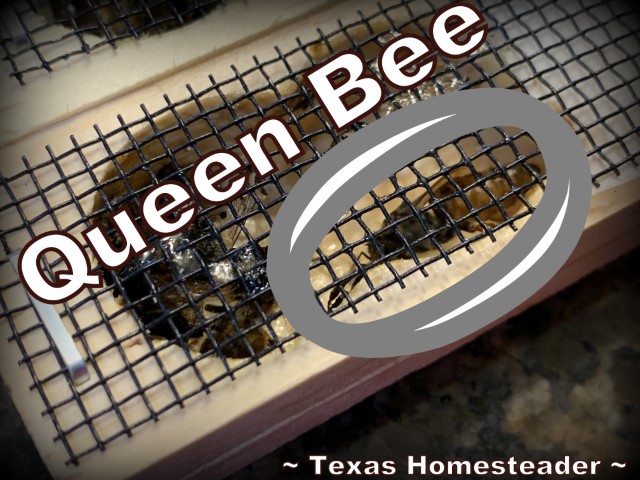 We were disappointed that the queens weren’t marked as the ad indicated they would be. It would be SIGNIFICANTLY easier to locate the queen in a bustling hive of thousands of bees if she were marked.

So we bought a *bee-marking kit so we can do this ourselves when we get into the hive to inspect it. 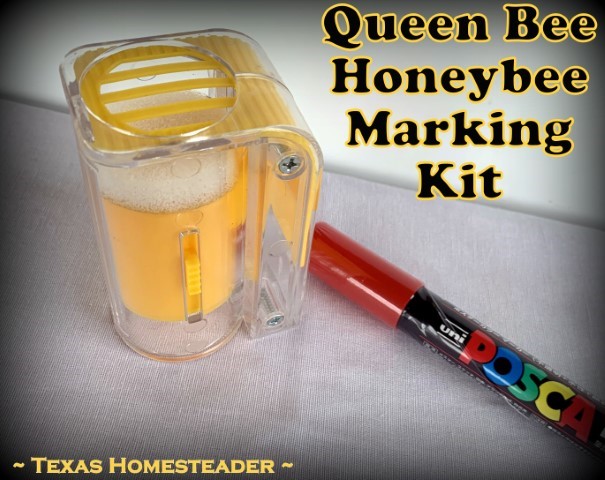 Some Things We Had To Learn On Our Own:

When we ordered the queens several months ago we weren’t told of any advance steps we needed to take before installing our new queens, or how installing the new queen would work.

Thank goodness RancherMan’s a research king. So he discovered these points we needed to know – hopefully they’ll help you too:

The bees in the hive will realize they’re queenless in a couple of hours. Then they start trying to choose an egg to produce a queen. But having the queen removed 24 hours prior increases the chances that your new queen will be accepted by the hive, as they’re looking for a new queen anyway.

Some beekeepers say you need to poke a hole in the candy to aid the bees in having a starting point in eating the candy. But many beekeepers have accidentally injured their queens doing this. So RancherMan & I opted to remove the cork plug and leave the candy for the bees to tackle themselves (they did a fine job of it)

Our queen was sold with 2-4 nurse bees. They will accompany her to the hive.

This will allow space for the requeening cage to be wedged between the frames when your new queen bee is introduced.

The hive’s honeybees will eat the ‘candy block’ that holds the queen in the cage in about 2-3 days to release the new queen bee.

If you’ve purchased a mated queen, she’s immediately ready to begin laying eggs as soon as she’s released – provided there’s comb prepared to receive the eggs. However it can take up to 7 days after she’s released to feel comfortable enough in her new digs to start laying eggs.

Inspecting The Hive After Requeening

Many beekeepers recommend giving the hive a week after requeening before checking inside to see if the queen has been released.

You’ll want to check on her at that time though, because sometimes the queen gets stuck in the cage for whatever reason and can’t get out. If that’s the case you’ll want to pop the wire and release her into the hive.

If during your first inspection you confirm she’s not in the cage, go ahead & inspect the hive & locate your queen if possible. (marking her if necessary for much easier location next time! Eh hemmmm…)

Also look for any freshly-laid eggs. Any previously-laid eggs from the prior queen will have grown into small larvae by that time. So any eggs you see will be from your new queen bee. 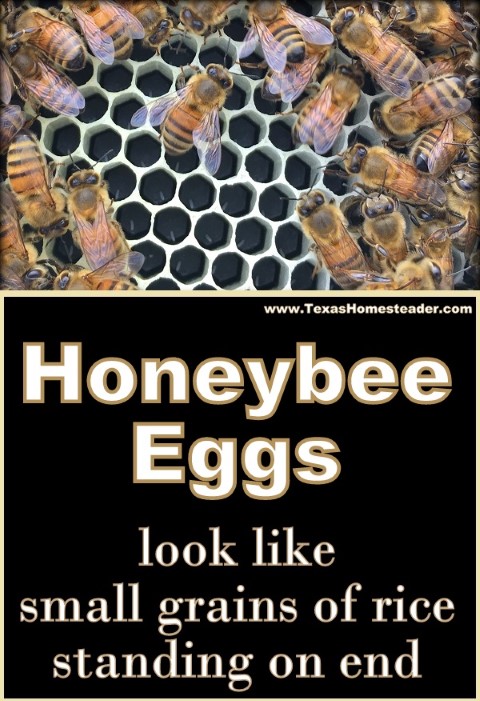 Some beekeepers like to look for and remove capped queen cells while they’re doing this first post-requeening inspection. That’s because they feel the colony might be trying to raise a queen of their own genetics. Those beekeepers fear that hive-raised queen could then hatch & kill their newly-purchased queen.

After the inspection is complete and the cage has been removed, don’t forget to tighten the frames back together before putting the lid back on the beehive.

Now that we’ve split our double-deep hive and requeened each of them, RancherMan & I are looking forward to a productive beekeeping season.