RancherMan & I love raising cattle, and we added chickens to the mix because they’re so much fun and, you know, EGGS!  But we were wondering what (if anything) we’d like to add to our current barnyard fun.  We’d tried raising goats but that just wasn’t for us. But then RancherMan hit on an idea:  How about BEES?

His thought is that bees will help keep the garden pollinated, and I’ll hopefully finally be able to obtain local honey that includes ragweed pollen to try to treat my allergies naturally. Sounds like fun – let’s jump in! We’ve never kept bees before so we’re NewBees!  (groaaaann, bad pun…) There’s a lot to do before we actually receive any bees, come see how we prepared. 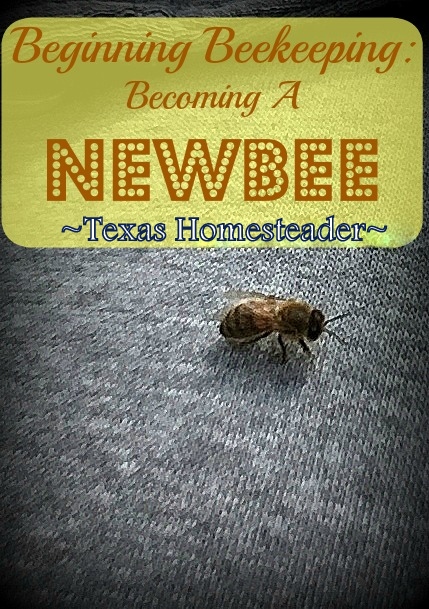 Of course RancherMan is the Research King. But even tireless internet researching does not take the place of actual hands-on experience. We started attending seminars, some that included a hands-on field day.

The field days were important learning tools for him. Not only did they allow him to see an active hive close up alongside the experts but he mentioned that being face-deep in an active hive is a whole different scenario and being that close to an active hive reassured him that he would be able to be calm in that situation without being nervous or edgy. We also joined a local beekeepers association and attended their monthly meetings – they were tremendously helpful for the NewBee. 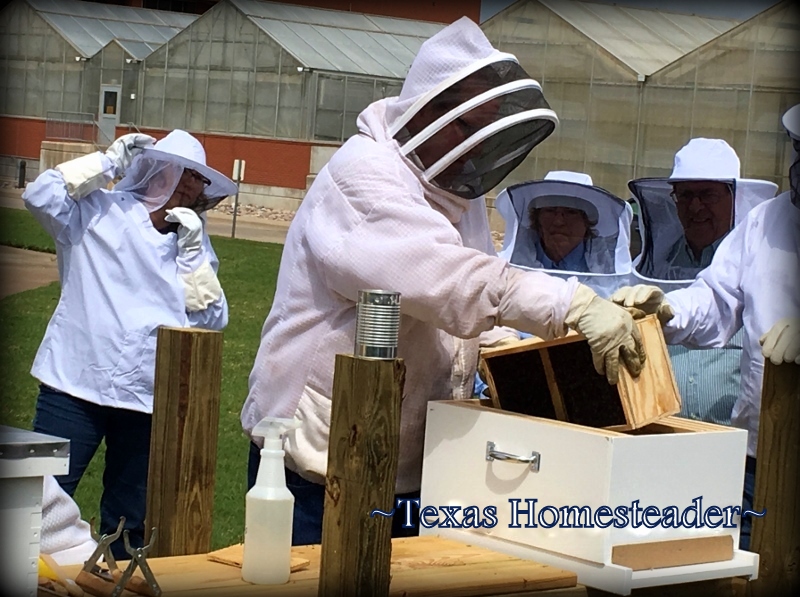 OK, so we’re sold. Let’s raise BEES! First we researched what equipment we’d need. Here are the supplies we purchased before ever receiving our bees:

The insides of the boxes were left natural but the outsides were first coated with linseed oil, and then painted with several coats of a high-quality oil-based paint and allowed to thoroughly dry.  The linseed oil is supposed to seal the wood before it’s painted. But we’re not sure it was absolutely necessary since we applied several coats of paint which would obviously seal the wood as well.

RancherMan used the hay forks on the front-end loader to paint all the way around them & allow them several hours to dry. LOL! We decided on white, but many beekeepers like to paint their hives in fun colors and we may very well try a fun color next time just to mix things up. 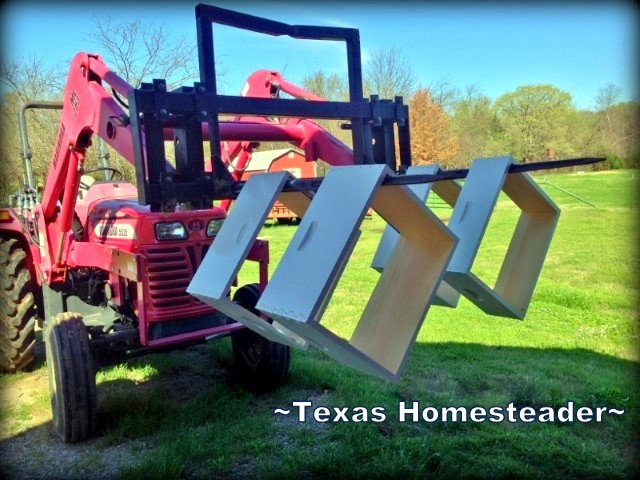 Deciding On A Proper Hive Site

We’ve been told it’s good to put your hives in full sun to help protect from hive beetles & Varroa mites, two major pests in the beekeeping world. We decided to place the hives in a pen we have fenced off for the cows about 50 yards from the house.

We chose that location because there are already 2 sides of the fence existing from the cow pen to form the corner of the bee pen. Plus it’s only about 50 yards from a tank (aka: pond) for the bees’ water source. And it’s an open area situated in full sun.

To keep the cattle out when they’re brought into the cattle pen we sectioned off the bee pen with 3 heavy temporary cattle panels. He drove steel pipe for support and installed the panels in a caddy-corner shape. When he wants to work the bees he can release the middle panel and walk through – plenty of space in & out!

Setting Up Your Hive Boxes

We learned that you don’t want the hives directly on the ground. Not only does soil contact deteriorate the wood of the hive boxes but it also makes the hives too accessible to insects and animals. Elevation as well as a screened bottom board will also offer ventilation of the hives during the heat of our typical Texas summers.

Many people set their hive boxes on a wooden pallet because they’re readily available, inexpensive and movable. But RancherMan wanted a higher frame for our hives for ease of handling. So he built a hive stand approximately 16″ tall and wide enough to accommodate 3 hives using repurposed 2×6 boards, bolting them securely together.

We’ll be starting out with two hives but the hive stand has room for one more stack of boxes should we decide to expand in the future.  (…and we WILL!) 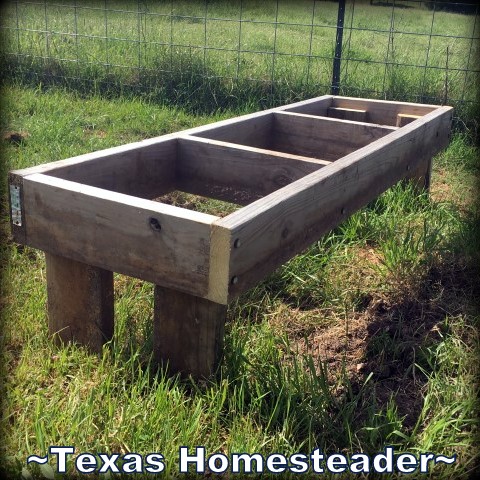 He prepared the ground by tilling the area where the bees would be kept to level the ground, then he purchased 8 flat 18″ pavestones for a solid 36×72 surface and added his hive stand. (UPDATE: This did NOT keep the grass from growing out of control here. We’re still looking for a solution)

Then because spring can bring volatile weather here in NE Texas, it’s common to endure 60-70 mph winds during our spring storms. RancherMan wanted to find a way to secure the hives

So he purchased two *screw-in pet anchors and installed them on the ends of the platform.  Then he will use a *12-ft *quick-release strap with s-hooks on the ends. He’ll hook the s-hooks of the strap into each anchor and tighten it over the hives. It’s easy to release the tension on the strap with a push of a lever when he wants to inspect the hives.

Now it’s time to consider buying bees. It’s best to contract for your bees in the fall so they’ll be yours in the spring. And it’s best to start with at least 2 hives so you will be able to compare the activity of both hives. It’s hard to ascertain whether a hive is acting normal if there’s nothing to compare it to.

Most people buy nucs or packaged bees, which are like established mini hives. We decided instead to purchase two full hives with their hive boxes from a local beekeeper. The reasons for this are:

Now that we’re ready to go, we’re excited to be finally getting our bees and start beekeeping.  Stay tuned for that post!