They were cute fuzzy things and so much fun to watch. As they grew we moved them to an enclosed *portable coop in the garage. Then we moved the coop out to the yard as it warmed up and they grew their feathers.

We used that coop as a mobile chicken tractor moving them to a different area each day for fresh grass. When they got a little older we moved them to the coop of our 1880’s barn and locked them in for a couple of weeks to help them realize this was their new home.

Since then we’ve let them out to free range every morning and we lock them securely back in the coop each night when they go in to roost. 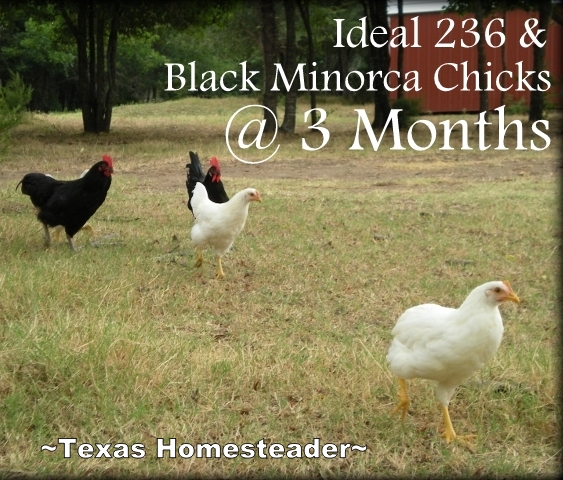 One morning when we opened the coop to let them out we were saddened to see something had slipped into the coop overnight and taken one of our Black Minorcas. Based on the evidence we assume it was a feral cat.

We strengthened our efforts to fortify the coop while still allowing proper air flow and we haven’t had a problem since.

I’ve noticed since our chickens began their pasture patrol each day we have very few grasshoppers or flies in the barn pasture or pens and the main runway of our barn is raked smooth by them every day as they scratch around.

I get so much joy from watching our little organic bug control employees out on patrol!  😉

Although we were virtually certain we had one rooster and one hen from the two remaining Black Minorcas, both appear to be roosters. One has been crowing for several weeks but the other one, much larger than the first, is just now beginning to crow as well (albeit not very well)

I read that sometimes a female can do some sad croaky crowing – does anyone know if this is true?

The rooster’s tail feathers have always grown upward, drooping only slightly as he grew. What we first thought was the larger female’s tail feathers were very different and grew straight back, although now they’re growing long enough to droop downward.

The Ideal 236 chickens are growing well, but as expected they’re not as large as the Black Minorcas. We bought one of the Ideal 236 chicks as a tagged female but the other two Ideals were straight-run chicks so we still don’t know whether those two are male or female.  None of them has begun to crow yet so we’re hopeful they’re all three hens.

I’m expecting our hens to start laying eggs in a couple of weeks as I’m reading that they begin laying at around 17 weeks. In preparation we’ve fluffed hay in the nesting boxes and added a few white golf balls in various boxes – I’ve read that entices them into the boxes when it’s time to lay.  Again, I’m a greenhorn so it may very well only entice them to play 18 holes of golf!  LOL

So far other than our one overnight marauder, raising these chickens has been lots of fun.

* Affiliate Links – We are currently enrolled as an Amazon Affiliate. Occasionally I will insert an affiliate link into one of my posts if I think it may be of interest to you, in this case a chicken coop that worked very well for us.  We purchased this coop ourselves and receive nothing from the manufacturer, but we were pleased with it and thought you would be too! If you click on one of those affiliate links and buy something (almost anything, not just what was linked) I get a small referral percentage – the price you pay for those items is UNCHANGED.

When you buy something through the affiliate link it’s a great way to support this blog without anything coming out of your pocket so click often! (you can read the legalese here…)