Recently a smart friend shared her recipe for making what she called ‘Haymaker Punch’. She uses this healthy drink as her own homemade Gatorade during the summer. ‘

I’m a big fan of carbonated ginger drinks so I couldn’t wait to try it out! 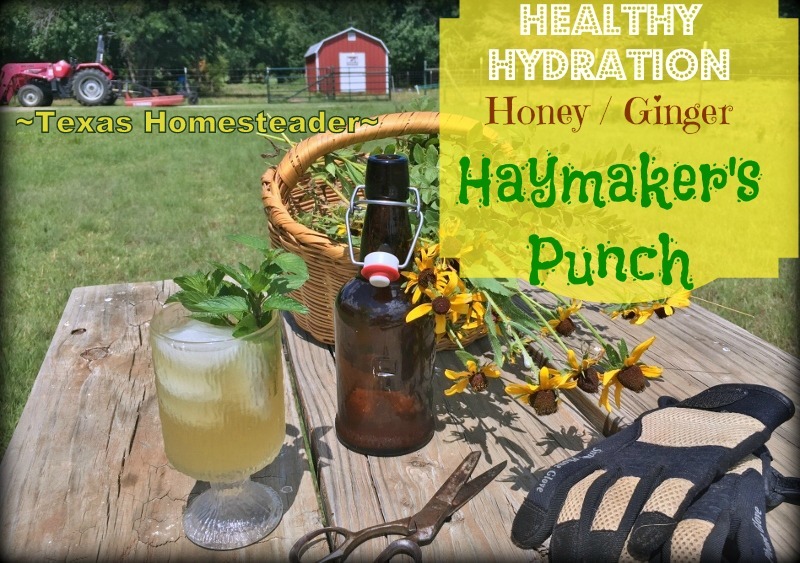 One of the job hazards of being a homesteader in Texas is the heat & humidity you’re subjected to during a typical Texas summer as you go about your daily tasks. WHEW!

It’s really turned hot out there, but I’m not afforded an air conditioned job behind a desk anymore. (not that I’m complaining!)

These days I need to be in the garden, on the tractor or maybe at the barn. Much of my responsibilities involve me working outside.

Haymaker Punch is named for the days gone by when farmers used to drink it to keep hydrated during the summer when they were out in the fields all day. (I think it’s also called Switchel)

It makes sense to use ACV – I’d always heard of folks consuming small amounts of ACV daily for various health benefits. But I’ve never done it before because although I know it’s healthy I didn’t think I’d be able to stomach a big ole spoonful of apple cider vinegar by itself.

I know honey is a healthy food too. I’m ALWAYS interested in honey! And who doesn’t love ginger ale? Maybe I should give this  a go.

Shopping out here in the boondocks it could be a problem finding fresh ginger.

So the next time RancherMan & I went to ‘the big city’ I stopped into a Sprouts market and found a large fresh ginger root & a bottle of organic, raw, unfiltered ACV for under $5. Score!

If you make this drink you’ll also need some16-oz grolsch-style bottles with the wire & ball stoppers. I found some of those reusable bottles on Amazon *here. 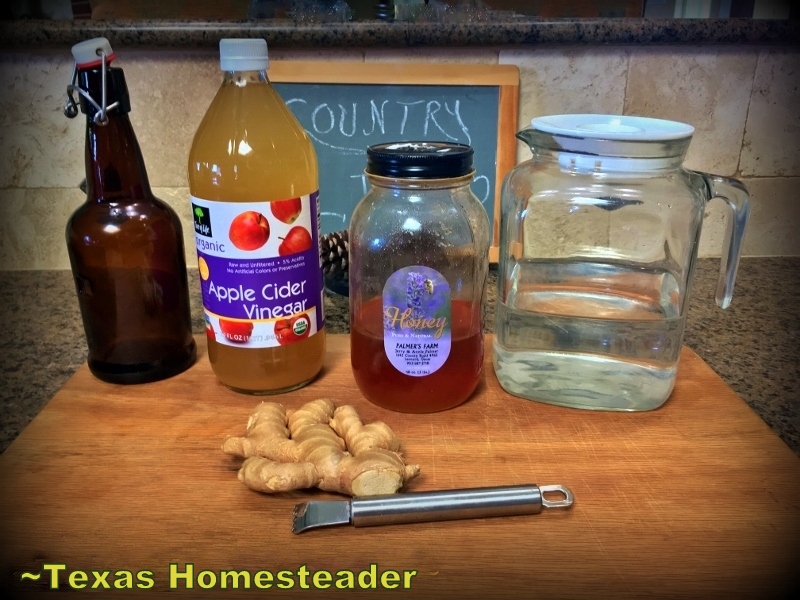 My friend said that after mixing the drink you should seal the bottles & leave them on the counter for 2-3 days to allow it to carbonate.

Then after that time you move the sealed bottles to the refrigerator to slow or stop the carbonation process.

Even though the carbonation process slows to a crawl when refrigerated, she cautioned that when opening these bottles you should open slowly at the sink.

And she said to only open the bottles when the beverage is very cold to prevent powerful over-pressurization or the drink foaming out of the bottle and making a mess.

Playing With The Haymaker’s Punch Recipe

Of course as is apparently my nature, I didn’t follow the recipe exactly. I initially decided to make mine with double honey & ginger just because I thought I’d like it that way.

I wonder what my haymaker’s punch will taste like? Would it be too sweet? Or would it taste too much like beer? (I’m not typically a beer drinker) Maybe heavy ACV flavored?

After that first sip I felt that the quantity of honey I used made the drink was a little too sweet for my taste. But otherwise it was absolutely delicious!

As a beer brewer I asked RancherMan about it. He said if I left my bottles of Haymaker Punch on the counter for another day or so before placing it in the refrigerator it would be slightly less sweet and more carbonated.

So I reduced the amount of honey & left the bottles on the counter for an extra day before refrigerating. That was the balance I was looking for & it was perfect for me. Here’s what I did:

Mixing Up The Haymaker’s Punch

I sanitized my glass bottles first by washing them with soap & water, then ran a little bleach water through each of them & rinsed them thoroughly.

Then into my pitcher I stirred in 2 quarts of filtered water, 1/2 cup ACV and 3/4 cup honey.

Finally I grated some of my fresh ginger root and added 1 Tablespoon of grated ginger into each bottle.

Finally I poured the liquid into each bottle using a funnel. I filled each bottle just to the bottom of the neck and it seemed to fill all 4 of my bottles pretty well.

The next time I made this drink I decided to experiment with the recipe again (I’m seeing a trend here, are you??  I just CAN’T seem to follow a recipe without playing with it!)

Although I’m not a beer drinker per se, I love Seagram’s Blueberry Lemonade flavored beer. So I thought I’d add a little blueberry flavor into this ginger drink.

Into two of my bottles I added a Tablespoon of frozen blueberries so I could try a ginger/blueberry-flavored version.

Then I fastened the tops of each of the bottles and gave each one a swirl to make sure all ingredients were mixed.

I tied a ribbon around the necks of the two blueberry-flavored bottles so I’d know which ones were blueberry flavored. Then all four bottles sat on my kitchen counter for 4 days. After that time I moved the bottles of Haymaker’s Punch to the refrigerator.

I also made minty ice cubes by infusing some filtered water with crushed leaves of the fresh peppermint growing in my garden. The minty refreshment seems to blend beautifully with this Haymaker’s Punch.

And hey, I have a beautiful mound of mint in my front beds. Why not use it to even further enhance the refreshment? Looks like there will be many flavor options for this punch! 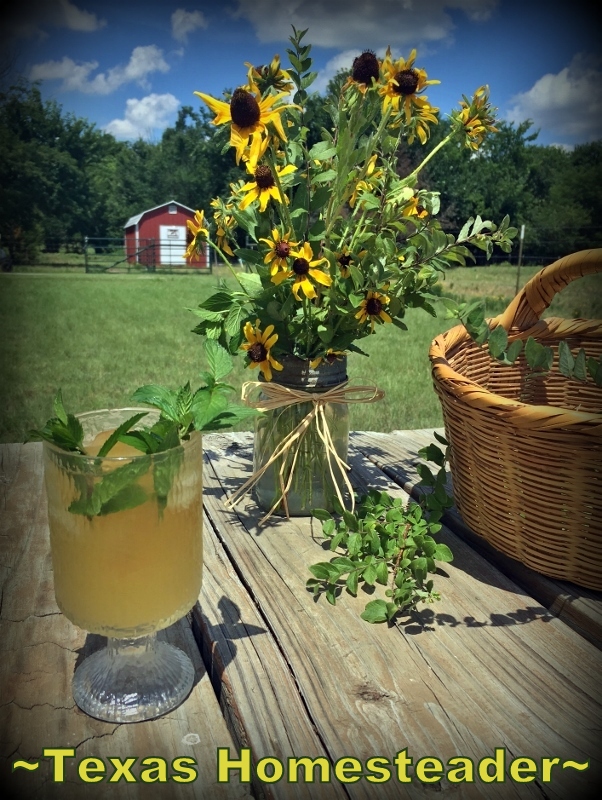 So after a hot day of work recently, RancherMan & I retired to the back porch to watch the sunset as we typically do.

I pulled a cold bottle from the fridge, dropped a couple of ice cubes into a small glass and poured the drink over the ice using a sieve to filter out the ginger pieces.

Aaaaahhhhh, refreshing! With one sip I knew I had a new, healthier favorite drink. I think I’ll keep the fridge filled with these Haymaker’s Punch drinks for the rest of the summer.

Now that I have my proportions to my liking, I think I’m in love!  Here’s the recipe as I amended it: